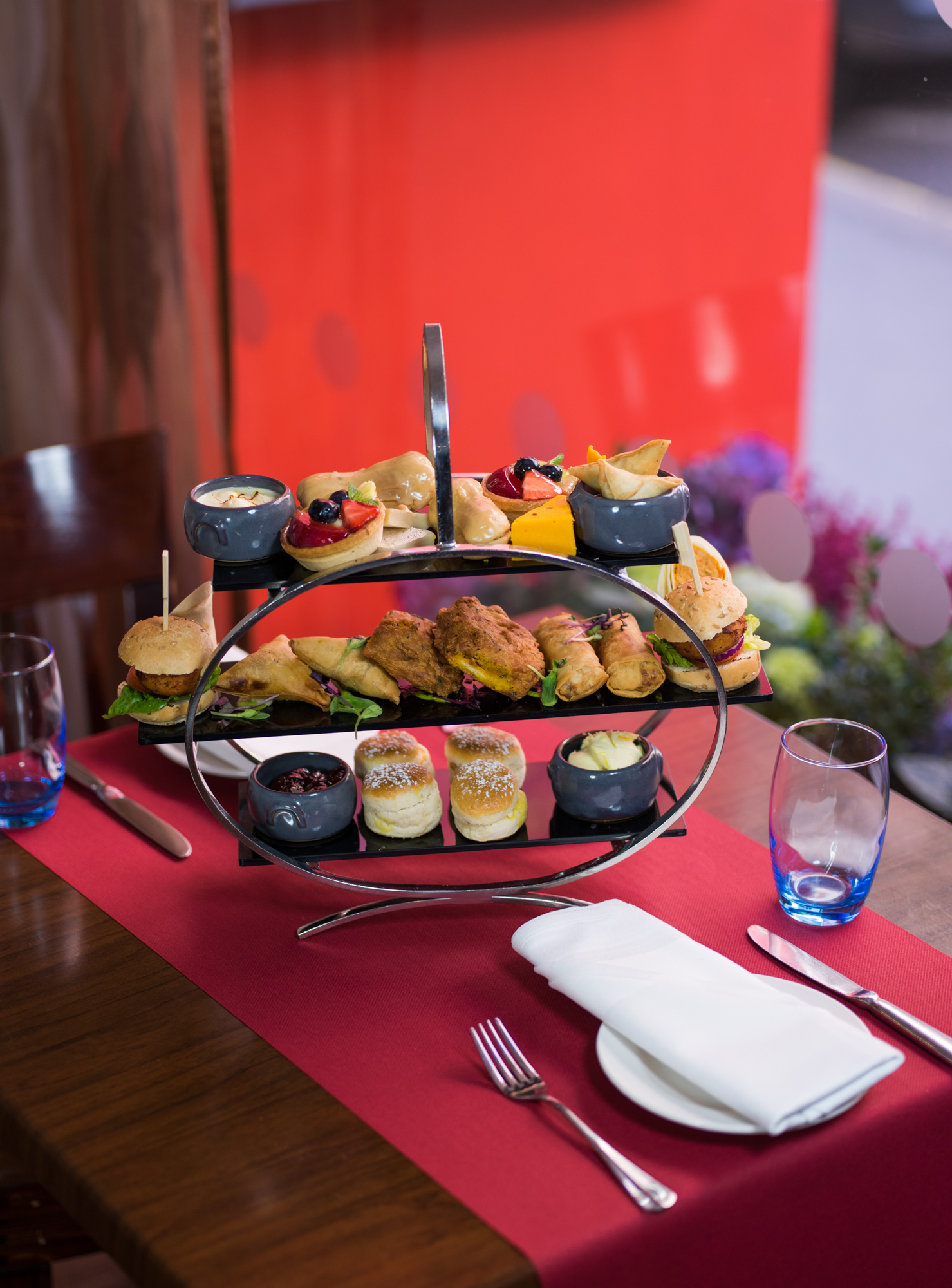 Sure you can enjoy the traditional option but with Britains most popular food for the last decade being a Chicken Tikka Masala, these days there is nothing more British than a curry, so the Daawat Taste Of India Afternoon Tea is fantastic modern take on this most British of traditions.

We took our tea in the Daawat Restaurant, a large slightly soulless Indian restaurant which livened up as the amiable and knowledgable staff explained the afternoon tea options to us and more groups started arrived for lunch or tea. If we were to go again we’d try enjoy the tea in the hotel’s Lounge Bar for a slightly more buzzy atmosphere. However a friendly and informal service coupled with the lack of a dress code means that the stuffiness often associated with some teas is totally absent leading to a totally relaxed and enjoyable experience.

Arriving on a three layered metal platter, award winning head chef Asharaf Valappil has created an exciting selection of Indian sweet treats and savoury delights which work alongside the beautifully baked mini scones complete with a light smear of lemon curd on them. A sour note which set my tastebuds into a bubbling frenzy. Once you’re done with the scones the food becomes more dramatic and packed full of flavour, expanding my foodie horizons with items I was getting to sample for the first time.

The top layer of the platter is home to a selection of desserts, many of which I’d seen on menus in Indian restaurants but I’d never put in my mouth hole before today. The chocolate samosas were decadently filled with rich dark chocolate and wrapped in a light crisp pastry alongside a refreshing mango coulis dip, it was an scrumptious Indian take on a chocolate crepe. The silver leaf topped cashew roll was delightful as was the mango burfi which may look like a chunk of Red Leicester cheese but could not be further from it with its super sweet mango infused milk making this the most moreish dish on my plate.

The savoury snacks were all beautifully spiced with a balanced flavour punch which never dominates or overpowers. The Bombay Burger, a potato slider really, was scrumptious, the paneer bread pakora was an unusual and tasty take on a melted cheese sandwich with the paneer being deep fried in a bread fritter and the Kolhapuri Wrap was full of incredible Rajasthani spices which I’d have happily eaten more of. In fact there wasn’t a single item served to us that was a dud, even the fried items came out grease free and delicately delectable.

This is a truly original and decidedly delicious Afternoon Tea and with twelve different dishes alongside the scones per person this was quite a banquet with more than enough to eat and blooming good value considering the prices of some of the more fancies afternoon teas London has to offer.