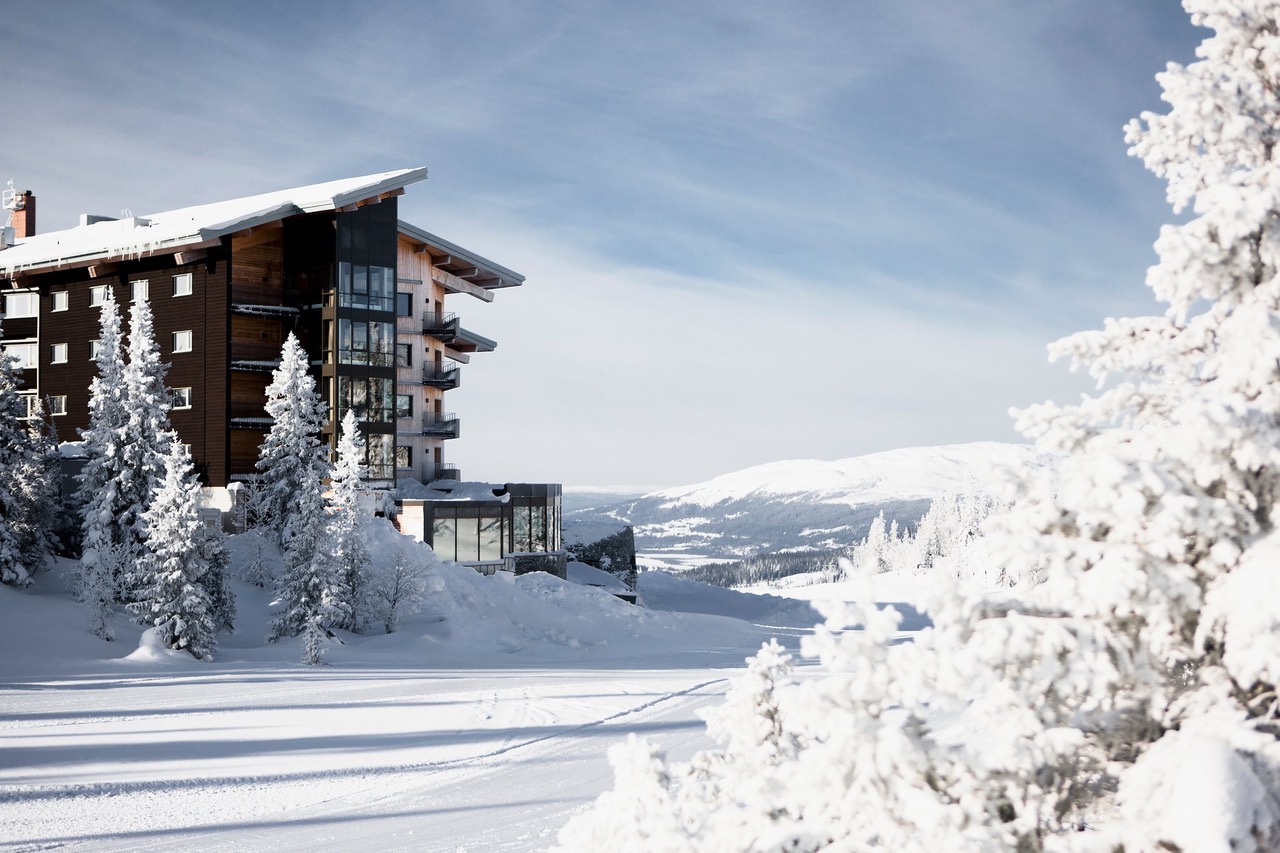 I am not one for extreme cold. Not until I learnt to ski could I appreciate the winter wonderlands of the Alps and beyond; and now grounded thanks to a skiing accident, the idea of going to Scandinavia’s major highland resort of Åre without being able to ski was a daunting one. The Beast from the East was already in full force across Europe, with London plunged into chaos thanks to a dusting of snow. However in Åre Sweden, temperatures dropped into the minus 30’s so any outdoor activity looked dubious but the Swedes are built of sterner stuff and “The Beast” was to be tamed.

On a rather chilly morning I headed to Gatwick to fly to Östersund, a very handy connection for Åre with only a hours transfer the other end by car compared to the two and half from Trondheim in Norway. Coming in to land it was like touching down in Narnia – as far as the eye could see was snow. Even the walk across the runway was an experience, trudging through the thick snow whilst passing the Ski In/Ski Out door to arrivals (still not sure if this was a joke or not?!?). Our host Johan Landorf of MIDLAND SCANDINAVIA, greeted us as we came out of baggage collection and ushered us to our quick transfer to our hotel in Åre, the luxury Copperhill Mountain Lodge. It is worth noting here that although we went by car (thank god as it was still -15 outside) you can transfer to Åre via skidoo or Husky Sled on request, it might take you a bit longer but what an experience? Cannot imagine being able to organise that from Gatwick!

For more than 1000 years people have lived in the foothills of Mount Åre. 1000 years ago Åre’s surrounding areas were inhabited by the fearsome Vikings, which can be seen in the names of the nearby villages, like Fröå and Ullå which descend from names of two Norse Gods. In the 18th and 19th century the copper mines in Fröå were important industries then tourism started to grow with the establishment of a railroad in 1882. The name, Copperhill, goes back to that history of copper mining around Fröå which is about 2 km from the hotel. Copperhill Mountain Lodge, which is situated on top of Förberget in Åre, is almost entirely made of wood, which makes it one of Europe’s biggest wooden constructions, and as you enter you are welcomed by a lobby with 22 metres ceiling height and a fireplace that reaches all the way to the ceiling, quite a magnificent entrance that is for sure.

We hit the ground running with a lovely lunch with our Co-Host Mariann, upon arrival at Copperhill Mountain Lodge. Such specialties as Reindeer Stew (Mmmm Rudolph) or the Copperhill Burger are a must, hearty wintry delights that will set you up for a fun packed day out in the snow. Within Copperhill Mountain Lodge there are 112 rooms and suites with a total of 420 beds. There is are six conference rooms for up to 500 people, an award-winning spa, a restaurant, bar, ski rental, gym, and it has its own helipad. After checking in, unpacking and doning almost all the winter gear I bought with me it was time women up and bear the cold to experience one of the most exhilarating high octane winter pursuits: skidooing.

I have skidoo’d once before in Finland, I thoroughly enjoyed it so I was really looking forward to this activity but boy was it even better! After suiting and booting with JA Event, who run the skidoo treks (you wear essentially what is a very warm biker onesie that you can borrow if you do not have the necessary gear) we headed off in a very small group of four skidoos into the wilderness. We wound our way up the designated skidoo routes to a frozen lake, where you can really let it rip (sorry Johan), and then beyond to a quaint little restaurant where we had tea and cake. Bergstugan restaurant is operated by Carolina and Johnny Fredriksson, Johnny previously worked at the two star restaurant Fäviken Magasinet for several years under chef Magnus Nilsson so the food although homely is top shelf in terms of quality and taste, I loved my Gluten Free and Sugar Free Energy Ball!

After our pit stop we went off track deep in the wilderness in search of Reindeer, as we climbed the similarities for Åre to Narnia were increasing, not a soul in site and just snow covered trees as far as the eye could see, all that was missing was The Snow Queen, laiden with Turkish Delight, crossing our path! As we reached almost the top of one of the peaks we spotted Reindeer, this was just as sunset hit and the sky blushed in hues of pink and peach that sharply contrasted the wintry blue of the mountains; it was truly breathtaking and almost brought one to tears just appreciating the true wonder of nature. Despite almost freezing to death (slight exaggeration but boy was it cold when the sun went in) this was a totally unmissable experience, from reeving it to the max across frozen lakes to off roading up to witness wild Reindeer; skidooing really is exhilarating.

Back at Copperhill Mountain Lodge it was time to de-freeze in my his and hers shower, yes that’s right two rain showers coz one is never enough, and head to dinner in-house at the restaurant on the lobby floor. We enjoyed an amazing tasting menu with matching wines and ended the night with a nightcap by the fire. Snoozy, it was time for bed for morning was to  bring even more winter adventures.

After a hearty breakfast (buffet style with everything from fresh cooked eggs to healthy options, Scandi favourites to gluten free) we headed to the Ski Room area on the lower ground floor to meet Explore Åre who had organised a small Snowshoe expedition for us. I had never tried Snowshoeing before, it looked rather complicated and maybe less exciting than skiing so had never given it much thought – oh how wrong I was. After being strapped in and explained how one can either have your heel locked in or free we set off. Within literally seconds we were in snowy wildernesses gliding across the 6-7 foot snow with ease. It was amazing how peaceful a pastime snowshoeing is, with only the sound of the snow lightly crunching it is all but silent, a true mindfulness pursuit where you are one with nature, I could have got used to it except I would have to adapt to Mud-Shoeing in the UK!

Up next was one of my favourite winter pursuits, and maybe the cutest; Husky Sledding. We headed to Riverlodge Huskys, which is run by the very talented Husky handler and Award Winning Photographer Nicklas Blom, to experience one of the oldest mode of transports in Scandinavia. After meeting all the huskies (OMG Grey stole everyone’s hearts) and getting them all geared up for the sledge we took it in turns to ride across the frozen lake that borders Nicklas’s operation. With the winter sun peeking through the clouds and only the sounds of the dog feet on the snow this too is rather a peaceful pastime, and boy had my Narnia metre hit 100 by this point as we enjoyed hot chocolate and cookies by the fire after sledging! Riverlodge is a slightly smaller husky operator, and I really liked that as it was more intimate, but Jonan and his team at MIDLAND SCANDINAVIA are quite at ease organizing much bigger groups if that is required, but then you would miss out on Grey and his adorable face!

After a day of full blown winter wonderland it was time to add one more “only in Scandinavia” pursuits to the list, dinner at Buustamons Fjällgård via snowcat. The restaurant is up a hill and as such is only accessible via ski, foot or snowcat; it was so surreal being dressed for supper boarding a World War II vehicle in the driving snow to get to dinner, but what an experience! After a short trip in the dark and negotiating getting out and down the 5 foot drop from the cabin we were at our final stop, Buustamons Fjällgård, a charming environment, 732 meters above the sea, where their kitchen finds inspiration in the local products of Åre. We enjoyed typical smoked Herring (it’s not as bad as you think) and homemade Schnapps which is made on site in the basement, we were also serenaded to by Johan with a typical Swedish song that had something to do with singing to the Schnapps; all in all an utterly delightful evening that ended with a return journey back down via snowcat, something Uber might want to add as an option in Sweden from now on?

The last day I chilled out in the rather Instagramable spa, where panoramic windows facing the scenic mountains connects the pool with the slope outside and where you will find steamy baths both outdoors and indoors, warming saunas and  relaxation areas plus treatments or all kinds are available day and night. I opted for the Big Bang where you get a massage with warm oils that will take care of your tired muscles then finally a face ritual to cleanse and moisturise the face. I came out clean, smooth and relaxed all ready for my last outing before heading back to the UK. Before lunch we headed into the small town to have a look around, the original Peak Performance shop still stands in the centre as well as the oldest funicular railway Åre Bergbana which was installed in 1908. There is a good section of shops, restaurants and bars in town as well as the railway station that connect Åre to Stockholm, Trondheim and beyond, so it is worth a look around even if just for the craft shops where I picked up a rather nice vintage ski poster!

Back at Copperhill Mountain Lodge it was time to leave, it had only been 48 hours but what an experience. I am still not one for extreme cold but if you have such pursuits as skidooing, snowshoeing and husky sledding one could almost forget the temperature. My partner has always banged on about how amazing Scandinavia is and in particular Sweden, after experiencing Åre I can now understand why! The mountains and wildernesses are breathtaking, the food and drink can be unusual but tasty but most of all the hospitality of the Swedish shines through. From the staff at Copperhill Mountain Lodge to Johan and his team at MIDLAND SCANDINAVIA everyone we meet was so happy and hospitable; I think the fearsome nature of the Vikings was all a myth as all I meet were lovely jolly friendly people who wanted nothing more than to raise a glass with you and toast life. Skål Åre – thanks for some amazing memories.