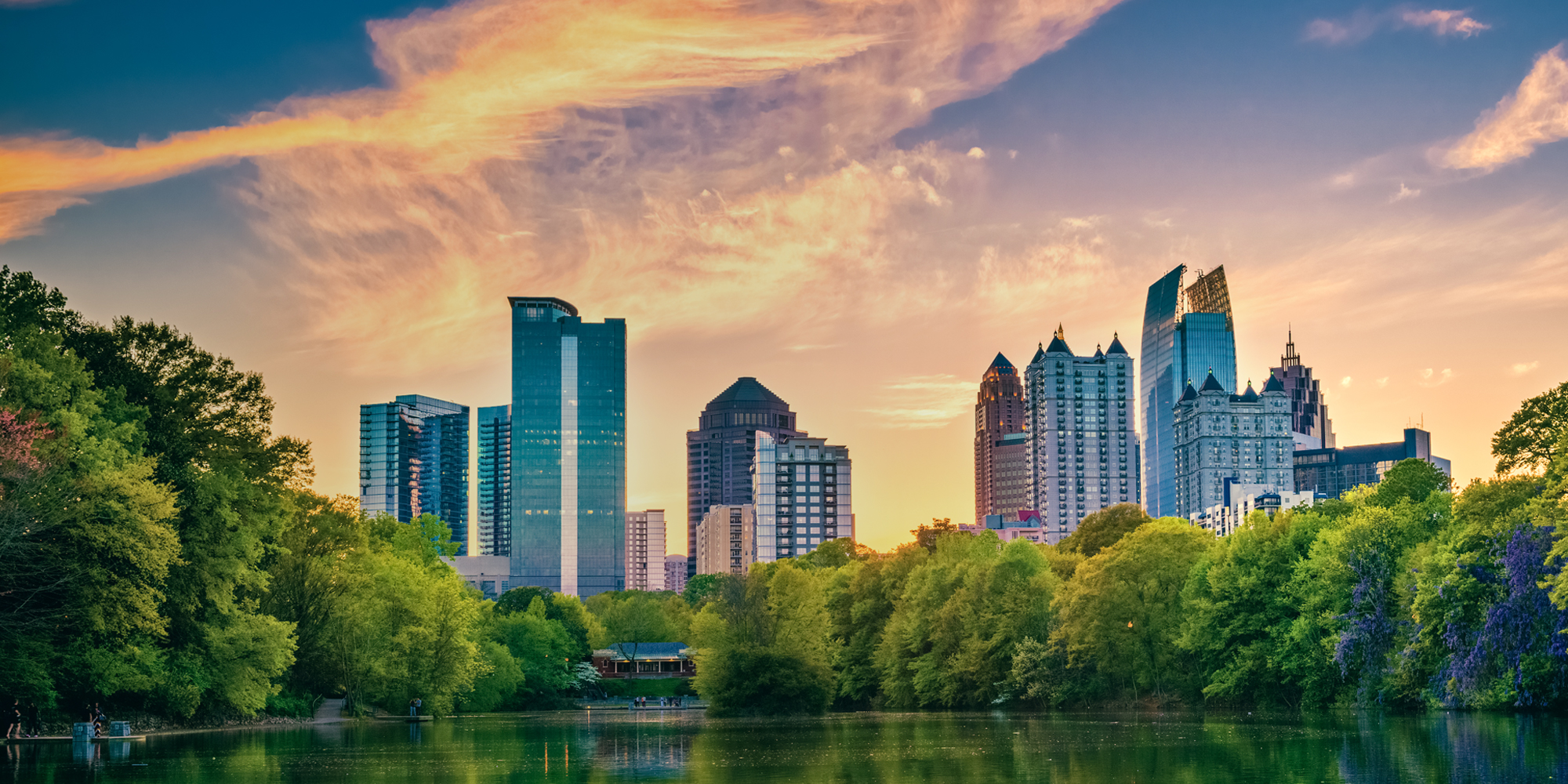 Atlanta’s sprawling metropolis, a cosmopolitan melting pot of different cultures, is a testament to the sweeping power of diversity, it’s civil rights history acts an important backdrop to any traveler’s jaunt through Georgia’s capital. It is undeniable that, like any large city, it has its problems with homelessness and other issues, which you will most likely not even counter. In any case, this should absolutely be tolerated in order to obtain the city’s rich historical, cultural and culinary treasure trove.

The host of the 1996 Olympics, Atlanta’s downtown is littered with relics from this time, Centennial Olympic Park makes for a lovely walk on a sunny day, complete with picturesque gardens and commemorative instalments, this is a great starting point located right in the heart of the tourist district. Nearby attractions include the colossal, Georgia Aquarium, spiritual home of that famed dental nemesis, the ‘World of Coca-Cola’ and the ‘CNN Studios’ which will essentially take you to see the backstage workings of their main newsroom, complete with teleprompter, green screen weather map and even giant touch screen, election night devices used by news anchors to decipher the nights events. Also be sure to spend an afternoon at the Civil Rights Museum, a tough, but incredibly important experience, it is a truly overwhelming experience to be confronted with demons from the past of this country. Leave feeling drained emotionally, and empowered spiritually.

A firm favourite of mine is the Ponce City Market, located just east of Midtown, it is a one-stop shop for all number of Instagram worthy, sometimes kitsch, sometimes undeniably trendy independent stores and eateries. Housed in a huge ex Government building, the red bricks and industrial guts of this building juxtapose and yet somehow blend seamlessly into the plethora of fantastic ramen bars, fried chicken stops, French cooking stores, swanky bars, and a host of independent traders, bookshops, more traditional fashion brands and god knows what else, combining in an eclectic, social media whore’s, picture perfect orgasm.

For those looking for a little natural refreshment from the city’s buzz, head to Stone Mountain, located about 30 mins from downtown ($35 each way in an uber). Avoid the theme park like attractions and head to ‘The Cherokee Trail’ for a woodland hike through the Southern shrubbery, with flora and fauna, canopy and paths to match. Emerge from the 30-minute hike at the stone precipice overlooking the surrounding forest and glistening capital in the distance, and those wishing for an easier ride can take the gondola down for an $8 one way fee. Taking this way down also enables a great view of the Confederate Memorial Carving etched in to the mountainside, depicting Stonewall Jackson, Robert E Lee and President Jefferson Davis on horseback. Following this make your way to the Stone Mountain Lake, the sparkling lakeside views offer a reprise from the harsh, historical, stoicism of the broad mountain. A range of aquatic sports including Paddle Boarding, Kayaking, Pedalos are offered from the REIT lakeside rental hut. Rent a Kayak for $30 to explore the lakes winding edges, amphibian inhabitants, and twinkling currents.

Beneath this unassuming, burgundy bricked exterior shop front lies a truly special culinary experience. The Staplehouse restaurant serves inventive, neatly presented courses that bulge with flavour, tussling with the senses to command and seduce the lucky diner into a state of foodie, comatose bliss. The 10+ plate tasting course comes in at a well placed $140pp, including gratuity, wine pairing is available for another $65. Booking is HIGHLY recommended, definitely one to check a few weeks in advanced. Meal highlights include a delicate swordfish, cucumber rice, course and the aged beef plate. In spite of the 10 or so plates, the portions still feel a little small, perhaps not one to take on if you are completely famished. Not necessarily a negative, just something to be aware of. Also please note, this traveler is a 6ft4 ‘growing boy’, with a very healthy appetite. All plates come presented in immaculately detailed splendour with the panache and flare one expects of a vibrant city such as Atlanta. A definite tick to Staplehouse comes from the fact that this restaurants puts a lot of its profits in to a charity that helps restaurant workers deal with traumas, whether it be through financial or emotional support, a nice point to note.

Sushi savants should give Tomo at the Ritz Carlton a try, warm browns and creams emblazon the interior, the setting is upscale, sophisticated without being cold. Full-length windows bound the restaurant uplifting and illuminating lunch whilst offering an assured intimacy to an evenings dinner. A high price tag accompanies, this should, however, come as no surprise given the restaurants illustrious surroundings. Give ‘Tuna Tuesdays’ a go, for a melt in the mouth, full flavoured take on the prime steak of the marine world. Service is efficient and attentive, I wouldn’t say welcoming, but nevertheless worth enduring for the delicious cuisine ‘Tomo Naito’, whose story from theatrical direction to cooking via Nobu, Italian restaurants, and a Japanese seafood trading company is one worth looking in to.

Stay at the Four Seasons Hotel in Midtown, in order to position yourself ideally a short uber ride between the business district and tourist hub of downtown, the upscale luxury of Buckhead, and your location which is somewhere in the middle of both, complete with great restaurants, bars all on your doorstep, without some of the negativities that come with staying in the heart of the tourist district of downtown. The grandeur and decadence of the exterior and entrance give way to a little more minimalism within the rooms, some see this as a downside, feeling a little shortchanged upon entry into the room. In my opinion, this is actually quite a nice addition, but I’m not one for the tacky opulence which exudes from some other hotel chains as they attempt to dazzle with sublime splendour. Rooms come in at around $400, dependant on seasonality.

As with any city, here in Atlanta, there is a wealth of experiences to suit any budget. This, however, more so than a lot of cities I have been to I think truly embodies the notion that luxury does not necessarily have to include a hefty price tag. Find yourself some Georgian gems amongst the hubbub of the Atlantan buzz, they’re most certainly out there.