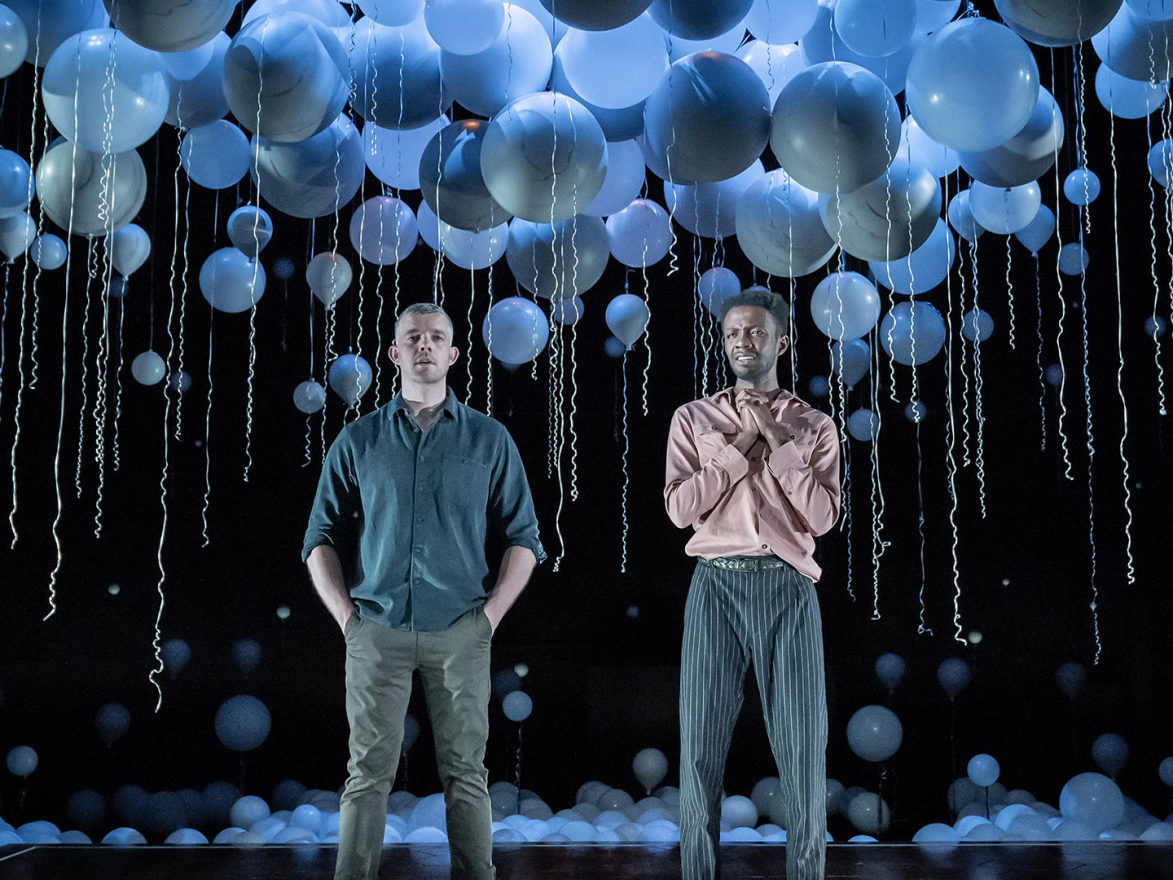 Four different pairs of actors are taking on Nick Payne’s accomplished 2012 play Constellations, Sheila Atim and Ivanno Jeremiah, and Zoë Wanamaker and Peter Capaldi have already appeared as cosmologist Marianne and beekeeper Roland. Now, it’s the turn of the first same-sex casting, Russell Tovey and Omari Douglas and alternating with Anna Maxwell Martin and Chris O’Dowd. On the night I saw the show I had the awesome pairing of Russell Tovey and Omari Douglas. Here we have a name changed from Marianne to Emmanuel, but the plot remains the same with a few nuances of dialogue changes.

The story looks at the possibility that as Emmanuel says: “In the quantum multiverse, every choice, every decision you’ve ever and never made exists in an unimaginably vast ensemble of parallel universes.” Here we see how the two character’s life’s can be interchangeable by which path they take leading to the same dialogue being used in a multitude of variations of the same scene.  The two actors really showcase their skills, as an audience member you can go from loving Roland to disliking his actions and vice versa with Emmanuel.  Your emotions are catapulted from happiness to sadness in one microsecond.

One of the moving scenes is a sign language scene, which is touching to see and easy to follow with the expression Tovey and Douglas use to convey a scene which is played in silence, helping you to identify with the characters more.  Another stand out scene is a ballroom dance lesson which we see various possibilities and you find yourself rooting for the characters and eager to see how it will play out.

In this version rather than boy meets girl we are treated to an acting masterclass from boy meets boy with Russell Tovey and Omari Douglas. This play is about time, grief, love, humour and asks big questions about existence, purpose and free will. It is playful and uplifting but also sad and moving. Tovey and Douglas take you on an emotional journey and really draw you in to their world for 75 minutes, when the lights went down at the end and the duo received a well-earned standing ovation, I wanted more!

The set designed by Tom Scutt is simple yet effective, a mass of balloons with clever lighting by Lee Curran show the changes in the possible dimensions are characters are situated in.  David McSeveney’s sound design creates a suspenseful atmosphere as scenes change in a flash.

The Formula for this play is Tovey+Douglas E=mc2(Emotions= Masterclass in acting) it is must to see so I recommend you travel at the speed of light to book a ticket to this universally brilliant production.

The play is on till 12th September 2021 at The Vaudeville Theatre, tickets available via Nimax.