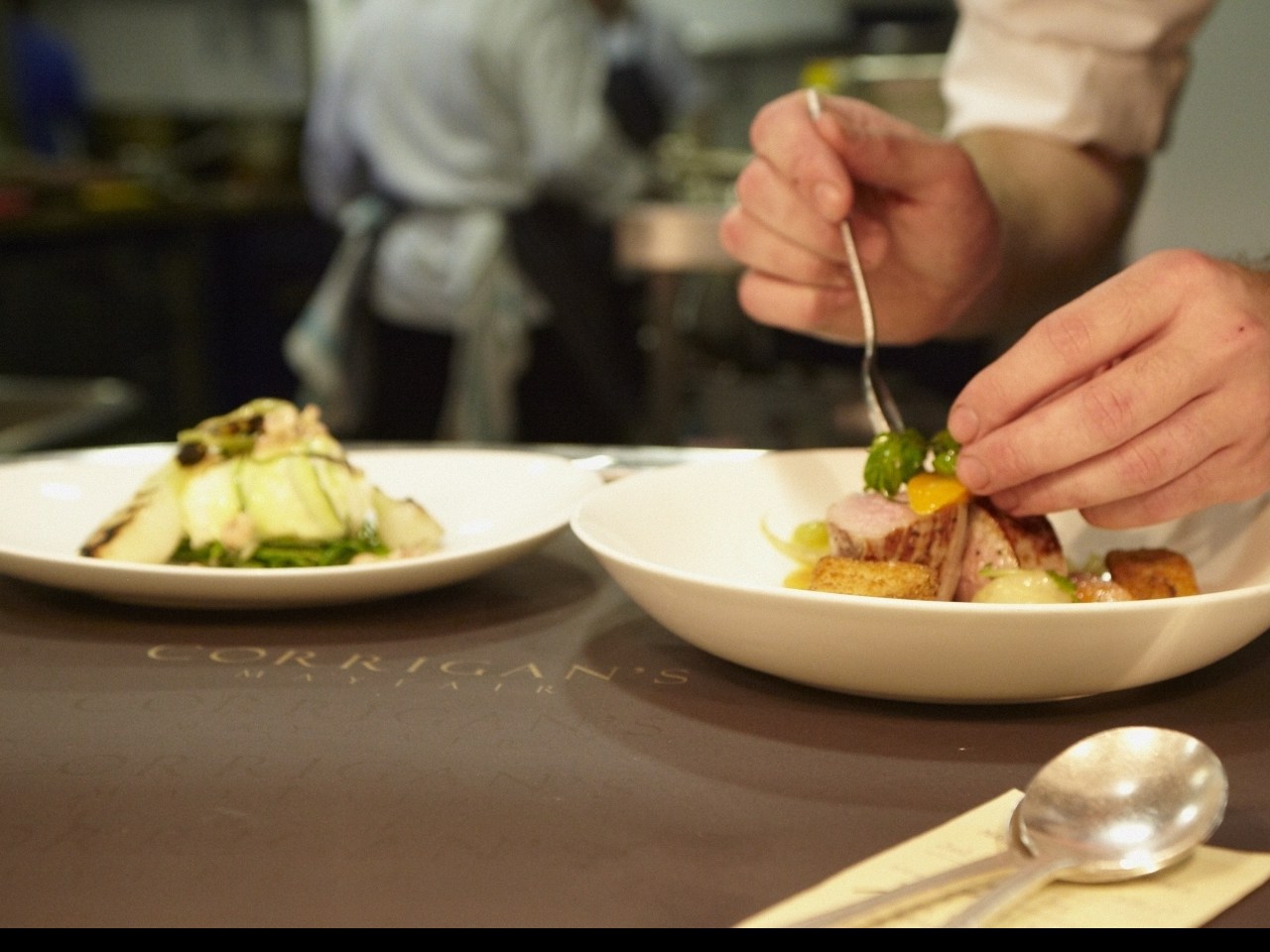 It was a balmy summer evening when we visited, having trotted around the corner from our accommodation at Grosvenor House, the JW Marriott hotel with which the restaurant shares its building. London seemed consumed with the kind of unbelieving daze that descends on the warmest evenings, as though locals and tourists alike are thrown into reverie by the brief absence of their coats. After being politely welcomed by assistant restaurant manager Alessandro, we were offered an apéritif. It seemed rude not to visit the bar first, since it lay between the entrance and the dining area, and it was from the lofty heights of my barstool, with a fine flûte of NV Paul Déthune, that I first surveyed the interior of the restaurant.

With a stag’s head in the restaurant logo, no diner would be surprised at the interior of Corrigan’s Mayfair. It has leather-and-wood décor that is classic without being old-fashioned and, after dark, the lamp-lit glow seems calculated to recreate the ambiance of dining at a country hunting lodge, fire roaring, wine flowing… Even on a summer evening, the effect is soothing; it might even be soporific if one dined alone, or with less than stimulating company (but who has time for that?).

Bartender David was very friendly (as all bartenders ought to be) and showed us some curious twisted metal objects that were on display behind the bar. These turned out to be unusual sculptures of birds, made out of serving utensils as though conjured from the unconscious fantasy of a hard working kitchen, that revealed an understated quirkiness of design that surfaced again when we realised that our dining table was flanked on each side by feather-shaded lamps complete with birds’ feet…

Our table was in a corner, allowing my dining partner and I to sit on the green leather seating on adjoining sides of the square table and all the better to enjoy the atmosphere. We made our selections from the menu and, before we had finished discussing our wine preferences (at length, as usual!) with the lovely sommelier Enikő, a selection of appetisers was served. We agreed, without much debate, that the duck terrine on gluten-free toast was the stand-out mouthful and were impressed that my dining partner’s dietary needs had been embraced rather than merely accommodated. Gluten-free bread was also provided in ample amounts, alongside traditional bread varieties for me.

Unusually, we had selected the same starter, the glazed Herdwick lamb sweetbread with broad beans and pine nuts, after we were informed that it was the favourite dish of owner and chef Richard Corrigan. The ideal dish for the summer, the sweetbreads were buttery in texture, with the herbs and beans adding a fresh dimension that was enhanced by a generous squeeze of lemon. The wine was a deceptively rich 2014 Pinot Noir Crystallum by Peter Maxx from South Africa’s Western Cape, which echoed the meatiness of the sweetbreads and completed a perfectly dreamy first course!

Our choices for the main course diverged substantially. I had chosen the roast saddle of rabbit, wrapped in Parma ham and stuffed with rabbit liver, with soft, creamy polenta and sweetcorn salsa. The rabbit liver was strongly flavoured but delicious, with the tangy salsa and the addictive saltiness of the ham providing a little extra edge to each mouthful. We had ordered buttered spring cabbage and mashed potato on the side, which was perhaps excessive, although both were oozing wonderfully with salty butter; the mash was similar in texture to the polenta I already had on my place and I felt unable to make much of a dent in it.

My dining partner had opted for fish instead, choosing the grilled red mullet with lobster and red pepper sauce (a choice she had already laid claim to upon perusing the menu in the room). It was visually impressive, with a large fillet, sitting on an island of sea vegetables in a veritable lake of glossy sauce. The marine flavours came through strongly and the mullet was firm, perfectly cooked with crispy skin. I could see my dining partner struggling to resist asking for some more gluten-free bread to mop up the last of the creamy bisque. We knew, however, that space must be reserved for the cheeses…

The cheese trolley at Corrigan’s comprises a wide variety of British and Irish cheeses. Selecting a few that took our fancy, such as the nutty sheep’s cheese Wigmore and the Bosworth Ash log, we soon found a favourite in the elderflower cheddar. This cheese managed to be simultaneously floral and tangy, which was a perfect complement to the out-of-this-world cheese biscuits and the fortified wine. The Domaine Mas Mudigliza 2012 Maury, from Roussillon, had an unusual creaminess that filled the mouth and was naturally, but subtly, sweet.

We diverged again in our dessert choices. Mine, predictably, was the fine chocolate tart, a slice of crisp pastry filled with heavenly mousse of 75% dark Valrhona chocolate. The vanilla ice cream on the side was, for me, a tasty but superfluous addition, as I had gobbled the tart before it had even started to melt. The chocolate was well accompanied by my final wine, a creamy, fruity Sauternes 2007 from Château Bastor Lamontagne, Bordeaux.

My dining partner chose her dessert using her own tried and tested method (“Is there a soufflé? I’ll have that!”) and was presented with a black cherry crumble soufflé, standing proud from its ramekin, with a light, fluffy texture and a hidden core of the succulent, deep red fruits. Alongside this, she was served a 2013 Moscato d’Asti, Contero, Piemonte. Light-bodied and pale, with flavours of peach and blossom, this wine also has a low alcohol content – just 5.5% – making it an excellent choice for the end of an indulgent dinner.

We drifted from the restaurant as though we were in a dream, bowled over by the delicious food and wine, as well as the excellent service. It was fortunate that we had no coats; in the trance of our delights we would surely have forgotten to collect them.