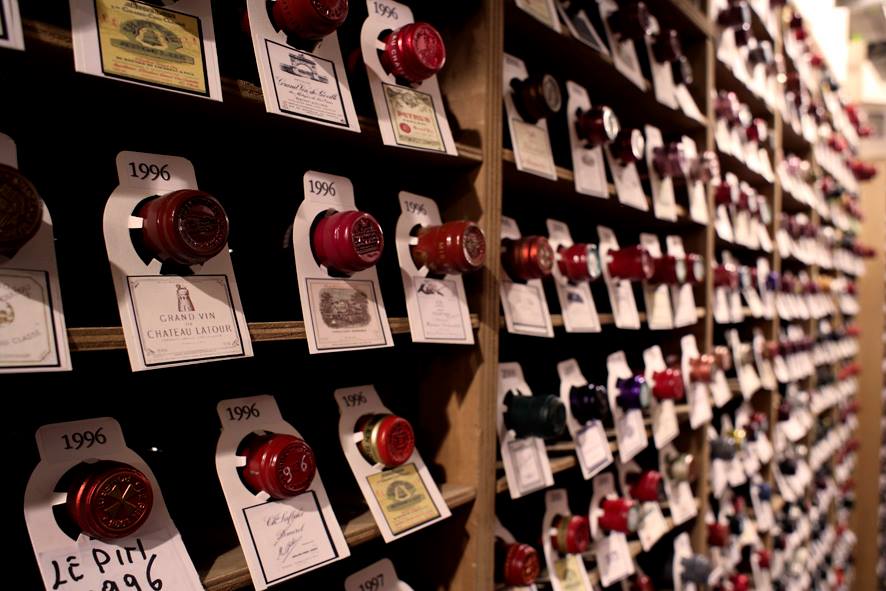 There are restaurants in the world that one dreams of having the opportunity to visit some day; from Noma to Arzak, some restaurants are mythical places that us mere mortals will never get to experience. Upon organizing our trip to Italy, there was one restaurant that was top of that list, the Italian gastronomic equivalent of the Ceryneian Golden Hind, Michelangelo’s David or that perfect pair of Salvatore Ferragamos: Enoteca Pinchiorri.

After a hop, skip and a jump from Milan we made it to Florence. Famous for its history, it is considered the birthplace of the Renaissance. So revered is the historical importance of this city it was declared a World Heritage Site by UNESCO in 1982. After checking in to the Lungarno Hotel, where we made full use of the facilities to glam up, we were ready for our night at this prestigious restaurant, in the heart of the city of the Medici family where both Michelangelo and Giovanni da Verrazzano were born.  Walking over the Ponte Vecchio, with the warm glow of Florence by night, Rachel and I were full of expectations, winding through the narrow streets, tottering on our Salvatore sling-backs, finally arriving at Enoteca Pinchiorri. The grand entrance, framed by granite pillars and flags, felt like one was entering an embassy, the welcome party of Annie Féolde, the only woman in Italy to hold 3 Michelin Stars, and Head Sommelier Antonio Rosolino was overwhelming, like dignitaries on state visit.

Before we even sat down, the charming and very knowledgeable Antonio gave us a private tour of the wine cellar. Enoteca Pinchiorri is famed for its wine cellar, with over 4000 wine varieties including prestige cuvées, large formats and rare vintages. It was a never ending cavern of bottles, cases, shelves with some of the most astonishing wines we had ever seen, from first production Château Margaux to a 19th Century bottle of Château d’Yquem, it was like being on a quest with each turn offering an even more surprising find. This was a wine cellar that even the gods of Mount Olympus would have been envious of, the historical importance of its contents second to none in the world and we were honoured to have been able to see it. Once back above ground, we were shown around the kitchens where we got to see Italo Bassi and his team at work. Like a donkey to a carrot, Rachel and I were now ravenous to try the food and wine of Enoteca Pinchiorri.

Sitting down in the dining room Rachel and I were raring to go, with so much choice from the à la carte to the Degustation menu it was a conundrum to settle on what to order. The remarkable Annie, also President of the Italian Delegation for Relais & Chateaux, was on hand to give us some pointers and suggested the Tasting Menu of 20 courses. Never ones to turn down a challenge, Rachel and I took Annie’s advice and ordered the “Whispers of Autumn”.

Pasquale, our lovely sommelier for the evening, suggested he would source the wine pairings from their bottomless pit of a cellar and, having already seen what was on offer, Rachel and I were more than happy to agree to his choices. While Pasquale went and prepared our first glass, we chose from the water menu an Acqua Panna, local still mineral water from Tuscany. The first five courses arrived as a starter, including light “capelli d’angelo” with tomato and oregano, “Brutti ma buoni” with peanuts, Amaranto crisp, pop corn “Crumiri” and Parmesan foam.  The pasta was perfectly al dente with a crunch complemented by the freshness of the tomatoes, the Brutti ma buoni was a meringue like food with a peanut butter taste, light and airy, the biscuit was sweet and salty with a Viennese biscuit like texture and the foam was cheesy as would be expected of a Parmesan foam. The little dishes complemented each other perfectly and went well with the Il Mottaggio pas dose Cantina della Volta that Pasquale chose as the wine pairing.

After this tempting taste of what was to come, Pasquale served our second wine, a Gorgona 2012 Frescobaldi, a truly remarkable wine. From the island of Gorgona, the smallest island of the Tuscan archipelago, located 18 miles west of Livorno, “Gorgona” is a white wine born from the collaboration of Marchesi de’ Frescobaldi and the island’s penal institution. The Frescobaldi agronomists and oenologists have worked together with prisoners, teaching them important skills that can be used at the end of their detention for an easier reintegration into society. The Gorgona wine comes from a small vineyard of about one hectare, located in the only area sheltered from strong sea winds, in the middle of an amphitheater that overlooks the sea. The prison inmates manage the vineyard, using organic farming techniques, and each vintage produces only 2,700 bottles. Now came the next three courses, marinated scampi with crispy pearl barley, lobster with beetroot, and mackerel with black cabbage. The scampi was crunchy and juicy with a buttery sauce that melted in the mouth, the lobster was a divine taste explosion of juicy succulent meat with sweet smoky flavours of beetroot and the mackerel with cabbage was salty with an iron-rich spinach flavour to the sauce.

Up next was octopus with pumpkin and coffee. Some may turn their noses up at octopus, thinking it to be slimy and rubbery, but not this octopus! Crisp yet soft flesh with a sweet nutty pumpkin puree, coffee pearls that burst in one’s mouth with an intense hit of flavour, all combined to create a truly awe inspiring dish and the best octopus I have ever eaten. With this dish, Pasquale served a Meursault Clos de la Barre 2010 Comtes Lafon, a punchy chardonnay grape variety wine.

Following this came the rather fun “bread” spaghetti with anchovy and Burrata, polenta agnolotti and stockfish stew and the intriguing tuna flavoured veal. “Bread” pasta was exactly that, spaghetti made out of bread, a very garlicky salty dish with soft like noodles strands of bread, a really enjoyable dish. The polenta and stockfish stew had the aroma of a clean, marine rockpool, soft light pasta with a creamy fresh sauce and the veal was a mindboggling dish that tasted like veal but looked remarkably like tuna, a very concentrated flavour with a meaty salty taste but soft flaky texture.

Moving from white to red, the next wine was a rather spectacular 2003 Domaine Perrot-Minot Mazoyères-Chambertin, a perfect example of blackberry fruit expressions in a red wine, surprisingly fresh with hints of espresso bean but not bitter on the palate. The wine was the perfect match for the next few courses including “Like potato in salmi” and pigeon sandwich. The “like potato” dish was a rather interesting offering of a sweet chocolate-like casing with soft potato inside served with a sauce tasting like a ragu with dense meaty rustic flavours.

The pigeon sandwich was a lovely dish, like game after a shoot, a juicy pink piece of pigeon with crunchy toasted bread served with a sweet like jam, a very hearty dish. We were now on to the last dish before the desserts (plural), the Moncenisio blue cheese in puff disks, tangy and creamy cheese with a sweet grape jam contrasted with bitter crunchy radish a great end to the savoury portion of the menu. Pasquale chose a Piantonaia 2008 Poggio Scalette to pair with this dish, another great choice by the sommelier.

With fourteen courses down and six left to go, Rachel and I forged on, for the next part of the menu was the sweet portion and, having seen the dessert section in the kitchen, we were filled with child like anticipation of the sweet delights in store. The wine with these dishes was a chilled Vin Santo Corsini 2001, a sweet wine produced in the Chianti Classico zone in Tuscany. First up was honey amber jelly and Sambuca petals, the honey light and not sweet with an Asian flavour of violet and blossom, the petals delicately hiding a pear sorbet which was light and refreshing.

Up next was Rachel’s favourite dessert of the night, dismantled “Cremino” – in essence a deconstructed Kinder Bueno – a chocolate disk with hazelnut, rich and chocolatey, perfect for Rachel’s chocolate carvings. The liquorice ring with yoghurt followed this, iced biscuits that reminded me of childhood but with a salt liquorice taste, served with fizz lemon foam and mango cornet, a sweet baby sized cornetto filled with tropical icy sorbet. We had made it, 20 courses, 20 extraordinary courses, while sipping our espresso and nibbling (unashamedly) on the petit fours we looked at each other in amazement at our victory. Sitting in the ornate dining room, we sat back and beamed with glee at the dishes we had been lucky enough to not only see but also eat.

Enoteca Pinchiorri is an inspirational restaurant that combines the Italian and French cultures through the partnership between Giorgio Pinchiorri and Annie Féolde, who in thirty-five years of joint collaboration with great passion have created something quite remarkable. The dishes on offer are of an Italian origin and in typical Italian style the simplicity of the ingredients are at the heart of each dish but served with the flair of the French. The passions of these nations are represented in beautifully presented and mouth wateringly tasty food.  Like gods at a feast we were spoilt with the offerings of the kitchen and the cellar. Upon leaving, we said goodbye to the delightful team and Annie and disappeared in to the misty gloom of the cold night. Walking past the Palazzo Vecchio in the Piazza della Signoria, the Gods starred down, all seeing, all knowing. Standing there between the Florentine grandeur, Rachel and I looked at each other and with a smile we continued on back to our hotel, for that night we too had been welcomed into the heavens.