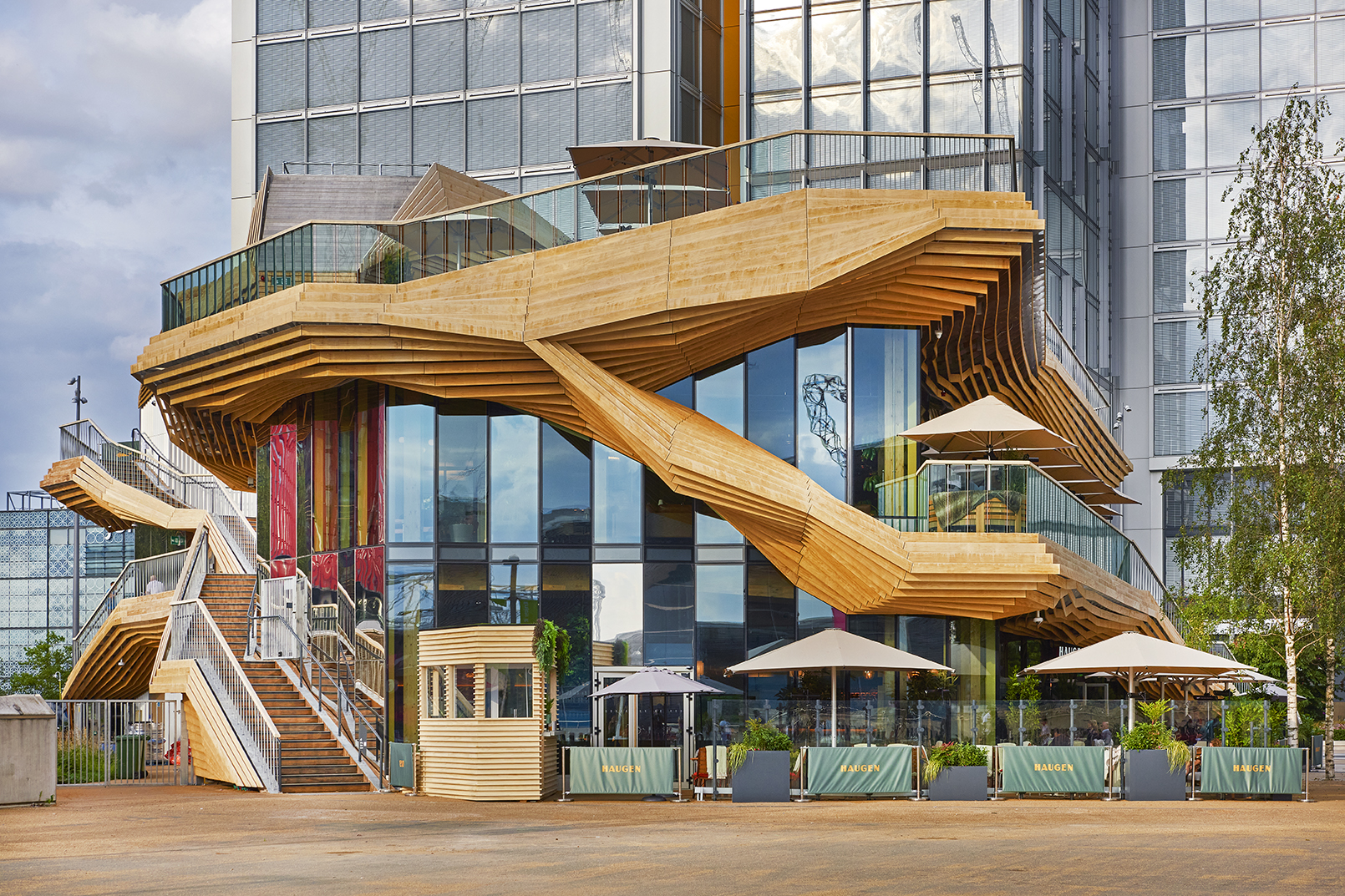 Alpine-themed dining in London is nothing new, but the opening of Stratford’s megaspace Haugen in September brought with it promises of après not found in those cosy West End fondue spots and chalet-themed winter pop ups.

It’s the latest endeavour from the D&D Group and with the likes of 100 Wardour Street, Bluebird, Coq D’Argent and Quaglino’s amid their roster of dining establishments across the capital, you can understand why they’ve gone big on getting the right vibe across. The all-day dining restaurant and rooftop bar overlooks the Olympic Park, just outside the back of Westfield Stratford, far enough away from the main thoroughfare to mean it’s its own entity and not part of the sometimes questionable Westfield food offering. Haugen’s menu, developed by Executive Chef Bjoern Wassmuth (from D&D London’s German Gymnasium), ‘takes inspiration from Alpine dining’, featuring modern version of classic Alpine dishes (though some also evidently from elsewhere… more on that later…).

It’s an impressive space housed in The Pavilion, a Bauhaus-inspired wood and glass building created by Acme with interior design by Afroditi Krassa. The name is a tribute to 1920s Norwegian-American ski jumper and winter Olympic hero Anders Haugen, and apparently is a celebration of Stratford’s role in hosting the 2012 London Olympics, despite those being the summer games. With a promise of fondue brunches and rooftop parties, it’s cited as the best spot in East London for Alpine dishes if you’re missing the slopes. With several long months until ski season kicks off again, we ventured down to try it out for ourselves.

The building itself is enormous, but given the less than favourable weather the night of our visit, a visit to the rooftop bar wasn’t on the cards. Downstairs the restaurant vibe is chalet cosy; think lots of pale wood, sheepskins draped over the back of chairs, faux fur throws, plenty of cushions and some very chic lighting. From a menu featuring some Mittel-European classics and German favourites inspired by Chef Bjoern’s German heritage, we began with a fantastic Wild Mushroom Rösti; with a rich crunchy potato, delicately sautéed mushrooms and crisp rocket, it’s worth coming for this dish alone, it was certainly our favourite of the evening. Herring ‘Hausfrauen Art’ (though no explanation of the name on the menu…) comprised rollmops herring with apple, onion and sour cream on malted rye sunflower bread and paired perfectly with a glass of the 2020 Bischöfliche Riesling, despite it being somewhat more Scandinavian than Alpine in flavour, in our humble opinion.

Upon discovering the favoured Croque Monsieur was off the menu for the day (if there any dish more comforting than a truly excellent Croque Monsieur?) we decided on the classic Chicken Schnitzel and its vegan counterpart for mains. The crackling crisp of the chicken married well with its fried egg garnish and side of caper and herb potato salad, even if it was a little tough in places. The vegan Seitan Schnitzel, while a tasty alternative to meat it felt an unnecessarily hefty portion; two ‘cutlets’ proved a bit much given its quite a heavy eat, though a nice change to see a vegan schnitzel on the menu.

Pudding was sadly something of a let down. Of course the Apple Strudel had to be sampled – surely the only acceptable dessert to have at any alpine themed dinner. Alas, despite getting our hopes up, it arrived cold in the middle and feeling a little lacklustre when it came to flavour and texture; it so easily could have been an excellent end to the meal and yet was quite the opposite.

Haugen will undoubtedly prove popular during the winter months – who doesn’t love an indulgent tartiflette or fondue when the weather turns – though the menus are slightly more skewed towards cold-weather comfort eating than light summer dining. With its DJ-fuelled rooftop and bottomless weekend ‘Off Piste Brunch’ it could easily become something of a summer hotspot, but if it really wants to challenge the big hitters of London’s alpine dining scene it really needs to up its strudel game.