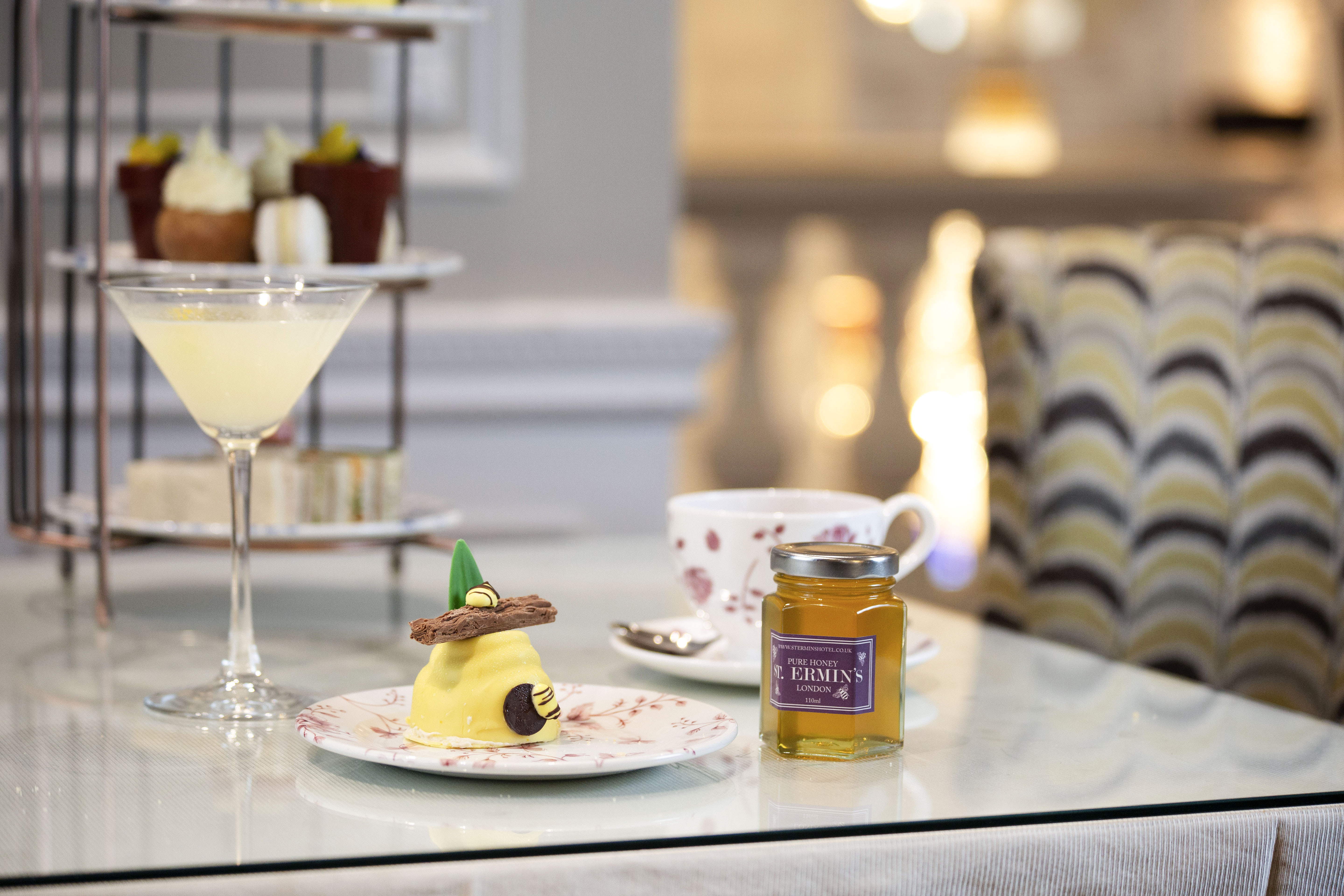 There’s a certain buzz around the Honey JuBEElee Afternoon Tea in the tea lounge at St Ermin’s Hotel! St Ermin’s is London’s only “Bee & Bee” hotel, housing over 350,000 Buckfast honey bees on the third floor terrace. The bees have been working their magic this summer and their honey has now been harvested to be used as a core ingredient in the Honey JuBEElee Afternoon Tea.

The entrance of St Ermin’s is rather opulent, adorned with glittering chandeliers and an ornate faux-baroque lobby. Afternoon tea is served in the lounge on the first floor where you can sit watching the lobby or in the lounge area which hosts a few tables; when we were there in on a Saturday afternoon there were at least twelve people in our area.

Honey JuBEElee Afternoon Tea began with a glass of delicious Bianca Vigna Prosecco Frizzante, just to whet the appetite while mulling over which of the 13 teas to choose. These range from traditional English Breakfast to a selection of fruit teas.  We went for green tea and fusion oolong to start, with both flavoursome and easy to drink and later on we asked our lovely hostess, Ines, who suggested lapsang souchong and rooibos orange which were just as well received!  With the tea, they provide a little timer which is really handy to see how long you should brew the tea for!

Our food arrived soon after on a tiered serving plates, and it was truly a feast for the eyes. For the savoury options, we tucked into such delights as goat’s cheese sandwiches with apricot chutney, hot smoked salmon with creme fraiche and dill, and a Caesar Chicken sandwich.  My personal favourite was the red pepper with aubergine which was very different to any usual afternoon tea sandwich.  We were served Prosecco as we ate – it was lovely to see the glass filled up without having to ask.

The sweet treats comprised a gorgeous sloe gin baba with cinnamon cream, white chocolate mousse with honey sponge and honey caramel – this was served in a little flower pot and looked really cute!  The Banana and honey mousse with milk chocolate was beautifully crafted to look like a honey pot but was a tad sweet for our likings.

We were also served a bowl of warm mini scones accompanied by clotted cream and jam – the jam was homemade and divine. The scones were light, crumbly and tasty… but by this point we were both running out of room!

The service was exceptional, the tea was delicious and almost every morsel tasted as good as it looked. The St. Ermin’s’ Honey JuBEElee Afternoon Tea is served daily between 12pm and 6pm in the Tea Lounge, Library and Terrace.