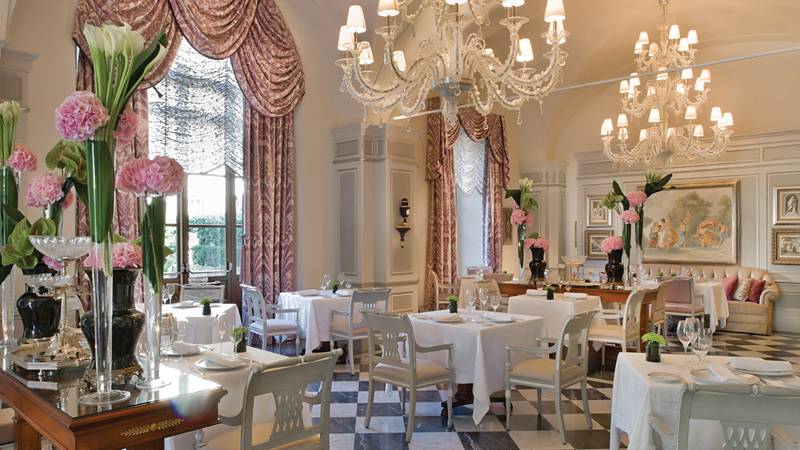 It was as though we were sitting in a winter wonderland, conjured by the nostalgic memories of a childhood Christmas. The dining room of Il Palagio restaurant at Four Season Hotel Firenze was festooned with silvered branches and shining baubles and each surface seemed to twinkle like frosted leaves on a bright, December morning. As anyone who has visited a Four Seasons hotel over the holiday season will know, the public areas are completely transformed for the festive period and Four Seasons Hotel Firenze was no exception. Even the staff at Il Palagio were sparkling, not to mention the glasses of franciacorta Ca’ del Bosco, with which we began our meal.

Nicola, who served us, was overseeing the precise movements of the other staff with a practised eye and, nce we had ordered, made sure that the two Michelin star food arrived at our table with friendly but unobtrusive grace. Similarly, our sommelier, Thomas, was always close on hand to answer our questions about his wine choices with the trademark Four Seasons joviality.

After dipping focaccia into freshly pressed, ludicrously intense, olive oil and enjoying a warming amuse-bouche of red mullet with winter vegetables, our starters arrived. Charlotte had ordered ‘Francesina’ stewed beef salad with lentils and pumpkin cream, the beef rich, shredded and tender, like osso buco, alongside velvety pumpkin. Obliged by her menu choice (and fortunately overjoyed) to immediately start drinking red wine, Charlotte remarked that her Amalfi Tenuta San Francesco Tramonti 2012 had a meady nose and tasted almost fortified, with Thomas explaining that the complexity and depth came from the winemaker’s use of pre-used oak barrels for the aging.

My crab timbale with cucumber carpaccio had that unique seafood sweetness, the substantial spoonful of Kaluga Amur caviar providing the perfect salty contrast. My wine, a chardonnay ‘Gresy’, Tenute Cisa Asinari dei Marchese di Gresy DOC 2000, from a unique grape from Langhe, was clean and well balanced, with melon in the nose and on the palate. Both plates had been scattered with herbs as with snowflakes and the delicacy of the presentation was impressive.

As is traditional in Italy – and who are we to back down from a traditional extra course –  we moved onto primi piatti, the first dish, usually pasta or risotto. I was happy to agree when the sommelier suggested I continue with my wine as it was to accompany another seafood dish, this time Executive Chef Vito Mollica’s signature dish of cavatelli pasta ’cacio e pepe’ with marinated red prawns and baby squid. The seafood was added raw at the last minute, to cook in the heat of the pasta, which gave off an incredible aroma when it was served. The pasta, as one would expect, was perfectly al dente and the sauce was richly cheesy but not cloying, becoming extravagantly buttery when I continued to drink the chardonnay between the heavenly mouthfuls. This is a pasta dish that will set a new and challenging standard for the pasta I will eat in the future!

Charlotte’s pasta dish was ricotta cheese and spontaneous herb ‘strigoli’ raviolini with truffled boar ragout. Although the plate seemed rather laden with the raviolini, she remarked that it seemed quite light, considering the powerful porcine flavours of the meat and the earthy scent of the truffles.

Moving on to the main course, I was a little unsure what to expect. This was due to the fact that my choice had already been shown to us, prior to cooking and, being ‘Montespertoli’ pigeon cooked in pork bladder with vin santo, had resembled rather a slightly uneven, pasty haggis as opposed to fine dining cuisine. The staff had also been absolutely firm with me about the fact that the pigeon would be served ‘very rare’ which fortunately, as I explained to them, is exactly how I like it. We were discussing how our next wine, a local Tuscan Chiostro di Venere IGT 2009, had redcurrant sharpness and elegance that would pair well with both our secondi choices, when the food arrived…

The pigeon had been removed from the bladder – of course – and the breasts and legs artfully draped around the plate alongside swirls of caramelised fruit and thyme. It was very rare, but this meant that the gamey taste of the pigeon had been sealed in by the cooking process and the perfumed, nectarous fruits were a beautiful accompaniment. Charlotte – who I am sure is on a secret mission to rid the world of deer – chose the venison loin with chestnut crème and pomegranate reduction. The silky-smooth chestnut purée and tarty pomegranate syrup were perfect winter flavours, but they were only a frame for the sizable slices of perfectly rare, juicy venison that were the real focus of the dish.

Although cheese is not a tradition in Italian fine dining, Charlotte and I rather insisted on sampling some and, with the usual Four Seasons eagerness to accommodate our every whim, we snuck an extra course in so that we could sample some Italian cheeses. Of the small selection that they whipped up for us, we were drawn to an old favourite, the strongly aromatic (stinky, but in a good way!), meaty taleggio, that wasn’t overpowered by the ripe red and forest fruits in the accompanying Brunello Pian dell’orini 2006.

After our pre-dessert of cleansing mango napoleon, sommelier Thomas had clearly noticed that we were enjoying the Italian wine pairings and departed the mainland to suggest a pair of Marsalas for the dessert course. To partner Charlotte’s fluffy coffee soufflé with Marsala ice cream, Thomas chose a ‘Marco de Bartoli’ 1986, with the following year’s vintage for my beautifully presented and light Amadei’ chocolate cremoso with ‘Amarelli’ liquorice meringue and ‘Sassolino’ liquor ice cream. Both wines were perfect choices, Charlotte’s wine being robust, with hints of coffee and orange, and mine being slightly darker but with a rich flavour of chocolate and nuts.

In typical Four Seasons fashion, we were then invited to partake in some of the specialities of the restaurant, in this case a cup of civet coffee, brewed through the most marvellous apparatus, and the mysterious ‘Tea on Fire’ which proved to be a rather strong cocktail which was lit and then its dramatic blue flame poured from cup to cup in front of our eyes. After this wonderful meal, we moved to the bar for a final espresso martini, as is our custom, but it was with some regret that we finally left this palace, Il Palagio, of which we both will have fond memories for a very long time.