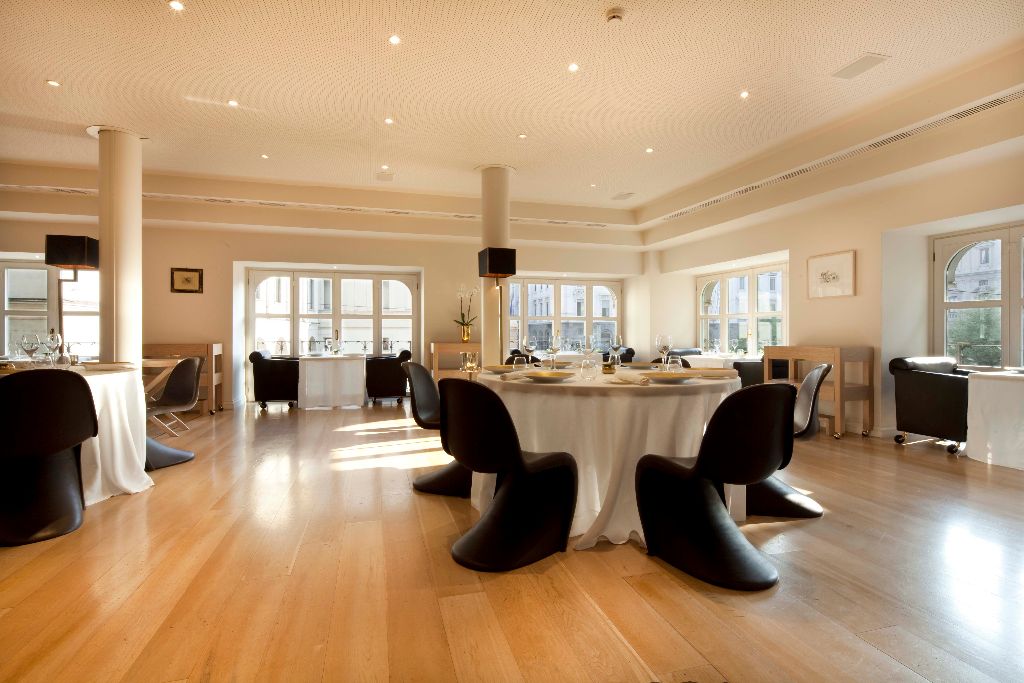 Milan is one of the few places in the world in which the combination of food and fashion seems completely effortless. This year, luxury fashion brand Trussardi, who have diversified into fragrance and art as well as fine dining, celebrated the first Michelin star awarded to Chef Luigi Taglienti’s restaurant above their flagship store in Milan’s famous Piazza della Scala. Although Chef Taglienti has only been with Trussardi since July 2012, his distinctive and creative dishes seem to embody the Trussardi brand’s desire for excellence and innovation.
In order to enter the restaurant, guests must enter the Trussardi shop and ascend in the lift to the first floor, where the white decor is accented by dark wooden grills and pictures of Trussardi’s ubiquitous greyhound logo. The greyhound was also recently turned into an animated film to celebrate its 40th anniversary – head over to the Fashion section on our Sound and Vision site to have a look! We were served by attentive Maitre D’, Simone, and knowledgeable Sommelier, Marco, whose cheerful approach made our specially created menu fun and interesting, especially since some of the courses were quite unusual!

We were fortunate enough to be given the best seats in the house, a table for two overlooking the piazza and with a view into the kitchen through large, ‘smart glass’ windows, which could be made translucent to hide the workings of the restaurant if the chef desired. We began the meal with a glass of specially created Cuvée Prestige Trussardi S.A. Ca’ del Bosco from Lombardy, which had lethargic fizz and a nice honey sweetness that contrasted the cornflour and fried rice crisps that were served while we discussed the wine menu.

Our first course, I must confess, immediately caused me to think that the restaurant had perhaps prioritised style over substance. Described on the menu as ‘water, olive oil, lemon and liquorice’, the liquid served proved to be just that: water, with shavings of frozen olive oil, a squeeze of lemon and a couple of grains of ground liquorice. The bowl, higher on the left and right, had to be turned 90 degrees to allow a spoon to be inserted. Despite my doubts, I found the olive oil formed a pleasantly smooth coating in the mouth as it melted and the sharp flavours of citrus and liquorice cleansed the palate – exactly as one would wish prior to starting a culinary adventure such as this.

There followed some more adventurous cuisine, a mysteriously named ‘white and black of squid’ with dramatically monochrome discs of cuttlefish and a single fried spaghetti on sea urchin cream, and ‘oyster, diaphragm and rose sorbet’, composed of a sweet granita with a raw oyster and some cubes of veal diaphragm that turned the ice red with blood. This is not a restaurant for fussy eaters, but, once the initial question of identification had been overcome, the dishes were very tasty. To accompany these courses, Marco chose Michel Redde’s Pouilly-Fumé Petit Fumé 2012, which was floral on the nose with meadow and mineral notes on the palate, a perfect light wine for the fish.

We moved on to eel with a veal sauce and moscato zabaione. The juicy eel and sweet zabaione foam combined to create a real showstopper of a dish, with a sprinkling of coffee that was really brought into relief by the yellowy Heymann-Lowenstein Reisling Schieferterrassen 2011 that accompanied. These twists on Italian classics kept us guessing and the next course, pepper in bagna cauda, was no expection, having the appearance of a plate of food that had already been rather carelessly consumed. Tangy pepper sauce was swirled with a refined version of a traditional dip (the garlic in this bagna cauda, Simone informed us, was boiled in fresh water seven times to enhance the natural sweetness) and garnished with two slivers of dried anchovy. Although eating dip from a plate might have proven a challenge, we were encouraged to mop it up with the most delicious bread I have ever tasted; somewhere between a croissant and a brioche, the butter and orange rolls were moist and perfectly divine!

No trip to Milan would be complete without risotto and we were presented with a substantial helping of this, flavoured with bergamot and rue, and topped with succulent whelks. The rice still had a decent bite to it and the seaside saltiness of the whelks carried through into the clean and very minerally wine pairing, a Malvasia di Candia Callas 2010, Monte delle Vigne. I should add that this is a restaurant for lovers of salty food. For me, the balance was perfect, but a more sensitive palate might find it a bit much!

Arriving at the secondi, the Italian equivalent of our main course, we were keen to taste something a bit less fishy… Fortunately, Chef Taglienti had something similar in mind and we were soon hopefully watching Marco pour our first red wine, a Sicilian Etna Rosso 2012, Tenuta delle Terre Nere. He explained there was a high minerality in this wine, due to the volcanic region in which these small grapes were sourced. The overall flavour was reminiscent of cranberry and other red fruits, with a dry finish. It was, additionally, a great pairing for our rabbit in a Ligurian style, an interpretation of a dish the home region of the chef. The meat was herby, rich and perfectly tender, with a pleasant bitterness to the sauce.

Chef Taglienti came out of the kitchen on several occasions to speak to us – through Simone, sadly Lady C and I do not count Italian among our spoken languages – and watched with interest as we approached our ‘artichokes and Cynar’, a strangely savoury course using the Italian bitter-sweet herb liqueur. By this point in the meal, we were happily replete and, finishing our specially created menu with a fluffy clementine and green olive soufflé with white chocolate ice cream, we were somewhat relieved to have the finishing post in sight.

After the undeniable perfection that is Italian espresso, and petit fours, we were walked back to the lift by Simone, Marco and Chef Taglienti, each of whom took our hands with charming formality before the doors closed. If you are in Milan and are curious to see how style and substance can exist in harmony, visit Il Ristorante Trussardi alla Scala, a restaurant that managed to achieve a Michelin star with the speed of a greyhound.