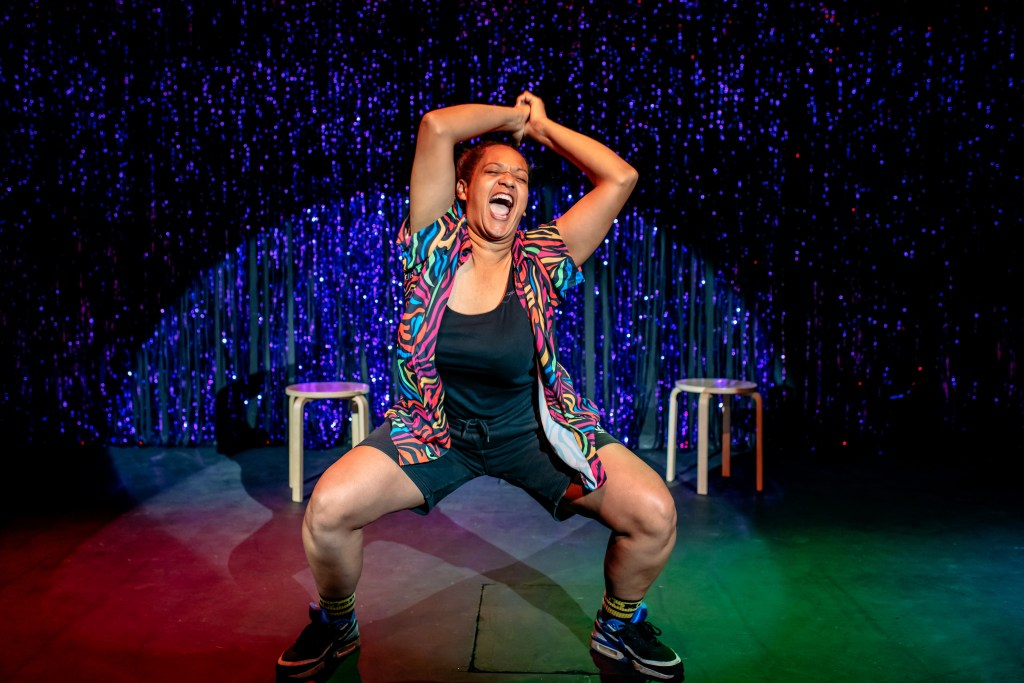 Dumbledore Is So Gay is a nostalgic hug to coming of age, coming out, and growing up with Harry Potter, we got to speak to one of the stars of the show actress Charlotte Dowding about the piece and her inspiration from Michaela Coel.

My stepmum runs an acting school in Nottingham (now The Attic Theatre School) and I actually got into acting by watching some of her classes when I was younger and then asking my mum if I could do something like that! I started doing Saturday classes. I wouldn’t say there was a specific performance that resonated with me but I just loved the way theatre made you think/feel during and after watching, I wanted to make people do that.

My favourite role has been MC 3/Shanice in a show called Splintered by Emily Aboud, because I think it was such an important show about queer women in the Caribbean and I was lucky to be involved with it from the start, devising and creating and learning so much. It’s an incredible show and also involved dancing which I absolutely love!

Can you tell us about your current project: Dumbledore Is So Gay?

Dumbledore Is So Gay is a coming out and coming of age story. It deals with some dark/sad themes but mixed with a great amount of humour and of course Harry Potter references! It’s about navigating the feelings of realising you are attracted to the same sex and the reactions of those around you. I think it is a show that is needed right now, it’s so relatable and I can’t wait to share it!

What can you tell us about your character(s), what drew you to the role?

I play one of Jack’s best friends and his mum. They are two pivotal people in a lot of people’s lives and it’s great to discover their journeys. Playing Gemma (the best friend) is wonderful because the play also lets you see her struggles and I think it’s relatable to a lot of women. I think the role of the parents is so interesting because I don’t think we often think about how parents have to navigate these situations. I know for me, I spent such a long time accepting myself for who I was and then when I was ready to come out didn’t even consider that my parents might also need time to process even though I know they love and accept me – which I know I’m very lucky to have.

How does it feel to be reprising your role and reuniting with the cast from the VAULT Festival?

It feels amazing! I can’t wait for more people to be able to see this show. Alex and Max are just incredible! They are both such lovely humans and have such a warm energy. They are brilliant to work with, always have so much to offer and we have a lot of fun in the rehearsal space! I think everyone will just completely warm to Alex (Jack) straight away, and can’t wait for them to follow him on his journey!

I think there are a few to be had but the biggest one for me is that nothing is perfect, there’s no perfect way to do anything, but having the right support around you is so important – and that doesn’t necessarily have to mean family.

My favourite place so far has been in a big tent in the middle of Derby performing The Wind in the Willows with Derby Theatre. It was the first show I got to do after lockdown and it just felt incredible to perform again; I was working with the loveliest cast, and an awesome creative/tech team and doing a kids show – it was so much fun!

Definitely audience reactions and responses. When people feel a certain emotion or spark up a conversation because of the show you’ve performed it just feels absolutely incredible and I think it’s such an important thing for theatre to do.

It might be a ‘you had to be there moment’ but there was a time where a fellow cast member tripped over their words in a sentence so much so it ended up not being actual words, and made absolutely no sense, could not get away with it! There was a slight pause where we all looked at each other as we tried not to burst out in laughter!

I’ve got to start with Michaela Coel. From watching her perform Chewing Gum Dreams at the National to seeing the work she’s producing now I think it’s just blooming fantastic and exciting and needed and I can’t wait to see what she does next! I want to create work like she does. Then I also can’t forget about Viola Davis and Kerry Washington and so many more, but watching these incredible women of colour absolutely killing it is so so inspiring to me. I also have so many friends making amazing work – Rujenne Green and Natasha Brown to name a couple, they excite and inspire me with the work they’ve created and are definitely people to watch!

I would love to play Queen Margaret in Shakespeare’s King Henry VI trilogy. I love this character! A woman who leads an army! I think she’s one of the strongest women characters that Shakespeare has written. I’m determined to make this happen one day!

Our culture editor @bespokenbeyond caught up with