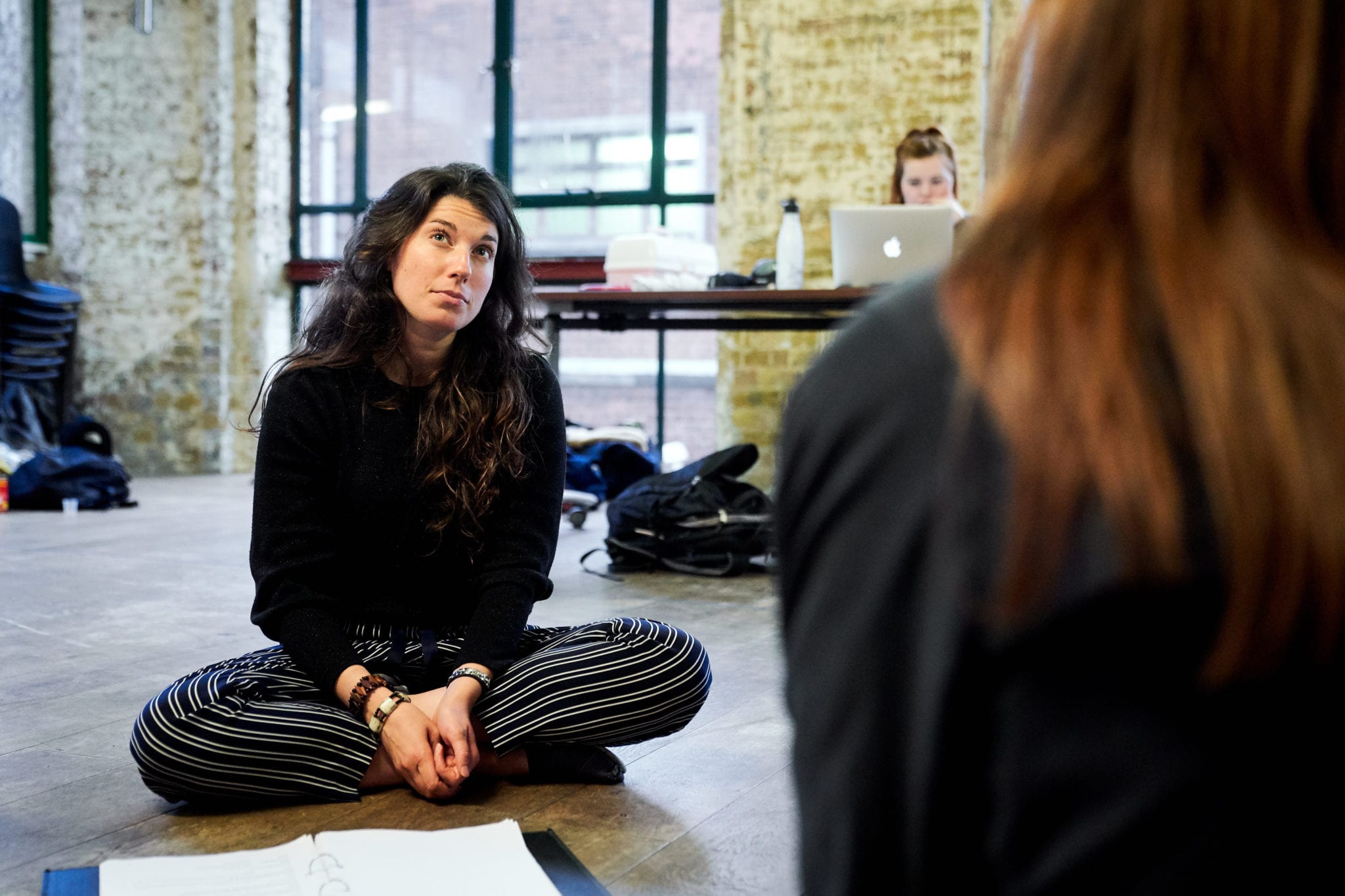 Fay Lomas is a director working in theatre, audio and film. She has a particular interest in new writing, reimagined classics and international work. Currently directing the play: The Girl Who Was Very Good At Lying, we got to speak to Fay about the show and lots of other things like how she became a director and what theatre excites her.

Please tell us about your current project The Girl Who Was Very Good At Lying?

The Girl Who Was Very Good At Lying is a one-woman show, written by Eoin McAndrew and starring Rachael Rooney, about Catriona, a young woman who lives in a tiny town in Northern Ireland and is very, very, very good at lying. She has an extraordinary imagination and capacity to invent wonderful stories – and make everyone, including herself at times – believe the impossible. The play centres around the day when she meets an American tourist in the pub she works at, and decides to give him a tour of her town’s main historical sites – despite there not being many historical sites and despite Catriona not actually knowing much history…. Which is where her lying superpower comes into play. Her stories form a quirky, funny, outrageous, and constantly surprising alternate history – but it’s also a play about loneliness, about trying to transcend who we are or where we are through imagining our way out – and the joys and dangers of that. We had a short run at the Jermyn Street Theatre for four nights in the summer, where we were nominated for an Offie OffFest Award; it’s been so nice to return to the play now, after some time away from it, and bring it back to life.

What would you say to anyone thinking of booking to watch The Girl Who Was Very Good At Lying what can they expect in this one woman piece?

Catriona is constantly surprising, so hopefully they’ll be in for quite a ride. She’s a very spontaneous character, led by her imagination and her heart, and we go on that journey with her. You never quite know what she’s going to do next – so that makes the play a bit of an adventure. This is also a play that really celebrates liveness – where Catriona really engages with the audience and needs us there to tell her story. So, after this time when we’ve been consuming so much art digitally, this is a really exciting story to experience in person…

Do you have a particular favourite line in the piece?

Many! I’ve found that her lines keep popping into my head at unexpected moments. There’s one line that really sticks though – Catriona says, ‘I’ve always been a good liar. I’ve been doing it regularly since school, because if you have a skill you have to hone it, or else you’re spitting in the face of God’s bounty’. I love it because it encapsulates her utterly original take on the world, her irreverence, and her combination of deadpan and playfulness towards us as an audience.

How did you become a director?

I remember being really wowed by liveness and spectacle at the local pantomime, from when I was really quite small, and being about 4 or 5 and feeling desperate to be asked up onto the stage at the end to meet the actors! And I think on some level that experience of wonder in watching the panto translated into a desire as a child to be involved in it all somehow! When I was a bit older, I joined my local youth theatre, and what I lacked in talent as an actor (a lot….) I made up for in enthusiasm. Directing at that point never occurred to me though – I just knew I loved stages.Then when I was starting to think about careers, I knew that I wanted to work with new writing, and had thought as a young adult that perhaps that I’d like to work in publishing or in a literary agency. I loved the idea of working on stories, and collaborating with writers, and being part of bringing new work into the world for the first time – all of which I’m lucky also to do now as a director. Then by chance a friend at university asked me to have a look at a play his friend had written to give thoughts on the script – and I ended up, spontaneously, also agreeing to co-direct it with him. And from the first rehearsal, I found out that I just loved directing – and I haven’t really stopped since. After university, I started my theatre company, and things really grew from there.

What has been your favourite production to direct?

I really couldn’t pick. I’ve been lucky to work with lots of brilliant people and across productions which are really different from each other – from new writing to classics, to new translations and adaptations. Each one has been exciting in its own way. This last eighteen months has also led to my making work in other forms. I’ve directed several audio pieces – including co-creating the immersive audio drama series Land Skeins – and have just finished my first short film, as well as currently directing a digital project. I’ve loved being able to explore these other forms too.

What production changed your life?

I watched Melly Still’s production of Coram Boy at the National when I was 15, as it was a production, I was studying for GCSE Drama. It absolutely blew my mind in terms of what theatre could do. I still have such strong mental pictures of that production – and think back to it often. I was really lucky then to assist Melly on a production of Captain Corelli’s Mandolin back in 2019, and that was hugely exciting – to be able to work with her, over a decade after I’d first been so inspired by her work. Another show that really moved and shaped me was Tinuke Craig’s production of Last Easter at the Orange Tree. It was actually the first production I saw inside a theatre again after the third lockdown ended. I hadn’t been in a theatre as an audience member in 18 months and I cannot imagine a more beautiful show to come back to theatre with. It was stunning and deeply moving – such a celebration of theatre itself and liveness and togetherness.

I want to watch and to make theatre that breeds empathy, that asks the audience to inhabit someone else’s world for an hour or two. I’m excited by theatre which feels like it has to exist as theatre, rather than as any other art form – that thrives off being told live, to an audience, each night. I love theatre that asks the audience to believe the story it’s telling on an emotional level, whilst celebrating the fact that it’s telling it in a non-literal way. I think that’s something that theatre can do so beautifully – it inhabits a space that can simultaneously feel very real and highly expressionistic.

What advice would you give to aspiring talent in the industry?

I think reaching out to creatives in other roles, who are at a similar stage of career to you, is one of the most important and rewarding things you can do. Theatre is such a collaborative art form – finding teams of people you want to work with, whose work you are excited by, is part of the joy of it. Going to scratch nights / new writing nights can be a brilliant way to meet writers. Or if you see a production, look up who has done the lighting, who’s done the sound etc. And if you loved it, see if they’re up for a coffee. One of the things that I’ve felt incredibly fortunate in is in the collaborations I’ve had with other members on the creative team – some of whom I’ve now worked with repeatedly, over the course of six years. So many of my projects in the last year, when the structures of theatre really fell away for a time, started from chats with other freelance creatives. I’d also advise aspiring talent to reach out, not only to their peers, but also to people a bit more experienced, if they love their work – often people will be up for having a coffee or a Zoom. I’ve been so lucky to have people share their time and advice with me and that’s really shaped my career.

As well as the directors whose work I’ve already mentioned, Rebecca Frecknall and Helen Tennison. Rebecca Frecknall’s work is so purely theatrical, so beautifully expressionistic and simultaneously grounded in the most extraordinary performances. I’ve been lucky to assist Helen on three occasions and her aesthetic, use of sound and movement, and way of working with actors are a constant source of inspiration. I’m constantly inspired too by the creative teams I work with, and the writers and the actors – by their talent, energy, creativity and resourcefulness. Being able to work with brilliant people on creative projects is one of the very best things about directing, and so much of what I’ve learnt about directing itself has come from conversations with creative team members, writers or actors.

I’m (pretty infrequently) on Twitter at @FayLomas1. Purchase tickets for The Girl Who Was Very Good At Lying online.