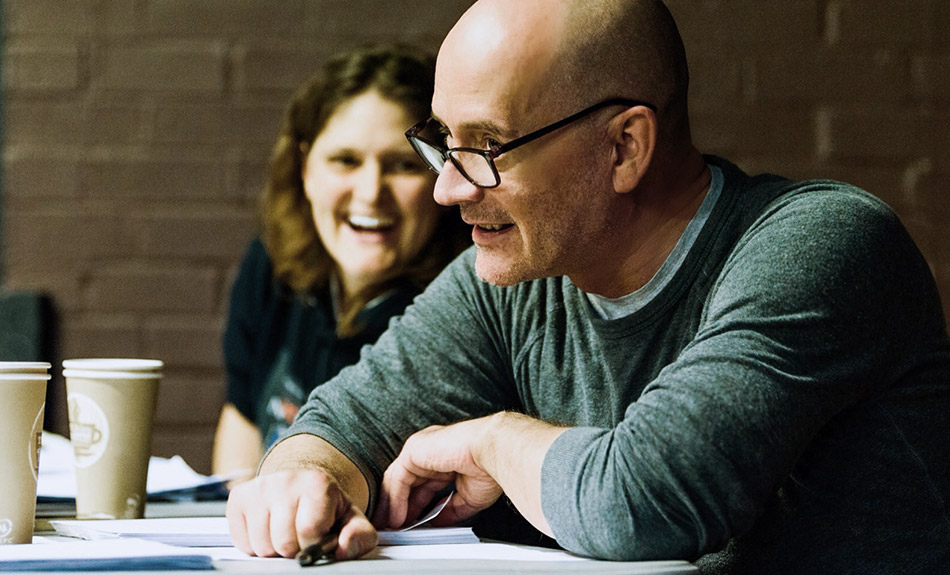 Michael Strassen has directed some of the very best musical theatre shows of recent years, notably revivals of Sondheim – Company and Pacific Overtures.  His current project is directing a new play The Funny Girls, we got to speak to the director about the show and working with Musical greats like Ruthie Henshall and a love for Hong Kong.

How did you get into Directing, was there a particular performance you saw that resonated with you?

I was asked to direct Ruthie Henshall at The Royal Festival Hall which was a wonderful experience. Having cut my teeth on scale and orchestra I then did a very dark play called The Pitchfork Disney at The Mill Studio in Guildford, so I felt both edges of directing. It really all came together when Lizz Brain, a theatre critic, put me onto directing and staging Sondheim’s Company at The Edinburgh Festival at C Venues. We got a five star review in The Scotsman, so I thought let’s keep going.

You have also dabbled in acting would there be any show that would tempt you back on stage?

That’s a difficult one as I miss using my voice, but I am really committed to this side of the fence now. I see my time on stage as a window to understanding actors.

Can you tell us about your current show: The Funny Girls what drew you to direct the piece?  Is it true it is based on a “tale” by Joan Rivers?

Well, I laughed out loud when I read the script, but the main reason is my adoration of the two supreme talents and the joy and respect in which the play celebrates their roots and travels. I believe it is true they both did some off Broadway play together well before they found their groove, but Joan Rivers milked it because it was funny.

Is there a message you would like the audience to take away from The Funny Girls?

Stuff won’t make you happy. When you see the humility and joy in the late Rivers documentaries especially around her grandchildren, and Streisand talk about her son, I see two people who attained so much but learned life’s most powerful lessons. Act 1 is all about ‘getting somewhere’ to fix a problem. Act 2 they are both somewhere wondering what’s the next step. There is a healthy respect between these two in the play and hilarious banter. My main message would be laughter. It has got me through a lot, that, and friends who you can say anything to.

Where has been your favourite place to direct a show and why?

There is an amazing theatre in Hong Kong where I directed Pippin. It has three large theatre spaces and I got to choose the one to suit the piece. To quote Sondheim it was ‘extravagantly over staffed’, and I was spoiled rotten with the set, lighting, and orchestra. The whole Zen heart of the piece really worked there’s culturally as they are half way there to the shows message. Oh, and the food was cheap and healthy and I love it.

How different is it to direct a concert or cabaret as opposed to a more structured play or musical?

This is all about the relationship to the audience and the fourth wall. In a play both audience and actor pretend we are not aware on one another, many musicals are the same but skirt the fourth wall which takes real skill. Cabaret we are all there in the same room which again takes skill as the artist must create a persona to be on stage which won’t destroy their sense of self. This is what Rivers and Streisand mastered, you know it is them but don’t expect them to be that way at home. Theatre is like therapy for the audience, and they pay actors to take risks pouring laughter and death through them so as a collective we learn. It’s just a posh version of, ‘it was a dark and stormy night’ around a fire three thousand years ago.

Simply working or being asked.

What would be your dream show to direct?

In this moment in time after the year we have had I would like to slit Passion by Stephen Sondheim wide open and expose the power of true love, eternal love and how as a force it affects all it touches. It is sublime.

Are there any performers you’d particularly love to work with?

Ruthie Henshall again as she is in an exciting new stage of her career. Lucy Williamson, I cannot wait to work with again, she is currently smashing it on stage in Australia. I have a few newbies on my radar too- I am all for the underdog being a working-class lad (only 11 per cent of directors come from my social background) so I am always looking for actors who have clawed hard to get to drama school or have what I consider true talent in this digital age.

What advice would you give to people who would like to get into directing?

Well passion must be there for the art itself, but it should keep you awake at night, the pictures and feelings within a piece – I dreamt most of my blocking for Company and woke and wrote it down. I guess you need some obsessive element and to live inside the material, like any artist. Also, I am an avid documentary and history fan, and information is cool, but actors can’t act concepts so leave the clever clogs at the door. I can’t paint but I do with humans and lighting and the words of other people as I can’t write. To know your place in the equation and to collaborate but know your vision or it will dilute. Theatre should be dangerous in every sense. The shadow. Find a new producer whose integrity you believe in and create, even if it is one coming out of ‘school’ or established.

Check for information regarding Michael’s latest play and where to see the show online.