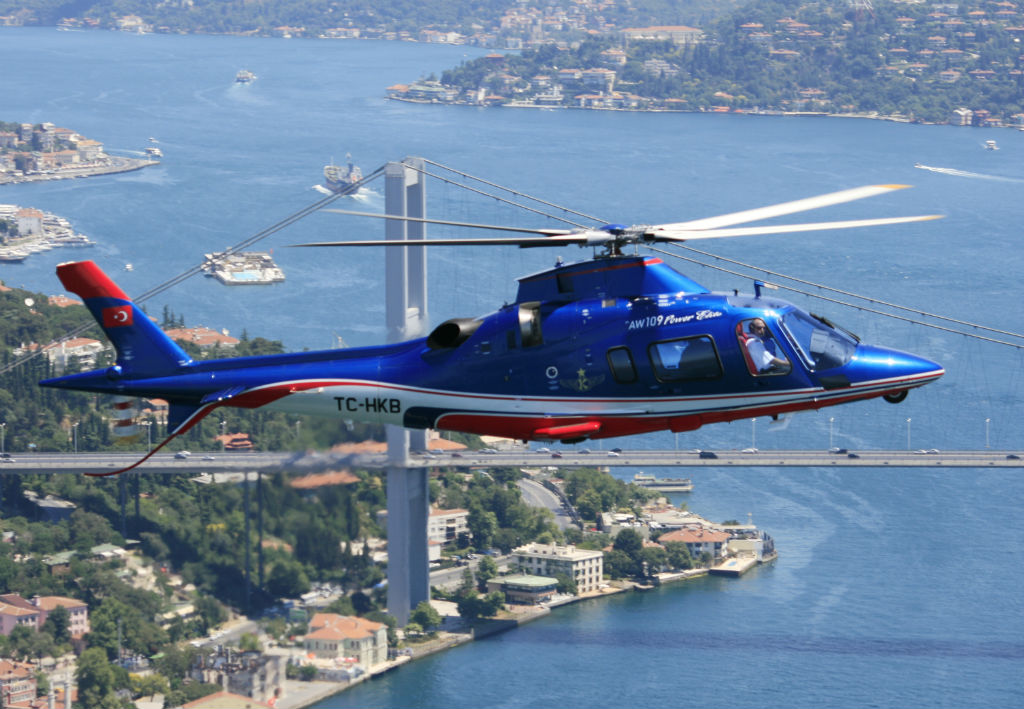 The last time I was in a helicopter was over the Mendenhall Glacier in Alaska; filming a vast expanse of untouched landscape out of the open chopper doors.  I mused on the stark contrast between that flight mission and today’s as I rode my motorbike through the beginnings of Istanbul’s vast industrial outskirts towards the helipad: from Alaskan wilderness to an aerial tour of a city that has been relentlessly developing for over 3500 years; an urban landscape that is now home to the second largest metropolitan population in the world.

The cement works and builders’ merchants that one passes on the approach to Istanbul Helicopter Tours led me to imagine some dingy hut on the edge of a patch of crusty hardcore; but how wrong I was proved!  A vast and modern hangar looms over an expanse of black tarmac, perfectly marked out with what seemed space for a dozen helicopters.  The Pocket Venus and I were ushered into the compound by a friendly security guard, then greeted warmly and offered seats in the slick reception area, where we were served chay and perused a variety of high-end travel magazines as we awaited our ride.

We were not the only fliers there.  A few couples and a young family were all waiting; a mixture of Turks and foreign visitors; and there was sense of quiet excitement and anticipation in the room.  Before long we heard the throbbing of approaching chopper blades, and we dashed to the window to observe the approach of a stunning helicopter: a highly-polished black Agusta A119 Koala so slick that I half-expected James Bond and the Milk Tray man to clamber out hand-in-hand.

Emre, the affable proprietor of Istanbul Helicopter Tours, led us out and introduced us to the pilot and co-pilot, and we were swiftly aboard, strapped in and togged up in two-way comms.  The helicopter was configured with six seats at back – three facing three – and we were comfortably placed on the starboard side facing one another, with one other couple beside the port windows.

At this juncture, I felt the Pocket Venus start to tense a little.  In my eager anticipation of the trip I had overlooked the prospect that her fear of aeroplane flight might possibly extend to other forms of aerial transport, and so offered what sympathy I could through my almost bursting excitement.  I was buzzing with glee as the rotors span faster and faster and we left the ground to discover Istanbul by air.  And in moments I sensed that she relaxed, now utterly swept up in my excitement and her own as the helicopter took off.

There is no substitute for the elegance of a helicopter’s movements; rising vertically and then gracefully dipping into forward motion, cutting a clean path through the air.  Any concerns that I may have had about the views from a closed-door chopper where quickly allayed as I looked down at the fast-retreating ground through the cleverly designed – and spotlessly clean – windows, that afforded magnificent and unobstructed panoramic views.

The first time I rode in the basket of a hot air balloon was over Arches National Park in Utah.  I and a colleague were accompanied by the balloonist and a young Mormon couple from Salt Lake City.  No sooner had we reached a cruising altitude (if indeed there is any other sort for a hot air balloon) than the young gent produced a ring box from his jacket pocket and proposed marriage.  None of us having anywhere to hide our embarrassment in the event of a refusal, it was to the relief of all three of the astonished onlookers (and no doubt that of the prospective groom) that the young lady tearfully accepted this proposal.

Was I therefore greatly surprised when the Pocket Venus tugged at my sleeve and pointed at our fellow fliers on the port side of the helicopter, as he proffered a glistening diamond in her direction and implicitly (sweet nothings being hard to impart over the din of the rotor blades above) asked for her hand?  I confess I was not, being (as I have explained) a veteran now of multiple airborne betrothals.  Once again tears were wiped away, handshakes exchanged and grins all round from and for the happy couple.  And what a place to get engaged!

Having duly reported the felicitous tidings to the cockpit, we sped across to the Bosphorus Bridge – one of the great architectural icons of modern-day Istanbul.  It felt like we were in the opening sequence of a blockbuster film as we swooped overhead, our own shadow seeming to race us along the ground.  We continued down the Bosphorus strait, observing the many vessels large and small that populate this vital shipping lane.  The strait divides Europe and Asia, and on either side the astonishing vastness of Istanbul was spread out beneath us like a higgledy-piggledy three-dimensional jigsaw.

The magnificent scale of the Dolmabahçe Palace was revealed to me for the first time as I gazed upon it from above; before the hillside streets of my own neighbourhood in Beyoğlu appeared, once more from a hitherto unimagined perspective.

The crowning glories of Istanbul are to be found in Sultanahmet, and I was agog as the chopper looped around Sultanahmet Square, affording us simply breathtaking views of Hagia Sophia and the Blue Mosque: two of the greatest edifices ever constructed by human hand, and yet I was if anything even more overawed when greeted by the sublime splendour of the Süleymaniye Mosque.  It sits proud atop a hill in the Fatih district, its handsome domes and minarets visible from far and wide; but viewed from above has an elegance and geometric beauty that I could not even have imagined.

And ever onwards we went, swooping up the Golden Horn then back over the Galata Tower and Taksim Square.  Tempted though I am to wheel out the cliché of people like ants on the ground below, the most intriguing thing about our altitude was that the people were in fact rather bigger than that; and one had a genuine sense of spying on the intricacies and intimacies of daily life from the privileged crow’s nest of this noisy little glass bubble in the sky.

Throughout the flight, the pilot and co-pilot kept us informed through our ear defenders of the sights and areas over and beside which we passed, with a bilingual commentary that was quite sufficient to ensure that we missed nothing, but never so much as to be in any way intrusive on this special experience.

We continued back towards the helipad over the districts of Levent and Maslak, where high-rise hotels and office blocks tell the story of an Istanbul that is now the business and financial capital of one of the world’s most important emerging economies.  With the great suspension bridges far over to the starboard side, I was tempted to beg the pilot for another loop of the city, but retained my composure and accepted that that would be for another day.  I felt genuine sadness as I saw the helipad come into view and felt the chopper descend; but as I stepped out onto the tarmac into the buffeting wind of the rotors overhead I was once again grinning with the sheer elation of the whole experience: three and a half millennia of history, architecture and culture surveyed from above in twenty minutes of pure delight and exhilaration with Istanbul Helicopter Tours.