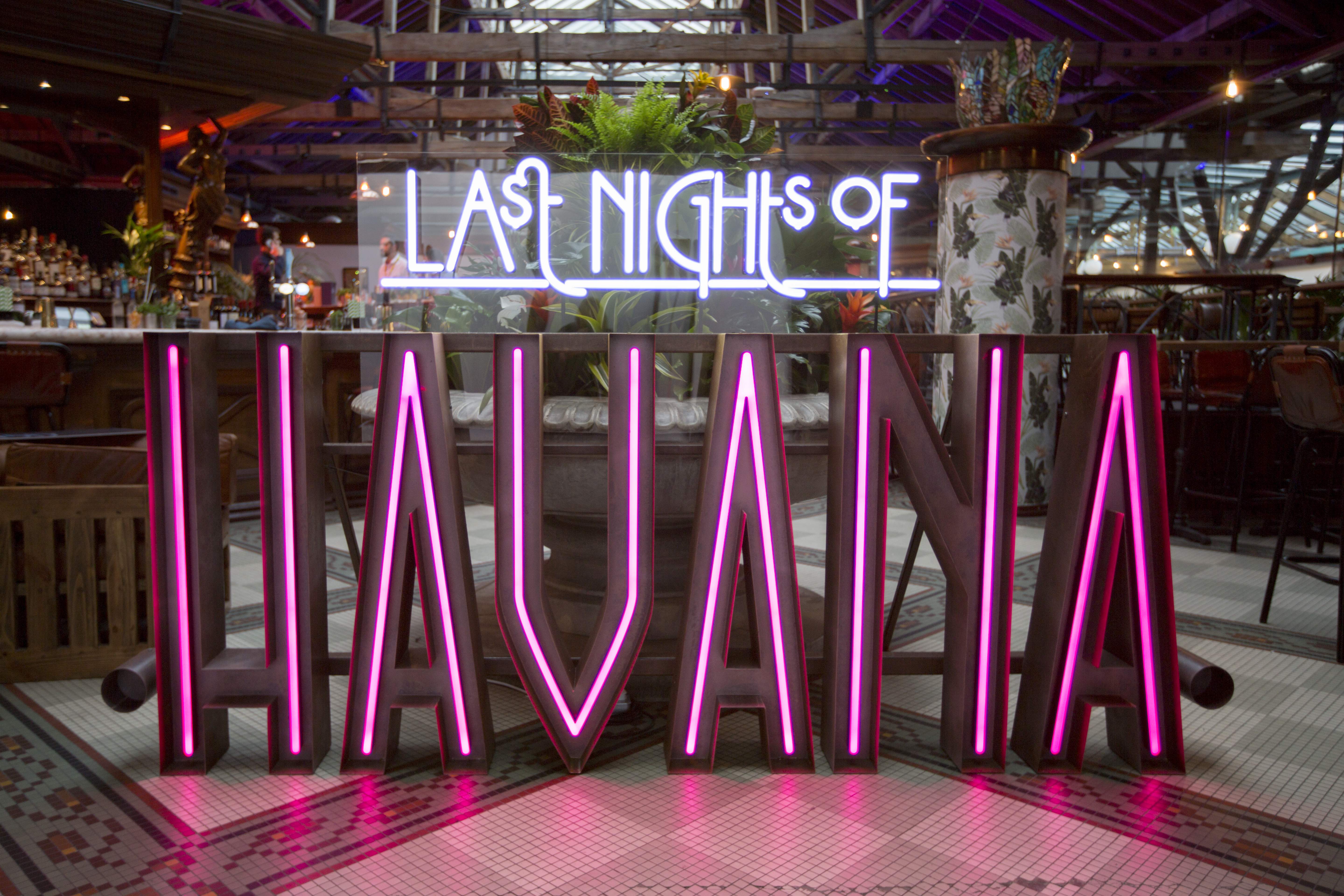 “Here was a place where anything might happen… Here I might leave my bones” Winston Churchill said on Cuba in 1951. Setting the scene and mood of the pop-up, the first part of this quote is written in neon above the curved island bar that’s the centrepiece of the huge space. It’s a fantastic party room that was once a rum and tobacco warehouse in East London’s Quayside bar at Tobacco Dock. The lofty ceiling is lit up with beams of lights in green, blue, red and white, the colours of the Cuban flag (which in turn is inspired by the national bird of Cuba, the Tocororo). Figureheads of naked women adorn the top of the bar, whilst mixologists in flower-patterned shirts and straw fedoras whip up the house cocktails down at eye-level. All this makes the ambience great. The only shame is that the wonderful four-piece band is lost in the corner behind the bar. I enjoyed the evening sitting down where some easy entertainment gazing at the characterful band would have gone well with my sipping Mojitos, and I’m sure I could sense a couple of more jazzed revellers ready to dance.

Cuban-born Oreste `Sambroso’ Noda, the man behind London’s Sambroso Sambroso, leads the band at Last Nights of Havana each night. The music draws inspiration from Cuba’s famous sounds, and combines them with a contemporary London soundtrack. The live band will pay homage to the soulful syncopation of the Buena Vista Social Club and as the night heats up the tempo gets faster and DJs come on to play their Latin-inflected beats.

The Last Nights of Havana cocktail menu has been designed by the team behind the Shoreditch bar, The Cocktail Trading Company. The drinks list features Cuban classics such as the Mojito, Cuba Libre and Pina Colada, as well as some exciting fresh concoctions unknown to me. Papa Doble was a favourite; Bacardi carta Blanca Rum shaken with fresh grapefruit and lime juice with a dash of Maraschino – supposedly enjoyed endlessly by Ernest Hemingway during his best days there. Much of the cocktail list is Bacardi based. Perhaps not the rum of choice, one thinks at first… But so theatrically made are the drinks and with the sugar and other flavours of Cuba added, it works a charm. The bar features a whole range of rum bottles and brands as well, if you do feel like creating your own…

Cuba isn’t exactly a country known for its food. Cut off from imports for so long due to the revolution and poor, the food is basic, the recipes are simple and focused around being filling. The Last Nights of Havana played this well, serving grilled sandwiches filled with ham, roasted pork and pickles, as well as fried plantain. I have to say, it’s kind of what you need when drinking strong cocktails. It’s the atmosphere that dominates and the bar food doesn’t need to distract.

This pop-up has well captured the key elements of Cuba during its heyday. It’s relaxed but opulent, it’s sexy and fun. Do as the Cubans do and ask the bar for a set of Dominoes to play Double-Nine with, the national game of local Cubans, whilst making your way through the cocktail list. I’d recommend this evening for anything from date night to an easy friend-group hangout, a cool night with a parent or even for a work outing. Tickets for Last Nights Of Havana are priced at £9 each and are available here. Ticket includes a membership card for repeated free access for the duration of the pop up. Groups of 5 or more are also eligible for a discounted ticket price and can email [email protected] to arrange this. Also if you haven’t got a New Year’s Eve plan yet, Last Nights Of Havana will host a special NYE party priced at £60, including a glass of Moët & Chandon and other treats.

Fenchurch Terrace at the Sky Garden