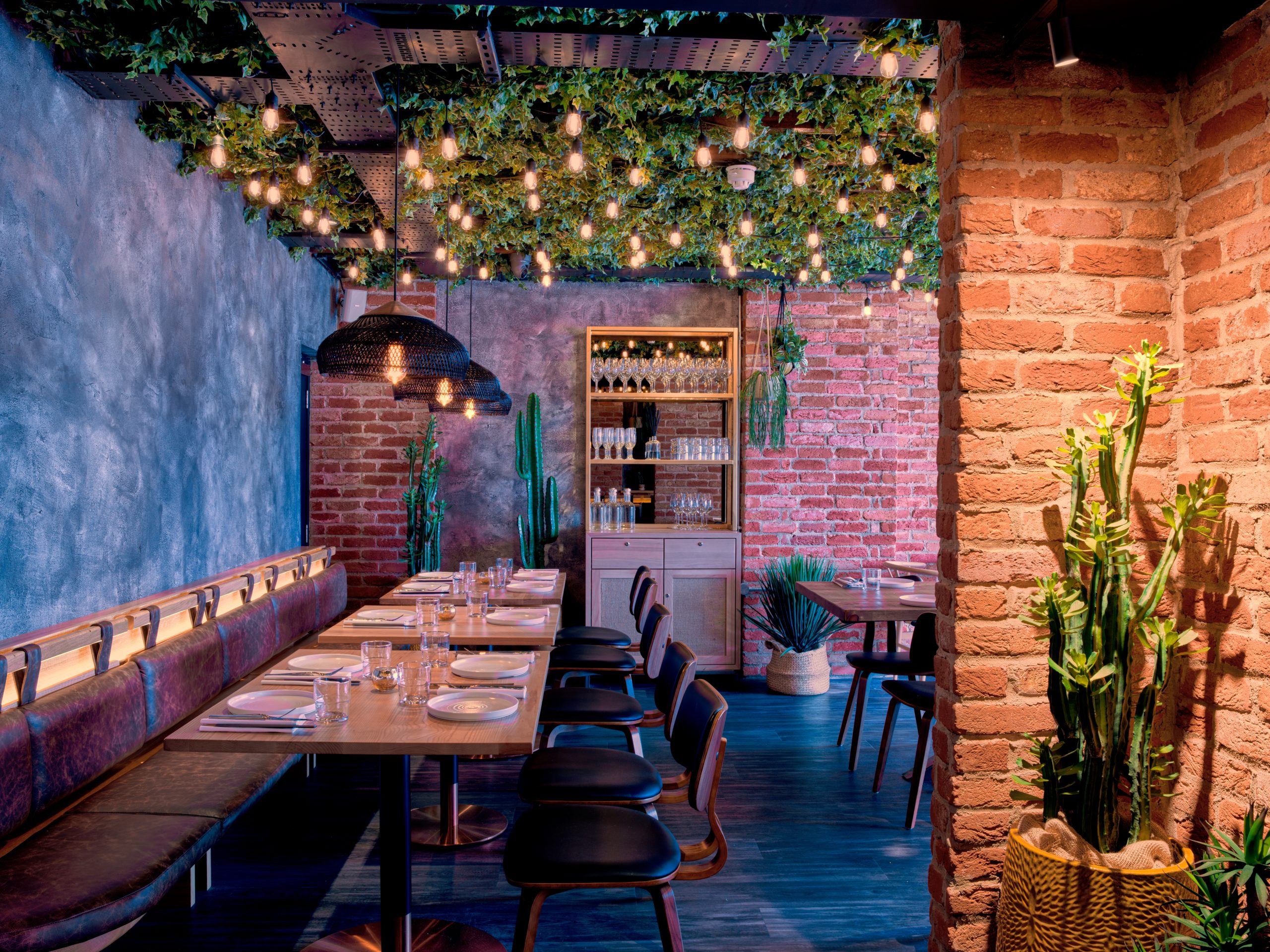 Notting Hill newcomer Los Mochis promises – or possibly threatens – to bring Mexico and Japan together. It is, they proudly claim, the ultimate pan-Pacific pairing of elegance, art, design, coolness, flavours and cooking techniques, and offers “elevated street food with neighbourhood heart and soul.”

It’s a bold claim and the first four make it sound like you’ll be hitting a club rather than the very pleasant, relaxed, bright airy restaurant space you’ll actually find. The other claims, however, are much closer to the truth, particularly the “neighbourhood” element: on a wet Tuesday evening, there’s not a seat to be had after 7pm, with what appears to be a very local crowd. From the restaurant’s perspective, that may not always be such a good thing, but more about that shortly.

The menu, as the promised fusion suggests, skips around the expected big ticket Japanese and Mexican dishes – guacamole in four variations, tacos, tostadas, sashimi, maki rolls – with the occasional diversion further south – ceviche, tiradito – and at least one utterly random lurch elsewhere with falafel. No. Really. Mind you, it’s a damned good Mexican- AND Japanese-influenced falafel.

Drinks also negotiate both sides of the Pacific, across a small but neatly formed menu and reasonable wine list. A Los Mochis Tommy’s Margarita kicks the night off and I mean kicks. Apparently they’ve been known to sell 300 of these on a busy night and, frankly, I’m not surprised. You know that thing where people rave about a cocktail because “you can’t taste the alcohol!”? I hate that. I like booze. I mean, I really like booze. Why the hell would I want a cocktail that tastes like a juice box? Anyway, they won’t be saying that about Tommy’s Margarita because the Tommy’s Margarita tastes of tequila. A LOT of tequila. A LOT of GOOD tequila. There’s masses of lime sharpness, the spiced rim brings heat and umami to the show… It’s a good drink, a masterclass in how good a simple drink can be. It’s a drink for grown-ups. After that, Ocho Reales beers from Mexico kept the early courses ticking, and then a couple of glasses of wine – both excellent recommendations from the manager – finished things off in well-matched style.

Guacamole SoCal Shrimp was okay; guac dotted with fleshy grilled shrimp, and accompanied by good chips, and seabass ceviche and, particularly, the salmon tiradito with a pleasingly punchy shichimi kept the mood building.

The arrival of falafel seemed slightly random but, as already mentioned, it’s a very good dish: they’re light, crispy and very well seasoned, with coriander, lime and a truffle chilli goma. From there, we zip over to Japan and the spicy tuna maki roll – perfectly acceptable if unmemorable, although the accompanying pickled ginger was exceptional – and then back to Mexico and hints of Japan for the tacos. When these are good, they’re very good: the gringo lobster – poached lobster, chilli butter, peppers, yuzu aioli, coriander cress – was terrific, ditto Bang Bang Kani – Alaskan king crab, spicy mayo, masago, that apparently ubiquitous yuzu aioli. The success of these two probably comes down to their respective hero (or, indeed, heroine) ingredient, but then the simplicity of the prawn taco was also a winner. For our money, the trailer park chicken and miso black cod tacos were fine rather than dazzling, but maybe we’re just jaded by black cod and fried chicken? Whatever, not our favourites on the night but easy to see why they have their fans. As for dessert, the matcha blondie, with white chocolate and coconut sorbet, would not have been my first choice – I’m yet to be convinced by anything matcha flavoured, I think – but was a big hit with the matcha fan (and baked goods expert) the other side of the table, so make of that what you will.

Oh, yes. Back to that local crowd. The return to eating out after so many months of lockdowns and such like has turned me into even more of a people watcher than I was before. Busy settings like Los Mochis would be an absolute gift at the best of times but this particular Tuesday was the gift that kept on giving. I cannot remember the last time I was surrounded by such a bunch of whiny, overprivileged gits, not can I remember the last time I witnessed such remarkable restraint from restaurant staff. Seriously, Los Mochis staff, take a bow. You rocked. Personally, I’d have been dropping plates “accidentally” into at least three laps that night and far, far worse in the case of the man sitting directly behind me. I mean, I was just a customer and I came this close to stabbing him with a fork. Quite how the staff kept smiling through all his spoiled whining I have no idea… but then that’s the reason I’m a journalist not a waiter. The thought has crossed my mind of late, given staff shortages post-Brexit, that perhaps I should throw my hat into the hospitality ring, see things from the other side. That night at Los Mochis proved that I don’t have the temperament but holy crap, we need to appreciate the servers who do. So tip, dear reader. Tip big. And do pop down to Los Mochis. There are nice things to eat and drink, the staff are exceptional and they really deserve some customers who aren’t brats.