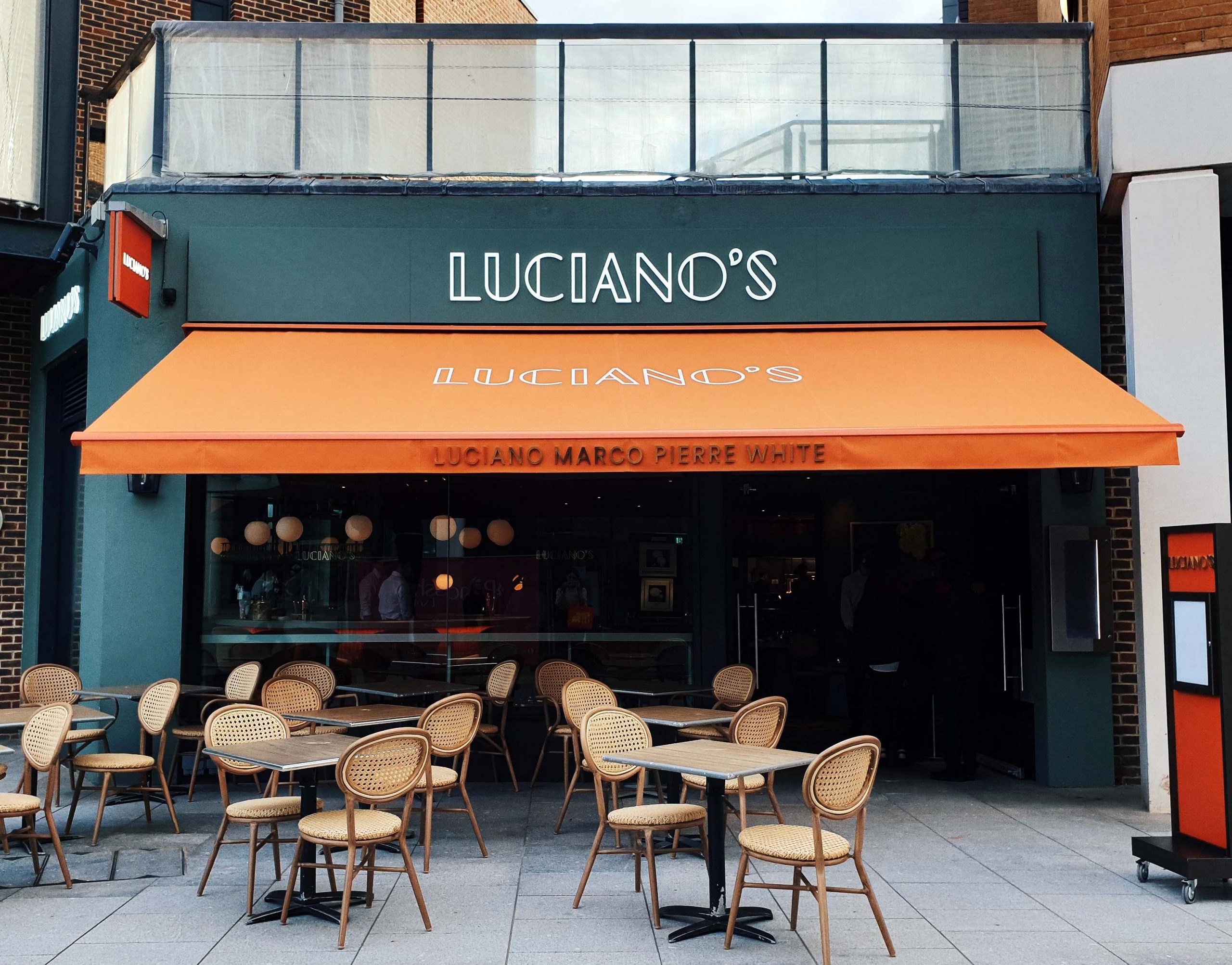 Any new restaurant deserves a look-see, but one connected with the name Pierre White is a must-see. But this one’s not about papa Marco (aka Marco Pierre White) Britain’s original celeb chef, first winner of  three Michelin stars, enfant terrible, violent and foul-mouthed trainer of the likes of Gordon f*****g Ramsay, who he once made cry. This one’s all about Luciano, Marco’s eldest son (not to be confused with his youngest, bad-boy Marco Jr., who hogged the headlines on Big Brother UK with alleged on-air sex and the admission of purchasing illicit drugs and a sex worker?!?). Luciano, impossibly good-looking, a lean flop-haired Borzoi to dad’s haggard, overfed Labrador look, is climbing up much the same kitchen ladder as Marco, and, unlike his errant younger brother, is keeping his head down, nose clean, and building the start of a restaurant chain Luciano’s, that started in Dorchester, with Exeter just opened. Next stop Bath?

Luciano’s occupies a site left vacant by Carluccio’s – an economic victim of the lock-down – in one of those nondescript back streets bordering Exeter’s exquisite C10th cathedral. Despite a howling wind and drenching rain outside, the room was busy on the Tuesday of my visit. Divided into two with an open kitchen, flanking bar and about 100 covers, it’s a big place to fill night after night. The clientele were mostly 30-40 year-old couples, with a few from the large student population hereabouts. First impressions? Mmm. Whoever did the décor loves Andy Warhol. Repetitive Marilyn Monroe Athena prints dominate the walls, their garish oranges and yellows echoed in the banquettes, tables topped in what kitchen salesmen call laminate; more station buffet than sassy new restaurant.

I had studied Luciano’s online menu before going and made my choice…or so I thought. ‘Fresh Cornish white crab bruschetta’ to start, followed by ‘Lobster burger with Marie Rose sauce, and iceberg lettuce in a brioche bun’. Oh dear. Disappointment struck before we were even seated. The brusque front-of-house manager Gareth welcomed us with the news that the “Lobster burger is off. We’ve run out of buns”. As we were being seated I found myself utterly bamboozled by this brioche famine. After all Waitrose, open until 22.00, is only a 15 minute walk away. I considered asking Gareth to get the K.P. to nip over and get me a bag of brioche buns. I even thought of going myself. Then I looked at the pelting rain outside and the moment passed. No Lobster burger for me.

Luciano set out his first stall in Dorchester followed by Exeter with a clear and strict middle-market pricing policy – mains £14.50, most of which are pasta – then extra for the likes of steak or lobster, starters around £8.00. Very sensible, very corporate, very unadventurous; but the accountants will be happy. With your main comes a complimentary glass of wine, beer, soft drink or Bellini; good strategy to encourage punters to order more booze. Again, nothing sky-high, sourced from around the Veneto region pairing well with the food and his nonna’s cooking. We had a decent enough Pinot della Venezia at £24.

Luke, our efficient young waiter brought my ‘Fresh Cornish white crab bruschetta’. Gareth had assured me the crab was indeed ‘Fresh’, and that it was Cornish (why not Devon? Brixham fish market’s only down the road) and that it was dressed in the kitchen. So I would expect. But as I tried to taste the first portion, disappointment enveloped me again. The bruschetta needed a hacksaw to cut it and the thinnest, meanest, covering of crab meat just about concealed what tasted like white cabbage and mayo beneath bulking out the portion.

Determined not to be diverted from some lobster, bun or no bun, I chose it with tagliolini, and boldly ordered a side of thick cut chips. I waited for the ghost of Marco to appear. Legend has it that he regularly ejected awkward patrons from his restaurant. When a customer asked for chips with his lunch, White hand-cut and personally cooked some, then charged the customer £25 for his time. I kept nervously glancing over my shoulder but no Luciano or papa materialised to throw me out, meat-cleaver in hand.

Ill-luck comes in threes, they say. Luke brought my main, and any expectations I might have had of tasting some sweet juicy chunks of Devon lobster nestling in a bed of pasta were dashed on the rocks. Flakes yes, chunks no. The non-descript sauce overpowered the miniscule fragments of flesh which I could not swear to being lobster without forensic analysis. The chips were great.

I asked Luke why the background music had suddenly gone from being, well, background, to a level that threatened to drown out conversation. Obviously thinking on his feet and mindful of giving the correct company impression, he gave an unconvincing explanation about ‘automatic volume control’ and ‘remote adjustment of loudness’ or some such fluff. That man will go far. I liked him.

Luciano was elsewhere the night we ate, possibly negotiating the opening of a new branch, which will be successful no doubt, offering an affordable set menu to folk who might otherwise patronise the likes of Zizzi and will probably become just as ubiquitous. No knife throwing, no sex and drugs scandals. But, equally, no supervision, rejection of teeth-shattering bruschetta, or resolution of briochegate. With the restaurant only weeks old, chef must surely set a higher bar for his staff to live up to. Less portion-control, more passion please!

Not all customers are as critical as I am, some just want pleasant surroundings, perhaps the added frisson of being able to say they have been to a restaurant run by “that famous chef, you know, Marco Pierre Something’s son”. Decent food (unless you want a brioche, or more than a hint of crab, or decent chunks of lobster). Restaurant chains are everywhere, many capitalising on celeb-names: Jamie, Ramsay, Heston, Stein, et. al.. Then there’s Prezzo, Zizzi, ASK, etc., offering Italian themed food.

In two years I’m certain Luciano will have added more city-centred establishments like the one I ate in. They rely for success on strict formulae and staff that run a tight ship. Not all the meal was disappointing though. For dessert a sorbet with fresh raspberries provided a yummy finish.