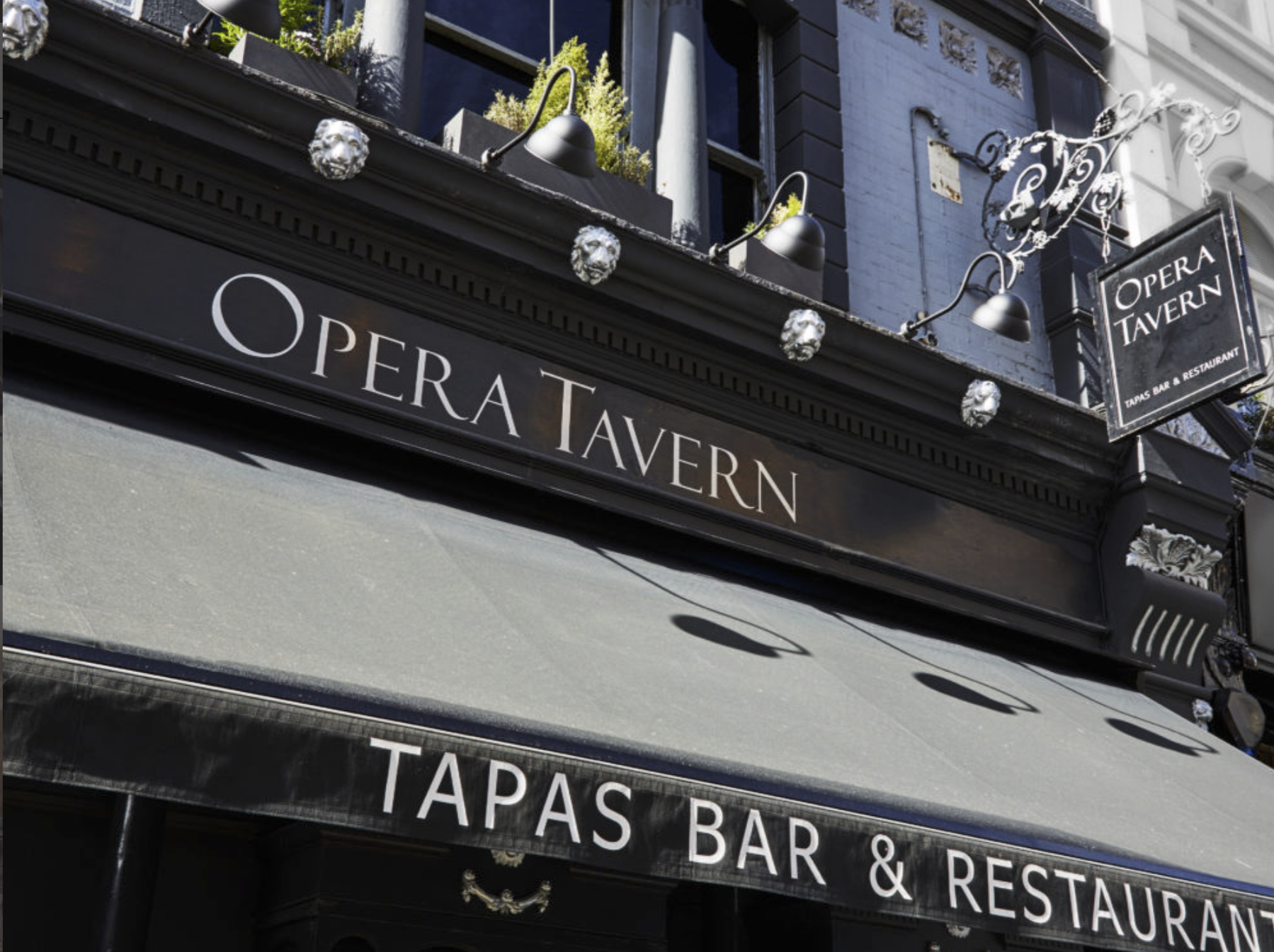 Covent Garden has always been famous for food. Whether the said restaurant is feeding theatre-goers, tourists or roaming Londoners; the choice here is fantastic. This was very clear on my walk to and from Opera Tavern. I went passed Cote, Sophie’s Steakhouse, PJ’s bar and grill, Brasserie Blanc, One Aldwych, Boulevard Brasserie.. etc etc. The choice is endless and include of some of London’s most popular venues. Witnessing all of these restaurants conjured an intense feeling… hunger. I couldn’t help but think this better be worth it – particularly that it was for tapas (a cuisine I’m starting to grow tired of).

The layout of Opera Tavern is almost entirely geared toward a fast table-turnaround. There are a handful of tables for couples, one larger table (could happily seat 4, 6 at a push) with the majority of the tables facing outside at the street-side window. There were a few people with small bites at the bar but it was obvious they weren’t there for the long haul. It seemed as though everyone was passing through. I guess that’s what has given it its ‘Tavern’ title. Having been asked the standard tapas restaurant, “have you eaten here before” and then having had the ‘concept’ explained to me, I ordered. Rillions: Absolute highlight. I loved the fact that I had no idea what they were, and was ecstatic to learn that they are crispy and come from a pig. Anyone who can’t enjoy crispy bits of pig shouldn’t be allowed in a restaurant. Mini Ibérico Pork and Foie Gras Burger: Very exciting to look at on the menu, but wholly underwhelming since the foie gras was completely undetectable! Such a shame since it was a fine burger, but the lack of foie gras sweetness stifled the enjoyment.

Pan Seared Scallop with Celeriac Purée and Smoked Butter, delicious, but could have done with being caramelised slightly more. Slow cooked Beef Shin with Charred Onion Purée, Girolles, Salsa Verde and Smoked Anchovies: also delicious but VERY rich, owing perhaps to the presence of the anchovies. This would have benefited from some sort of creamy accompaniment to cut through the tang. Chargrilled Quail with Squid Ink mash, Chorizo oil and Migas: Loved the novelty mash, though not sure that the squid ink actually added any flavour. The quail could have done with being a little more charred so that we could have had a crispy-on-the-outside, soft-on-the-inside experience.

On the whole, Opera Tavern was a great night and I enjoyed the food. There was, however, one problem that can’t be overlooked: The portion size. This is one of the biggest problems I have with so-called ‘Tapas’ restaurants. Many of my friends, who love restaurants where sharing food is the theme, always try to counter my disdain for this form of dining by saying, “it is good value for money” or “sharing food is fun”. Now I used to agree with these sentiments, wholeheartedly and I used to like sharing food. But recently restaurants have started to take advantage of diners by pushing the boundary on what can be considered a sharing dish. For example: though I liked the Foie Gras burger at Opera Tavern, we were given one (and a small one at that). This lead to us awkwardly attempting to cut the burger into two pieces, causing an absolute mess and meant by the time we had allocated our portions, the burger had lost its integrity and had to be eaten sporadically and had spread around the entire plate– the whole point of a burger is to experience an array of tastes with each bit (it is why it has a layered structure after all).

This had more of a resemblance to mince with croutons. The biggest annoyance, though, were the scallops (or scallop I should say). They were delicious… an absolute triumph. Who doesn’t like scallops? (Whoever doesn’t is just wrong in my opinion).When ordering tapas, a couple will order some dishes for themselves and some to share. It is just the universally accepted way to order sharing food. When scallops are on the menu, more often than not a couple will both decide on them (they’re scallops after all). So why then would they present us with one? Just one, lonely, solitary scallop at a tapas restaurant. Is this good value for money? All this being said, the quality of the food was such that these portion errors could have, perhaps, been excused but for the biggest travesty… the king prawn (notice the singular again), how is someone supposed to share a prawn?

With its shell on! Having arduously removed the shell while trying to keep a hint of grace in an attempt to avoid showing myself up in front of my female companion, we were left with a portion that was not sufficient to earn the title ‘King prawn’… Peasant Prawn would perhaps be a more fitting pseudonym. The idea of Tapas is to pick and chose as you wish: try a little bit of that, a lot of this and some of those. Not having to cut everything in two. It seems Opera Tavern have the ability to make great food, there’s just not enough of it. I’m not asking for massive troughs of food, simply another scallop another prawn and another burger. It will make all the difference and avoid customers feeling cheated. Particularly when Sophie’s Steakhouse, around the corner, has two steaks that top 30oz!!!