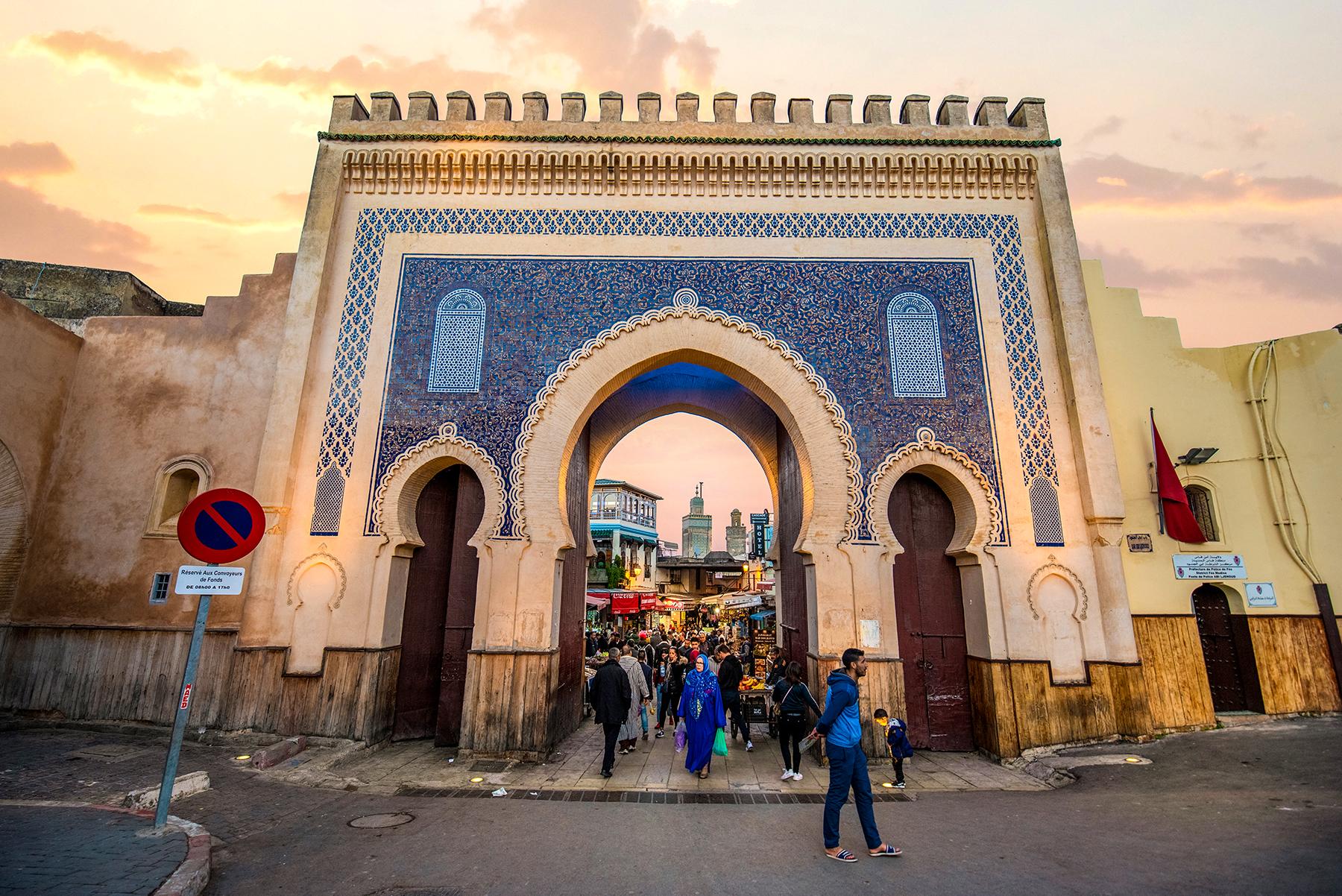 As a former capital of Morocco, the city of Fes has a rich history dating back to 789 AD. The city sprawls across the inland hills of northern Morocco, a dry landscape fed by the river Fes. The real heart of Fes lies within the oldest walled area of the medina, known as Fes-el-Bali, with the Bab Bou Jloud (also called the Blue Gate) at one end and the architecturally impressive Quaraouiyine Mosque (the second biggest mosque in Morocco, sadly not accessible to non-Muslims) at the other. Between these two places, it is no exaggeration to say that the tiny alleyways twist and turn and overlap in such a way that tortures the mind – let alone the body, if one loses one’s way during a 40 degree August afternoon. This area is also, however, the location for the Palais Amani, a luxury riad and spa where fruit trees and a cool fountain provide much needed respite.

If you like Marrakech, you might still find Fes a bit oppressive. In four days, I lost count of the times I had to ignore a man insisting that I was going the wrong way to get to a place where I didn’t want to go. The alleys through the souks are much narrower and there is less policing of the area than in Marrakech, where there are many more tourists. That said, who wouldn’t choose to experience a place with fewer tourists? Shops selling the traditional djellaba robes, jewellery, amber, spices and leather line both sides of each pathway and spill across them, but some areas are better known for metalworking, some for food, some for pottery. One can almost navigate through the souk by following the acrid smell of the various tanneries; these are worth seeing from an upper floor to get the best view of the patchwork colours of the vats of tanning skins (go in the morning, so the sun hasn’t had a chance to heat up the pungent liquids involved).

Our visit coincided with Eid al-Adha, the holiest holiday in the Islamic calendar, when Muslims mark the willingness of Ibrahim to sacrifice his son for God by killing and eating a sheep with their family. As such, sheep are being transported to family homes in various ways; I have seen sheep strapped to a moped, in a wheelbarrow and galloping through the souk in a final bid for freedom with several young boys in hot pursuit. What is most surreal, since the sheep is kept in the home prior to the festival, is the disembodied bleating that can be heard from almost every doorway as you pass, and then the eerie silence, accompanied by hanging sheep pelts waiting to be collected, which signal that the day of ovine reckoning has passed.

Amongst the other things to see in Fes are the Dar Batha craft museum and the Funduq al Najjariyyin, a former inn where the most exquisite woodwork can be seen. Further outside the town, the Merenid tombs and the Borj Nord Arms Museum can best be reached by hiring your own car and, if you’re going to do that, the highly photogenic blue city of Chefchaouen will make an excellent day trip.

If you’re all about relaxation, though, Palais Amani is spacious enough and offers enough activities of its own to keep you busy for a couple of days. The riad’s rooms are beautifully and traditionally appointed – ours had the highest ceiling I have ever seen in a hotel room – with full height windows onto the gallery above the courtyard. The bathroom was a separate inset room with a flat top and there was a small seating area on the other side. I couldn’t help wondering if the space on top of the bathroom might have been useful for something, but there was plenty of space and the room was a welcome haven after an adventure through the souks.

Whether you choose to dine on the terrace overlooking the rooftops of Fes, or in the cute courtyard below, the Palais Amani’s restaurant Eden offers an intriguing and delicious range of Moroccan dishes for breakfast, lunch and dinner. In the morning, one is served an incredible array of olives, sauces and cheeses to accompany the daily breads, yoghurt, nuts, fruits, an optional Moroccan dish and then eggs, comprising a breakfast fit to feed an army! The highlight for me was always the strong coffee and the berber style eggs which came with shreds of salty dried meat. If you need much, after all that, a lighter version of the dinner menu is served, including wraps and nibbles, while dinner sees more substantial signature dishes, such as filo-wrapped pastilla and a selection of tagines.

Palais Amani also has very well executed cooking school, where their in-house chef takes you for a tour of the souks and shows you all the best locations to purchase the ingredients for the lesson, as well giving you the chance to try some local street food favourites like the chickpea soup, traditionally consumed as a warming morning meal by workers, and crunchy honey pastries. Back at the riad, we popped on our pinnies and fez hats, and spent a couple of very interesting, if sweaty, hours learning how to make zaalouk (a spicy vegetable salad), chicken tagine and jawhara (a filo and condensed milk dessert). At the end of the lesson, we were able to freshen up and then our food was served to us in the dining area downstairs.

As you may be aware, the hammam is traditional in many places in north Africa and the Middle East as a regular cleansing ritual. Palais Amani has its own hammam underground on site and this allows guests to enjoy this experience in luxurious privacy. If you have never had a hammam, doing it in privately in a hotel is the very height of decadence. For the people of Morocco, a weekly hammam is customary; men and women go into separate rooms and sit in dry hot rooms before using black soap to scrub and exfoliate, assisted by staff or each other, and followed by other masks and lotions to absorb impurities and replenish minerals in the skin. I was taken through the hammam by Fatima, who put me entirely at ease, even though the dim light made the rooms a little difficult to navigate and I am not used to having strangers massage my naked body, then hurl buckets of warm water at me. However unusual I found the experience at the beginning, thanks to Fatima, I was quickly able to relax and came out in a halo of steam and serenity, smooth-skinned and glowing.

Palais Amani really is the best place from which to explore Fes. Right in the Fes-el-Bali, you can get lost in the souk only minutes from your own door (this experience is a must), while the luxurious riad caters for your spa and dining desires tucked away from the hustle and bustle of the ancient city. Easier to reach from the UK than some European cities but different enough to feel like an adventure, Fes is even a potential weekend city break destination that will have your colleagues fascinated at the water cooler on Monday. Brimming with history, Fes is a great up and coming destination and the Palais Amani is your haven at the heart of its wonderful chaos.

Meet the 2019 winners of the Eluxe Awards