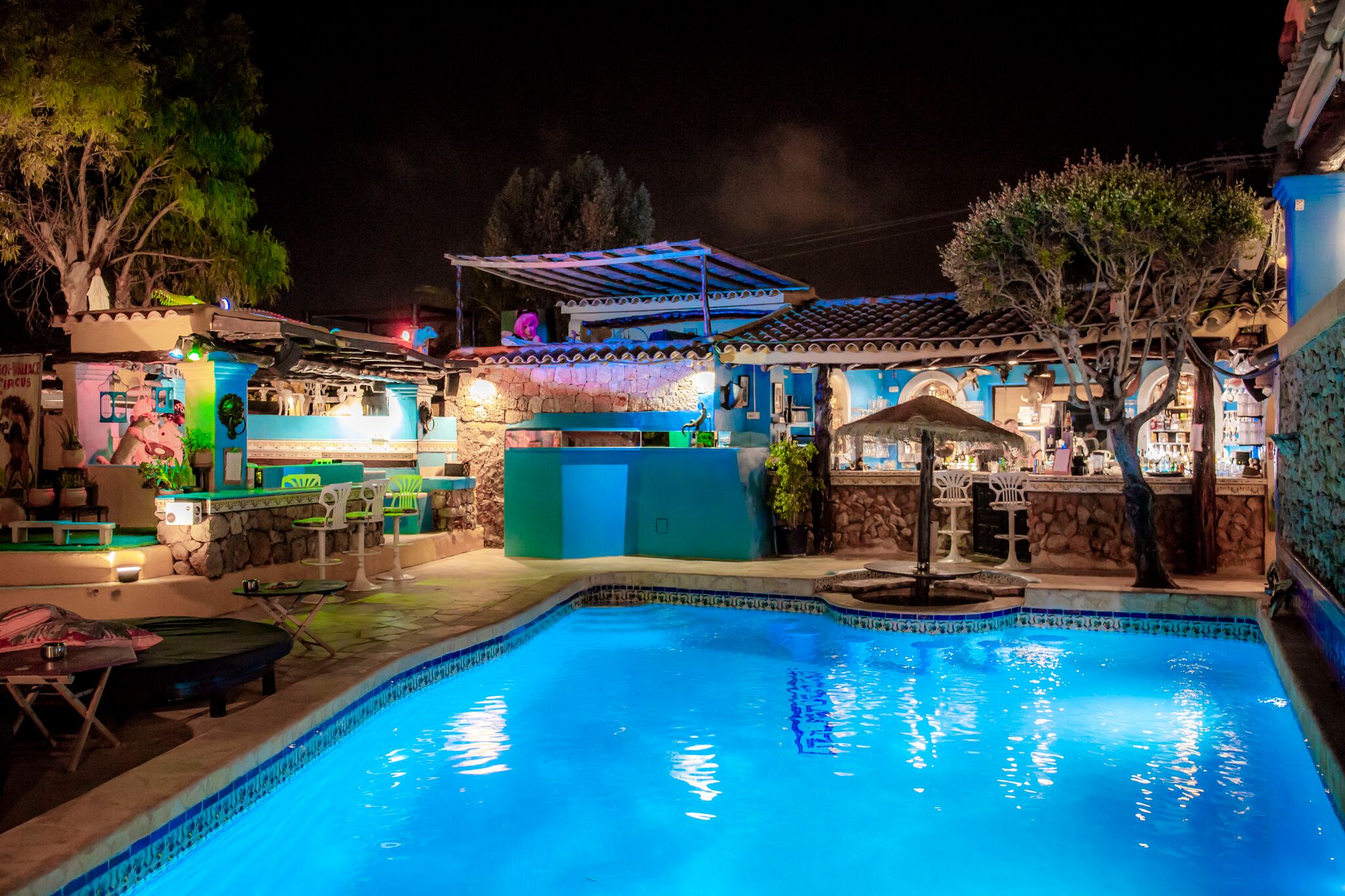 The dictionary definition of Kitsch is – ‘a style of design using popular or cultural icons with aesthetics that favour exaggerated sentimentality. Kitsch is also related to the concept of camp, because of its humorous and ironic nature.’

This could also be the definition of Pikes Hotel, an ochre-coloured finca that has been an Ibizan institution for over four decades. Nestled in the hills, well away from the San Antonio tourists, the hotel was originally made famous when used as the location for Wham’s ‘Club Tropicana’ video. In which Pikes founder, the legend and Lothario, Tony Pike makes a cameo appearance.

With an intimate bohemian vibe, that makes it feel like you’re at a private house party, Pikes is a stark contrast from a hotel chain. Old school, rock n’ roll fun, with as much soul as (regular former guest) George Michael, the hotel’s unrivalled musical heritage is evident in walls covered with framed photos of legends such as Julio Iglesias and Freddie Mercury. Both of whom had suites especially built so they could use Pikes as their holiday homes.

Cut to the present, and after a revamp by Andy McKay and Dawn Hindle (founders of Ibiza Rocks), Pikes was named as one of the Top 100 Hotels in the world by Sunday Times Travel. The only hotel in Ibiza to make the edit. It’s also been the winner of ‘Best Boutique Hotel’ by the prestigious White Ibiza Awards for three years running. Moving with the times and is shaking off its reputation as a party place, Pikes is repositioning as a cultural hub. Hosting a raft of art, literary, food and music and popup events throughout the upcoming season.

Staff ‘uniforms’ are  exclusive tropical disco print shirts by Silken Favours, setting the ironic mood. And extraordinary artefacts can be seen in every nook and cranny. Collected up over the years, quirky pieces include everything from vintage circus signs to taxidermy. And talking of quirky artefacts – part of the Pikes charm is octogenarian Tony Pike, who still lives at the hotel, happily regaling guests with his life story, such as his time dating Grace Jones.

A little rough around the edges, no hold on – that’s harsh, let’s say, ‘lived in’, what Pikes lacks in luxury appeal it makes up for in personality. And navigating your way around this hidden gem is a whimsical wonderland adventure. On my most recent stay I was in the Rockett St George designed suite. One of those cool kind of rooms that makes you want to invite people ‘Back to Mine’. With palms, monkey lamp, wall mounted (faux) zebra head, I particularly enjoyed the pink neon ‘Kiss Me’ sign above the bed. Along with a beautiful white painted rafter ceiling using whole tree trunks. The bathroom suite looks kind of errr…“vintage”. And has made me want to start a ‘bring back the bidet’ campaign. There’s also a shower curtain – a rarity for a hotel in this century.

There’s an a la carte menu available for breakfast, but we opted for the simple continental affair that’s included with the room. Including fresh pastries, fruit, yogurt and homemade compote. It’s also worth noting that the home cooked style Sunday roast served at Pikes, is considered by some best on the Island. And a mostly older crowd treat Sundays at Pikes as a destination day out. With lunch followed by an afternoon lounging on Balinese beds by the pool or recreating that iconic pop video, with cocktails on stools submerged in the pool. A place where membership’s a smiling face, you can still brush shoulders with the odd star. And although the drinks may not be free, there is a pretty decent ‘Wham’ smoothie for 9 euros!