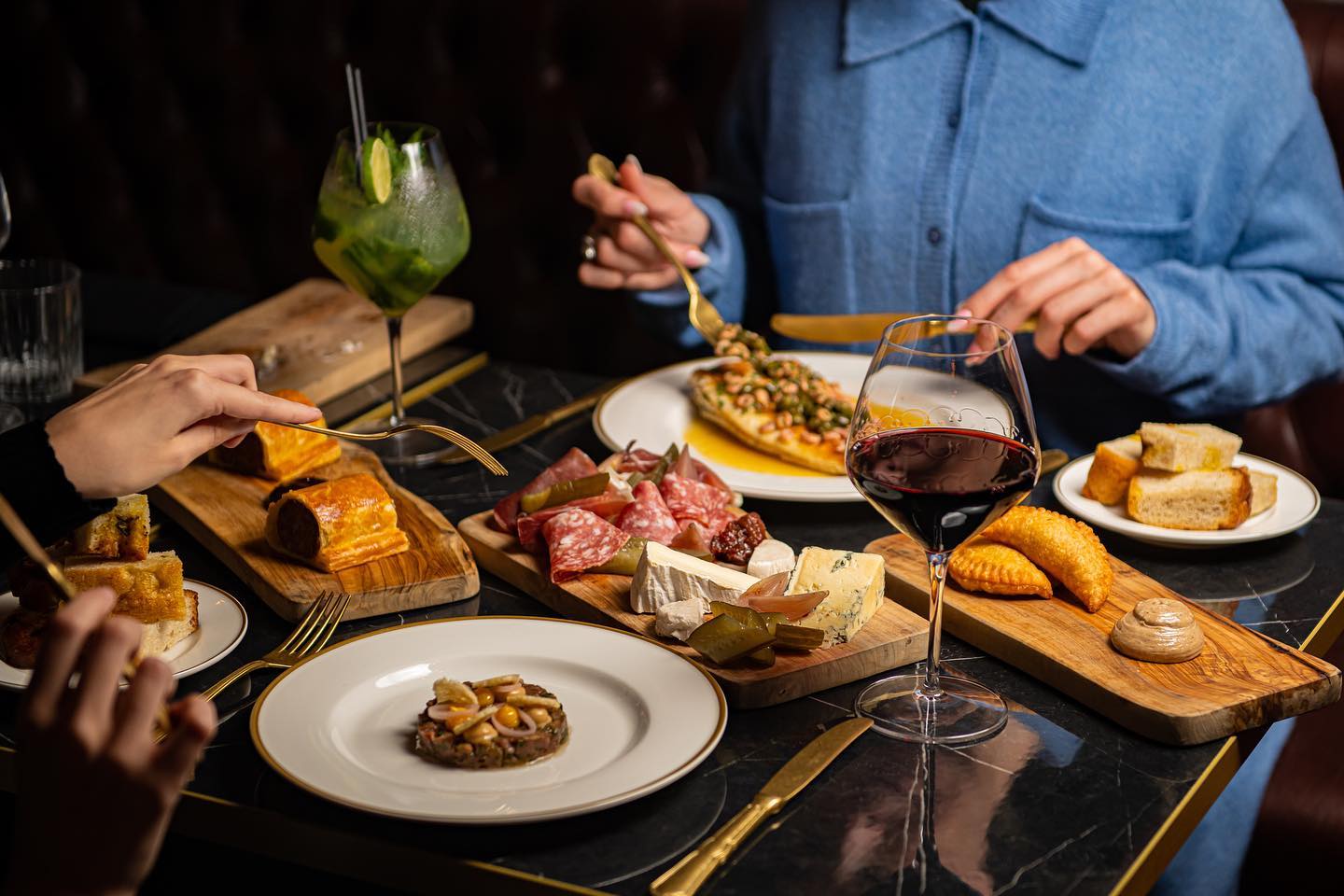 There’s no doubt the last 18 months have been hard on hospitality. The new way of working from home has had an effect on the number of people frequenting city centres for a spot of lunch or a casual dinner with colleagues and for many restaurants it’s been a struggle. But as with everything life throws at it, Manchester always bounces back and rather than being in decline, the dining scene is more exciting than ever! With the city gaining its first Michelin star restaurant as well as a thriving market hall style dining scene in full swing, there’s never been a better time to be a foodie in Manchester.What’s more there is still room for new and exciting restaurants, so I dragged my reluctant fiancee away from the warmth of our log burner and into the city for a 3 course dinner at Rendition.

Located at the end of Deansgate on the edge of Spinningfields (the nice end!) Rendition came into being by a group of ‘likeminded forward thinkers passionate about sustainability and quality’. The restaurant serves only locally sourced and inspired dishes that champion British produce, offering a seasonally inspired and ever-changing menu alongside unique culinary events. Translation: Local produce, cooked beautifully. Sounds good to me!

The interiors of Rendition look best in the evening, when the deep red leather chairs and dark furnishings fade into the background while the intricate gold trims and shiny marble tables catch the light from the incredible lighting that hangs over the restaurant. I found myself looking above completely transfixed quite a few times but was then quickly distracted by the table lamps.

As someone who works in social media I am one of those insufferable people that takes photos of their meal but I couldn’t quite get the right lighting for a shot of the first course. At that moment the hostess demonstrated that the lamp on our table can not only be picked up and moved but also has three different brightness settings at the tap of your finger. This of course infuriated my partner who then had to wait while I conducted a semi professional photo shoot before he could take a mouthful of each course.

At first we were offered something for the table and there were more than a few things that took my fancy such as Native Oysters (not sure where you’d find oysters native to Manchester) and North Yorkshire potato croquettes with tomato jam and cured meats and pickles. Deciding 3 courses was more than enough we opted to go straight for a starter.

Starting with Summer cabbage, slow cooked duck egg, pickled blackcurrant and sesame, I did wonder what on earth it will look like, as it truly takes a skilled chef to make cabbage and egg look good. What arrived was a shape of crisp sesame seeds on top of a perfectly formed round of cabbage and egg with flashes of deep red from the blackcurrant. Formed in a way that with every bite you discovered a new part of the dish, the yolk with the blackcurrant, the crunchy sesame with the soft cabbage. A really lovely dish. I had to go for one of my favourites, Seared Scottish scallops, summer tomato and horseradish. The scallops were done simply and perfectly which is really all I ever want. Why ruin them with overpowering sauces and extras when you can just do it well and enjoy it on it’s own? Saying that the summer tomatoes were a fabulous accompaniment, their different colours brightening up the plate and tasting as if they’d come straight from my dad’s greenhouse when I was a child. The dish also came with croutons, cranberries and a green oily sauce which looked lovely and gave it some colour but didn’t really add anything to it. But saying that I ate every single thing on the plate!

The mains on the a la carte menu are divided into ‘Field, Sea and Land’ along with a number of sides which our server recommended at least one between us with any main. When I eat out I always opt for something I wouldn’t make at home so I chose the Glazed breast of duck, sausage, smoked bramble and shredded broccoli. Now I presumed ‘shredded broccoli’ would just be the tiny heads of broccoli scattered around the plate but what I actually got was just three small heads thrown on the plate for good measure. It barely made up a portion of my five fruits and veg a day and wasn’t anything particularly special so I didn’t really see the point. The sausage was nice and full of flavour and the addition of small pieces of the duck skin was what really gave the dish that extra bit of oomf. However, the slabs of perfectly pink duck breast doused in the rich, silky jus were enough to take my mind away from reality long enough to the point where all you can do is close your eyes as you chew and say: ‘Mmmmmmm’.

It’s a very rare occasion that my partner chooses a better meal from the menu than me and I have to say I had real food envy when he gave me a bite of his dish. He went for the Roasted rump of lamb, caramelised leeks, crispy sweetbread and anchovy mayonnaise and as soon as I saw it I thought ‘I want that’. With perfectly charred rounds of leek and wild mushrooms, the combination of flavours as well as the beautifully soft lamb was just sublime. The fact that he (the man who is supposed to love me) only gave me one bite despite me having to review the dish is probably all you need to know about how good it was. We shared a huge side of suitably crunchy chilli and garlic green beans (definitely making up for the lack of broccoli on my plate!) and the highly recommended triple cooked chips which were simply superb and mopped up every last bit of red wine jus.

Although I am a huge chocolate lover I wasn’t quite in the mood for the Rendition Baked hot chocolate fondant with candied walnut cracker recommended by our waitress and I instead fancied something light and fruity. Although I was nicely full from my previous courses I was slightly disappointed with the size of my iced strawberry parfait with caramelised white chocolate and lime, as it wasn’t much bigger than an actual strawberry. Don’t get me wrong, it tasted sensational and was every bit as fresh tasting and indulgent as I thought it would be, it’s just that I could have eaten three of them! My partner’s choice however was a very substantial size, Lemon pie with basil sorbet. Just when you thought he’d be presented with a triangular slice of lemon tart and a ball of green sorbet you’d be pleasantly surprised by the layers of pastry encasing a delicately smooth lemon filling and a irresistibly fresh sorbet, topped with freeze dried raspberries. Filling yet fabulously moorish I would have chosen it over chocolate fondant any day.

Despite having red meat for my main I couldn’t resist a couple of glasses of The Crossings Sauvignon Blanc, a fresh style wine with generous tropical fruit flavours with hints of citrus and fresh herbs that went very well with the scallops starter and was the perfect accompaniment to my fruity dessert. The cocktail menu is definitely worth a look too, with signatures such as the ‘Rendition Zombie’ and a mimosa made with pineapple and rum topped with prosecco.

With starters and desserts for less than a tenner it is competitively priced for the area, especially considering the quality of ingredients and the restaurant’s efforts to offer a more sustainable option to diners. The service we received was impeccable, with genuine interest in our tastes and trustworthy recommendations as well as being served some of the dishes by the chefs themselves, which I always enjoy as it presents the opportunity to offer genuine thanks to those who make the whole experience memorable.

Would I go to Rendition again? I would. Would I order what my fiance had or at least take someone willing to share? Absolutely!