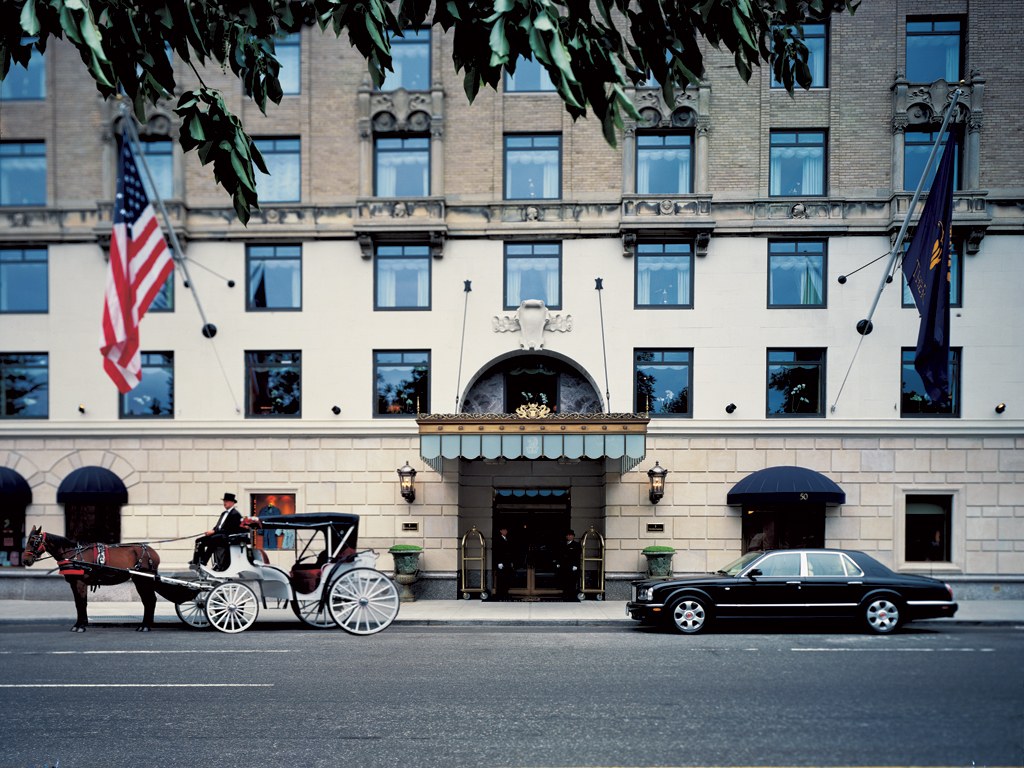 With a skyline that’s recognizable worldwide and more than 8.3 million people from all corners of the globe who call it home, New York City is a one-of-a-kind destination. Each of the five boroughs has its own distinctive flavour, while individual neighbourhoods, streets and even single blocks maintain identities all their own. Whether it’s your first visit or your hundredth, there’s always something new to see and do, from world-class dining to shopping to nightlife to culture, New York City’s streets pulsate with an unmistakable rhythm that attracts more than 45 million visitors annually. I was one of these visitors, flying in on British Airways business only flight from London for a whirlwind tour of this great city with local gal Cara Alwill Leyba. As I was only there for two days it was Manhattan the smallest of New York’s five boroughs that we were seeing all in a “New York Minute”. I was staying at the perfectly located Ritz Carlton Central Park, one of three Ritz Carlton hotels in New York City and part of the same group as The Ritz on Piccadilly in London. The hotel opened in April 2002 on the site of the old St. Moritz Hotel in the prime location overlooking the iconic Central Park and within walking distance of the city’s best shopping and tourist attractions, including the shops and boutiques of Fifth Avenue, what more could this fashionista and Lady about town want?

The 33 storey hotel is housed in a striking 1930’s building designed by Emery Roth, the result is that of an elegant New York townhouse with artwork of American modernist Samuel Halpert adorning the walls. We checked in at the grand reception, dressed in dark woods and colossal flower arrangements, and meet the charming Patrick, Director of Sales, and Tina, PR Co-ordinator for this hotel. Ascending to the 8th floor in the quaint dark wood and gold elevator I made my way to my suite, a grand room with walk in wardrobe, giant king sized bed, bathroom with separate WC, bath and waterfall shower but the crowning glory of this room was the panoramic views of Central Park and beyond.

Central Park, which has been a National Historic Landmark since 1962, was designed by landscape designer and writer Frederick Law Olmsted and the English architect Calvert Vaux in 1858 after winning a design competition. They also designed Brooklyn’s Prospect Park. The park, which receives approximately thirty-five million visitors annually is the most visited urban park in the United States and from my vantage point at the Ritz Carlton Central Park I could see why, the never-ending vista of trees surrounded by the plush buildings of the upper east and west side was truly breathtaking.

After a refreshing shower I donned my slinky Calvin Klein LBD and Yves Saint Laurent killer heels for a night out at one of New York’s hippest new offerings, Beauty and Essex in the Lower East Side. Back at the Ritz Carlton we hit The Star Lounge, a traditional stand-up bar, where guests can enjoyable a cocktail or two while listening to live music care of the grand piano in the lounge or a conversation with legendary bartender Norman Bukofzer. We took a seat in the lounge next to the piano and reclined back in to the plush seats, I ordered an Espresso Martini (with rum of course) which, despite the bartender looking somewhat bemused at my request, was perfection, a great end to a fabulous first day in New York. Retiring to my suite I stood overlooking the night sky and the glittering lights of the upper east and west side, I could suddenly understand why Carrie said in Sex and the City her greatest love was New York City, because for me, it was love at first sight.

My love affair with this great city continued, waking fresh and relaxed after a wonderful nights sleep in my Noah’s Ark sized bed I opened the blinds to Central park, highlighted by the early morning sun, I found myself smiling like the Cheshire Cat in the knowledge that today I was to explore this little island of Manhatten, but first, breakfast. I made my way down to the Ritz Carlton Club Lounge, a feature offered at this hotel for guests who seek a heightened level of luxury and privacy. The lounge is a peaceful retreat featuring private check-in and check-out, complimentary food and beverages as well as a dedicated concierge. The La Prairie Spa is also located adjacent to the lounge, the only full-service La Prairie luxury day spa in America offering beauty and wellness therapies as well as intensive body indulgences.

Perusing the breakfast menu there was only one thing for it, for I was in New York, I ordered the buttermilk pancakes with crispy streaky bacon and maple syrup washed down with a skinny latte (it’s all about balance). The pancake stack was monumental, three dish sized pancakes with a mountain of bacon and a gravy boat’s worth of maple syrup, staring at the feast I was glad that so much walking was on the days agenda! After breakfast I waited in the lobby for local gal Cara Alwill Leyba, friend and fellow Bespoke writer, for it was her mission today to take me around Manhattan in a “New York Minute” being I was only in the city for a mere 48 hours. A New York minute is an instant, or as Johnny Carson once said, it’s the interval between a Manhattan traffic light turning green and the guy behind you honking his horn. It appears to have originated in Texas around 1967. It is a reference to the frenzied and hectic pace of New Yorkers’ lives – a New Yorker does in an instant what a Texan would take a minute to do. I was lucky that London moves at a similar pace or I may have found myself out of my depth! Cara entered the hotel looking glamorous as always, after much screaming and hugging we hit the sidewalk, ready for our whirlwind tour of this iconic island. We headed to Fifth Avenue first, home to many prestigious shops, consistently ranked among the most expensive shopping streets in the world. We took a detour to Bryant Park which is a privately managed public park located between Fifth and Sixth Avenues in Midtown Manhattan. Famous for New York Fashion Week and also used as an urban oasis by office workers on sunny weekdays, city visitors on the weekends, and revellers during the holidays.

Cutting through the park we headed for Time Square, iconified as “The Crossroads of the World” and the “The Great White Way” it is the brightly illuminated hub of the Broadway theatre district and one of the world’s busiest pedestrian intersections and more importantly home to the Naked Cowboy. Weaving through the street markets and tourists we made it to the TKTS and the Bleacher Seats, centre of Time Square, looking back at One Time Square, site of the New Years ball drop, the monumental size of this space hits you, from the Coca-Cola sign to the elegant Paramount Building this square is truly a landmark that has to been seen, and that includes the Naked Cowboy, who obliged my tacky tourist request of a photo.

Cara was not as convinced. We then headed to what must be one of the most iconic landmarks in New York City, the Empire State Building. The Empire State Building is a 102-story skyscraper located in Midtown Manhattan, its name is derived from the nickname for New York, the Empire State. Designed in the distinctive Art Deco style it has been featured in many a movie and TV program, perhaps the most famous popular culture representation of the building is in the 1933 film King Kong in which the title character, a giant ape, climbs to the top to escape his captors but falls to his death after being attacked by airplanes. Standing on top of this iconic building, steeped in history, it is difficult not to be overcome with emotion, to have seen what this building has seen over the years from The Great Depression to the Wall Street Crash, St. Patrick Day parades to many a couple marry on it’s breathtaking observation desk, including my lovely friend Cara, one of a very lucky few to ever get this opportunity. We next made our way further downtown, via the Flatiron Building, to the subway to the site of the new One World Trade Centre, the 104-story skyscraper is being constructed where the original World Trade Centre once stood. At the time of its completion in 2013, One World Trade Centre will be the tallest building in the Western Hemisphere and the third-tallest building in the world by pinnacle height, with its spire reaching a symbolic 1,776 feet in reference to the year of American independence. Despite not being a native New Yorker or American I still felt proud to behold such a building, both for its design merit but for what it represented. Rising out of the ground the glass building represents more than architectural triumph but a new positive outlook for New York City as one of the hubs of world trade and commerce.

We finished off at Battery Park, a 25-acre public park located at the Battery, the southern tip of Manhattan Island, facing New York Harbor. Standing there, wind through my hair, looking out to Lady Liberty I realised I was truly head over heels for this city, I had seen a lot, but the day was yet young and there were still many more “New York Minutes” left before we called it a day! Heading back to the Ritz Carlton, by New York yellow cab (it had to be done), we discussed the plan for out night out on the town. The plan was for cocktails in SoHo followed by dinner at Mercer Kitchen then clubbing in the East Village. After several hours of eating, drinking, singing and dancing (some assisted by a wind machine) we decided at 5am it was probably best, being I was flying that day back to London, to call it a night. Hailing a black city car we headed back to Ritz Carlton; I walked through the lobby, clutching my high heels and smiling like a naughty teenager, I made my way up to my suite and greeted by the dulcet tones of Andrea Bocelli I flung myself on my bed. I was overcome with amazement as to what we had achieved in one day, the sights I had seen, the food I had eaten, the feelings I had felt, the fact I was still awake! As I climbed under the 400 thread count sheets I was also come over with a terrible sense of lost, for tomorrow I was checking out of this beautiful hotel, this wonderful city and this “New York Minute” love affair.