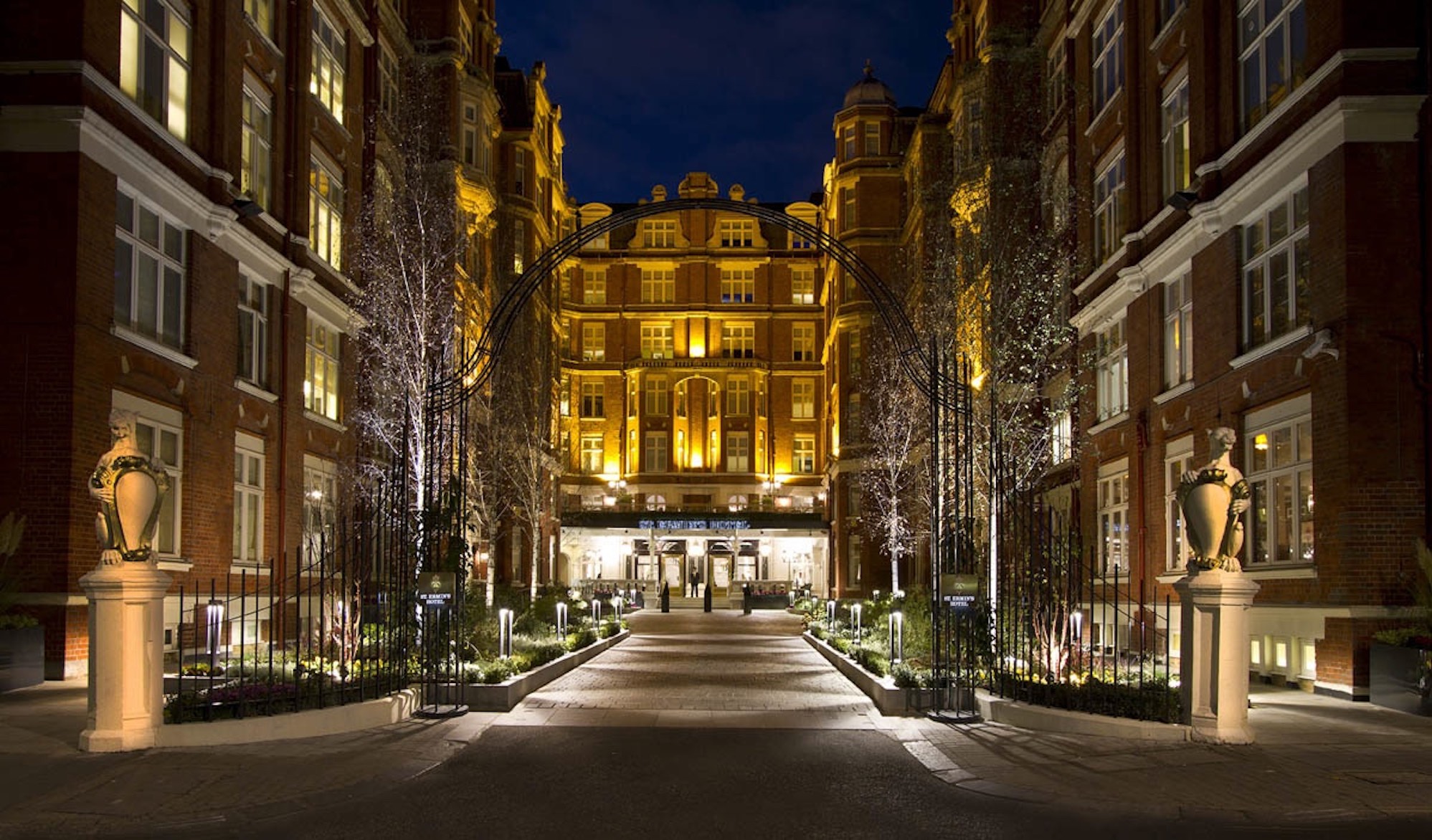 A tree-lined courtyard takes guests to a hotel full of history – on Caxton Street, you can find St Ermin’s Hotel, built on the site of a 15th century chapel.  In the mid to late 19th century, an increasingly large and wealthy London saw big changes in the Westminster area and St. Ermin’s Mansions was built in 1889. The building that now forms the basis of the hotel. Only ten years later the mansion blocks were converted into a hotel and the then new owners embarked on a major refurbishment.

They created a series of reception rooms with rich plasterwork, much of which is in evidence today. The original brochure for this hotel still exists and proudly proclaims that telephones had been installed in all bedrooms, rather than an antiquated bell system.

The hotel has more dramatic history, involving wartime spies.  In 1940, Winston Churchill held a massively important and ultra-secret meeting within its walls. He asked a group of remarkable people to join him in the aim of “setting Europe ablaze” and this elite set were to become the founding members of the SOE (Special Operations Executive). The unit carried out covert operations during World War Two from their headquarters, which were an entire floor of St. Ermin’s Hotel, whilst MI6 were stationed two floors above. The hotel’s involvement in secrecy, espionage and the major political events of the day continued well after the war. In the 1950s the spy Guy Burgess, part of the infamous Cambridge five, handed over secret papers to his Russian counterpart in the Caxton Bar at the hotel.

It is rumoured that a tunnel runs from underneath the grand staircase in the lobby all the way to the houses of Westminster – but I am not in a position to either confirm or deny! What I can tell you is that the hotel has 331 rooms and suites all designed to make guests feel at home. There is crisp bed linen, luxurious soft furnishings and inviting bathrooms with indulgent White Company products. St Ermin’s Hotel also has a signature restaurant, The Caxton Grill, which serves modern European food but for drinks and light meals, The Caxton Bar and The Caxton Terrace, with views overlooking the courtyard, are relaxing spots.

After taking a taxi up the tree lined courtyard my guest and I were delighted to see the beauty of the St Ermin’s Hotel – the grounds are full of flowers and trees, you feel like you are a step away from the hustle and bustle of London.

We were greeted by the doorman who showed us to the check in desk, where we were greeted by lovely staff members who explained about the locations of places we may need and speedily checked us in so we could take a lift straight up to the third floor and enjoy our stay.

As we opened the door to our family room, we were amazed to see we had not one but two bathrooms, one at either end of the room. And although it slept four, the room managed to look spacious and stylish with a day bed under one window, two double beds that could be separated into singles, and those luxurious bathrooms. There was no sense of compromise to fit in as many guests as possible.

The room had all the amenities one would require with gorgeous products – and for once a nice good size rather than small tubes of shampoo!  The comfy bathrobes and slippers were fantastic to slip into while watching the TV which had a great movie choice and all the channels you could need.

Our room overlooked the courtyard and was fun to see the comings and goings of guests beneath us – I almost felt like a spy!

The location of St Ermin’s Hotel in Westminster, central London, makes it a good base for sightseeing. St. James’s Park underground and Victoria railway station are only a short walk, as are many shops, West End theatres and a collection of London’s major tourist attractions, including Buckingham Palace, the Houses of Parliament and Westminster Abbey.  After a restful sleep we went for a short walk to Buckingham Palace (10-15 minutes) and enjoyed seeing the sites even though the rain decided to make an appearance!

I couldn’t possibly say whether secrets are discussed there anymore, but St Ermin’s is undoubtedly a bit of a secret gem in London!