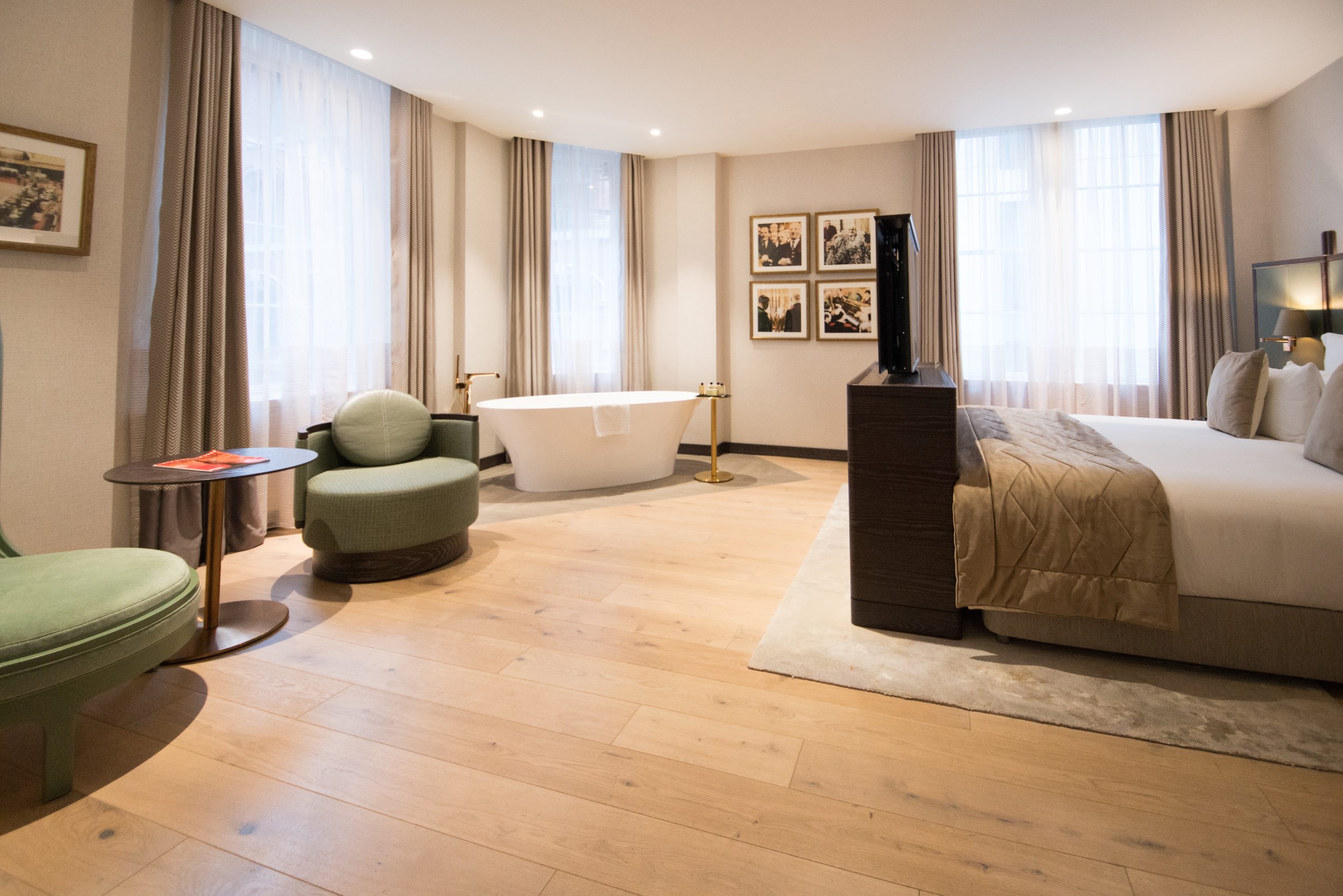 If you’ve been to Manchester in the last 10 years you’ll notice the skyline is always full of cranes, towering skyscrapers and new buildings under construction. In a city where the history and heritage is so important to those who live there, it was wonderful to visit The Stock Exchange Hotel, somewhere that has been lovingly restored for people to enjoy for generations to come.

The Manchester Stock Exchange building was built between 1904 and 1906 and the exchange continued to trade until the year 2000. With a dome shaped trading hall, marble floors, intricate brass and woodwork and colossal columns throughout the ground floor, the building’s interiors were considered too special to remain unseen and unloved by the people of Manchester. So in 2013, ex-Manchester United footballers Gary Neville and Ryan Giggs bought the building and were granted planning permission to transform it into a 35 room boutique hotel.

Since then, every detail has been meticulously considered to create a luxury, boutique accommodation and capture the spirit and heritage of the building. The hotel also benefits from it’s spectacular restaurant, headed by Michelin starred chef Tom Kerridge , The Bull & Bear

Gary Neville said at the hotel’s launch “This space needs to be seen by Mancunians and by others visiting the city of Manchester” so as an honorary Mancunian and lover of all things luxury it was essential that I made a visit.

The Stock Exchange is a few steps from the main shopping street in the city centre, you could not get a better location in terms of being smack bang in the centre of Manchester. When entering the hotel it really is a feast for the eyes as you navigate the change from the concrete streets outside to the marble, gold and dark wood interior of the reception area. I was delighted to be greeted warmly by concierge Jimmy (who was actually an old friend of mine) and we chatted about the building’s heritage in the traders lounge while I enjoyed a glass of Champagne.

The favourite bit of trivia he gave me was that the colour scheme of the interiors is based on the theme of money, and the more I saw of the hotel the more I saw how well this was done with greens, greys and blues an aspect of each and every room.

He also informed me that the hotel had remained open during the first lockdown in order to accommodate those who worked for the NHS and needed to be isolated from their families or needed easier access to and from work. How lovely is that?

The hotel has a collection of forty rooms, signature suites and a stunning top floor residence. I was in a Bradshaw Collection suite which features a king-size bed as well as a walk-in shower, freestanding bathtub and a range of luxurious amenities. The bathroom is a thing of beauty, with old fashioned marble floors, sinks and towel holders blending perfectly with the modern additions.

Although I would have been happy to stay in the suite and order room service it would have been criminal not to visit one of Manchester’s best restaurants on the ground floor, The Bull & Bear  by Tom Kerridge. We decided to have a cocktail in the bar before dinner as I was told it’s a great place to sit and really take in the room. I’d highly recommend the Fair Verona if you like something on the fruity side.

Housed in the former trading floor of the old Stock Exchange, under a magnificent domed ceiling, the restaurant is just absolutely stunning, with original Edwardian stained glass windows and wood panelling matching seamlessly with the giant green leather booths that dominate the space. With the well stocked bar at one end of the room and the open kitchen at the other, the room is focused around a sculpture in the middle which I’m told is called ‘Empty suit’ by Beth Cullen-Kerridge (Tom’s wife) symbolising the struggle of the everyday man against capitalism.

Our hostess shows us to a gorgeous big booth directly facing the open kitchen, perfect for being in the middle of the action and people spotting. But I must mention perhaps the strangest addition to this grand dining room is the amount of TV screens dotted around the room showing various sports channels. I can’t imagine any situation in which I’d want to enjoy a meal and good conversation while my partner is constantly looking over my shoulder at whatever game is on, so although I’m sure it’s intended to provide a pub-like, friendly atmosphere it simply isn’t fitting with the grandeur of the restaurant itself.

The menu celebrates Tom Kerridge’s signature cooking style – British classics prepared with incredible produce, but this menu was actually created by 24 year old Head Chef of the Bull & Bear, Connor Black, who’s worked under Tom since he was 16. There are plenty of tantalising dishes to choose from that you’re almost spoilt for choice. One of the things that impressed me most whilst browsing the menu was the knowledge and helpfulness of the staff. We spoke to at least five servers and bartenders who all recommended their favourite menu items and knew what each element was, even though the menu had only been available for a couple of days. I found that so impressive and a testament to the team at Bull & Bear. I found this out of course because I had to ask what on earth the ‘Kabanos Beer Sticks’ were, to which our waiter quickly replied: “It’s like posh pepperami.”

Fabulous, we’ll take that and some olives.

We both ordered the Roasted Scallops with Crown Prince Pumpkin, Caviar and Butter Sauce. The scallop was one of the tastiest and perfectly cooked I’ve ever had and the whole dish was just so moorish. For my main I thoroughly enjoyed the Short Rib of Yorkshire Beef with Pomme Anna “Reuben” and Mushroom XO Glaze but do be warned this dish is heavy on the gherkin taste, so if that’s not your thing it’s probably not for you. For me however it was absolutely delicious and the beef was just the softest, tastiest most sumptuous meat that I wholeheartedly devoured every last bit. For dessert, a take on Lemon meringue pie, a dome of crisp meringue encased a perfect scoop of blackcurrant sorbet on a bed of lemon curd and buttery pastry which was so good I practically licked that plate clean. I predict great things for Chef Black.

Suitably full we perched ourselves at the bar once again and were treated to sensational cocktails and top banter by barman Joe before waddling off to that big bed to digest and reflect on a lovely evening.

In the morning we ate a proper full English breakfast back in the dining hall, which looks entirely different yet similarly spectacular in the daylight, and admired the green  and gold crockery while enjoying our coffee and freshly squeezed orange juice.

When checking out I was asked by several members of staff how my stay was and it was so wonderful to see how genuinely happy they looked when I gushed about all the wonderful aspects of the hotel. The staff here are a real team, almost family-like. Professional and in keeping with the 5 star surroundings yet completely approachable and helpful in ways that make your stay just that little bit more special. If anything, thoroughly Mancunian, which is exactly why everyone should visit when in Manchester.

To book your stay at the Stock Exchange and dine at the Bull & Bear see online.