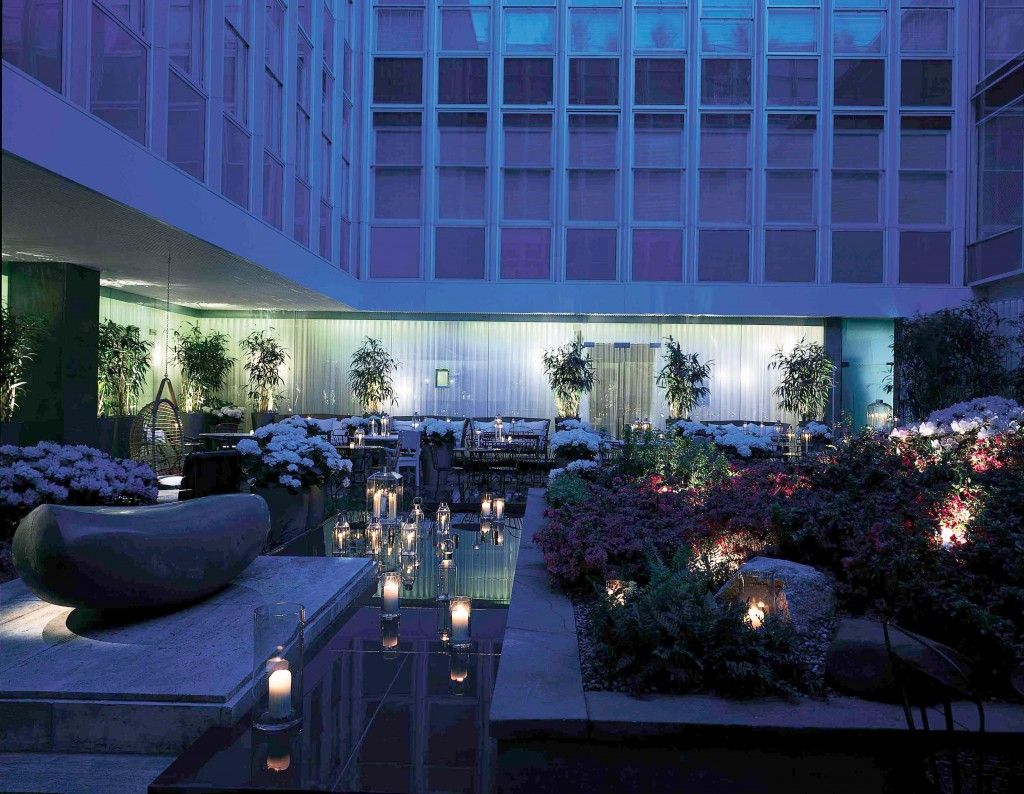 One of the first things I noticed when walking through the main doors of the Sanderson was a white Chanel chainsaw on display in a window. This, along with the house music being played by a DJ coming from The Long Bar and the red lip-shaped sofas in the foyer certainly made one thing blindingly clear – this hotel was unlike any other 5 star hotels. This idea was strengthened as I walked by The Long Bar towards Suka, the clientele were predominantly young, hip & trendy, luckily I was dressed for the occasion so blended right in.

Once at Suka, I was given the choice of eating in the restaurant itself or in the courtyard garden. Despite the blisteringly cold weather on the other side of the hotel walls the courtyard was surprisingly warm. This is owed to a well organised network of patio heaters and marquee-styled roof. This, coupled with aesthetically stunning fountains, blooming trees, reflecting pool and mosaics sets an atmosphere that is more akin to the south of France than Central London.

Once seated, I was asked if I would like a glass of champagne, which is one of two propositions I very rarely turn down. A cheeky glass of Laurent Perrier is not the worst thing to help with the food choice. The concept behind the menu at Suka is Malaysian Street-Food style cuisine with the focus on sharing. So rather than taking a gamble on a dish you are not familiar with or playing it safe and going for the steak, you chose 5 or 6 dishes (between two) and share. Sharing food can really draw two people together at a meal as you are not only sharing food but the experience. Choosing 6 dishes also increases the potential for satisfaction. Normally you have one chance at a main and if it is not to your liking or if you see your dream dish being carried by doves serenaded by a choir of cherubs to a nearby table, it’s bad luck. However, if you don’t like 1 out of 6, chances are some or all of the others will make up for it. True to the form I had experienced so far, all six dishes I tried were delicious. I really wanted to take on as diverse a culinary voyage as possible so I tried no dish of the same animal twice.

Having made our orders, the first dishes to arrive were the Sirloin Beef Satay and the Roast BBQ pork belly with soy. The beef satay was succulent, perfectly cooked (the pinker side of medium rare) and a good start to the meal. The pork belly, however, was something else. I know this meal was for sharing but after one bite I looked over at my date, chopsticks at the ready as if to say “en garde.” I’m not likely to win any awards in fencing but I’m sure I would have at least qualified for the Olympics, such was my efficiency in consuming far more than my share; the tables were turned somewhat when the Fresh Crab Noodles arrived. I am quite proficient at picking up small objects with chopsticks – at prep school, my Thai friends used to train me in proper chopstick use by having me pick up ping pong balls and Malteasers. I failed, unfortunately, to graduate to the noodle class. Despite this the noodles were very good. Sourced daily, the crab was fresh and juicy although my intake was diminished due to my pursuit of keeping an elegant demeanor in front of my date (chasing strings of noodles around the table with my mouth is not the hottest look).

The King prawns were also good but they arrived at the same time as the finest dish of the evening – the crispy squid. Having had my first bite of the crispy squid, my attention made low payments to anything else. Squid has, historically, never been particularly high on my dietary pursuits so if this dish is anything to go by, I think I may have found my new chubby-enhancer. Just superb. This was all washed down with a French Chablis (Domain Hamelin, 2009) and served by an exceptionally friendly and knowledgeable staff. It really was a top show.  The portions, though made for two people, could easily include a third sharer. despite our best efforts, we could not finish any of the dishes.

The best hotels, in my opinion, are the ones that have separate restaurants and bars that function as one entity. This ensures specialisation and the highest quality of their respective duties: this is the case at the Sanderson. Suka provides a place that is perfect for a date, a meal for a group of virtually any size and a quick cocktail with portions that can pose as bar snacks. Suka really does cater for any situation and it’s varied menu ensures you will not be found wanting.

We’ve got a brand new look! Today we relaunched

Soaring temperatures yesterday reminded us of the