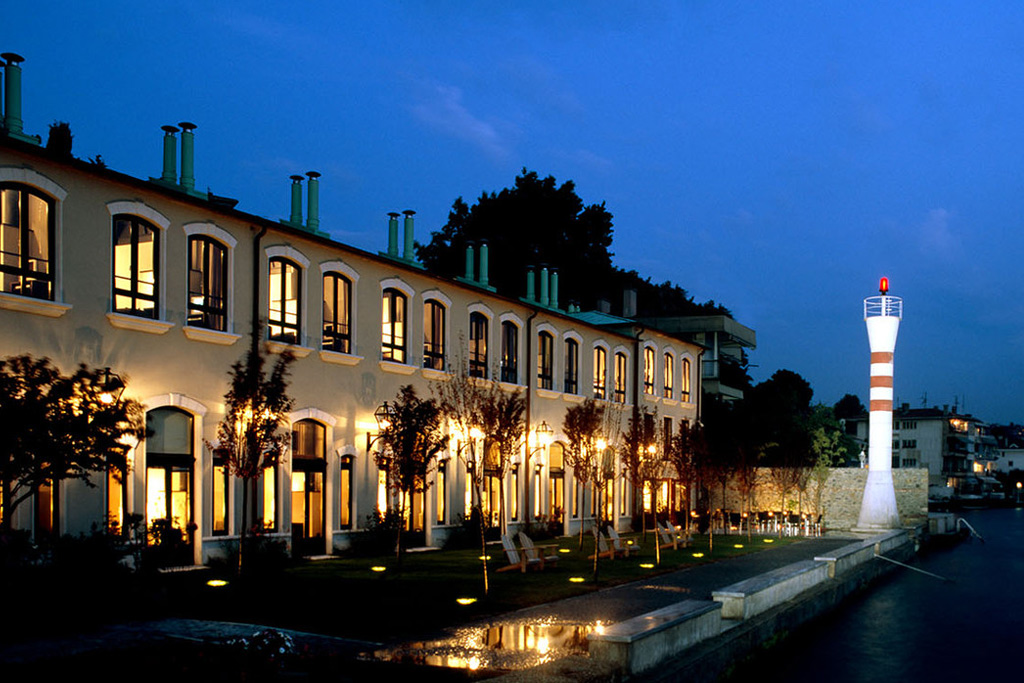 As I walked past Istanbul Modern on my way to Kabatas Ferry Port, the buildings that line Meclis-I Mebusan Caddesi were bathed in Turkish winter sunshine. Having arrived ten minutes before my collection time, I bought a simit and perched on the stone steps leading down to the water for a contemplative moment. As I nibbled on my simit – a ubiquitous Turkish breadsnack, perhaps the simplest and finest street food I have ever encountered – I watched the jellyfish bobbing along the edge of the water and felt my whole being start to melt into delicious relaxation in anticipation of the peace of the open water and the hamam treatment to come. Sumahan’s private launch appeared from behind a large public ferry boat and I was whisked swiftly away from the busy port, out onto the Bosphorus strait and bound for Asia. Alone on the boat aside from its captain, I settled myself on the rear outer deck to delight in the glimmering Bosphorus waters and admire the Dolmabahce Palace, standing majestic on the shore.

My morning appointment was at The Wellness Centre at Sumahan on the Water, an exclusive boutique hotel on the Asian waterside, built into a former distillery. Alighting on their private jetty, I was courteously ushered to the tranquil basement level, where the lift opened directly into the spa area. The Wellness Centre offers a variety of treatments and massages, and I was to experience their private hamam, a true Turkish classic.

The tradition of the Turkish bath, also known as hamam or hammam, dates back many generations. It was adopted from the Romans and Byzantines, perfected by the Seljuk and Ottoman Turks, and continues widespread in the present day. At the height of the Ottoman Empire, every neighborhood of Istanbul had a hamam with hot and cold baths, fountains, and domed marble rooms. Even now, most Turks will indulge in a full hamam treatment at least once a month.

Having deposited my clothing and accoutrements in the preparatory changing room, I was led into the hamam wearing nothing but a pestemal – a thin traditional cotton towel.

The traditional wooden clogs have been swapped for disposable hotel slippers, but a wonderful display of old clogs on the way into the hamam gave a nostalgic nod to that bygone custom. Sumahan’s private hamam is made of Marmara marble, and has a traditional domed ceiling which allows daylight to filter in through inlaid glass skylights; an aesthetic and sensory pleasure not entirely uncommon in public hamams, but a truly decadent treat when one is the sole beneficiary of the space.

I lay down on the göbektaşı (belly stone) – the round central platform within the hamam. Asuman, the hamam mistress, turned on the taps and as one of the large marble sinks began to fill I was left to lounge on the heated marble slab. With the sound of the running water, and the heat of the stone, my body at once started to relax. When she returned, Asuman sat me up, and with a copper bowl poured water over my body. After a moment I became accustomed to the heat, was released from my wet towel and asked to lie down on the marble slab – another towel now draped strategically for modesty.

More warm water was poured over me and then the kese, or exfoliating mitten, was applied and so began the famed exfoliation. It certainly wasn’t rough – I have experienced hamam treatments that verge on the torturous – but I knew it was doing the job without leaving my skin raw and screaming.

Lying on my back with my eyes shut I could feel a light tickling sensation, and lazily raising my head I saw that I was being enveloped with a coat of soap bubbles. Asuman was expertly muddling a cloth in a decorative bowl of soapy water and then opening up the hollow cloth, allowing it to fill with air. The cloth was then squeezed, the escaping air producing huge swathes of soapy white fluff.

I was massaged and washed by hand, then rinsed once again before my hair was washed. There is something so decadent and child-like about being washed. My hair was conditioned and rinsed, and I was given a final hot water dousing then wrapped in a cotton waffle gown.

I went to lie in the sogukluk, the cooling-off section, and lounged awhile nibbling dried apricots and hazelnuts, sipping mint water and Turkish tea.

The experience was one of the most enjoyable that I have had in Istanbul thus far. The tradition of hamam is rooted deep in Turkey’s history and it has a wonderful timeless quality. The ritual has been maintained down the years; had I walked out of a hamam in an Ottoman mansion even centuries earlier, I would have had a virtually identical experience.

After dressing myself slowly, savouring the freshness of my skin and the fluidity of my every muscle, I sat once more in the sun beside the Bosphorus to enjoy a coffee as I awaited the launch that would return me to the European shores of the city. Little boats and jellyfish bobbed along before me and I drifted off into a pleasant reverie. I couldn’t imagine wanting to be anywhere else in the world.

Yoga in the Brighton i360