The ESCAPE at Four Seasons Hampshire 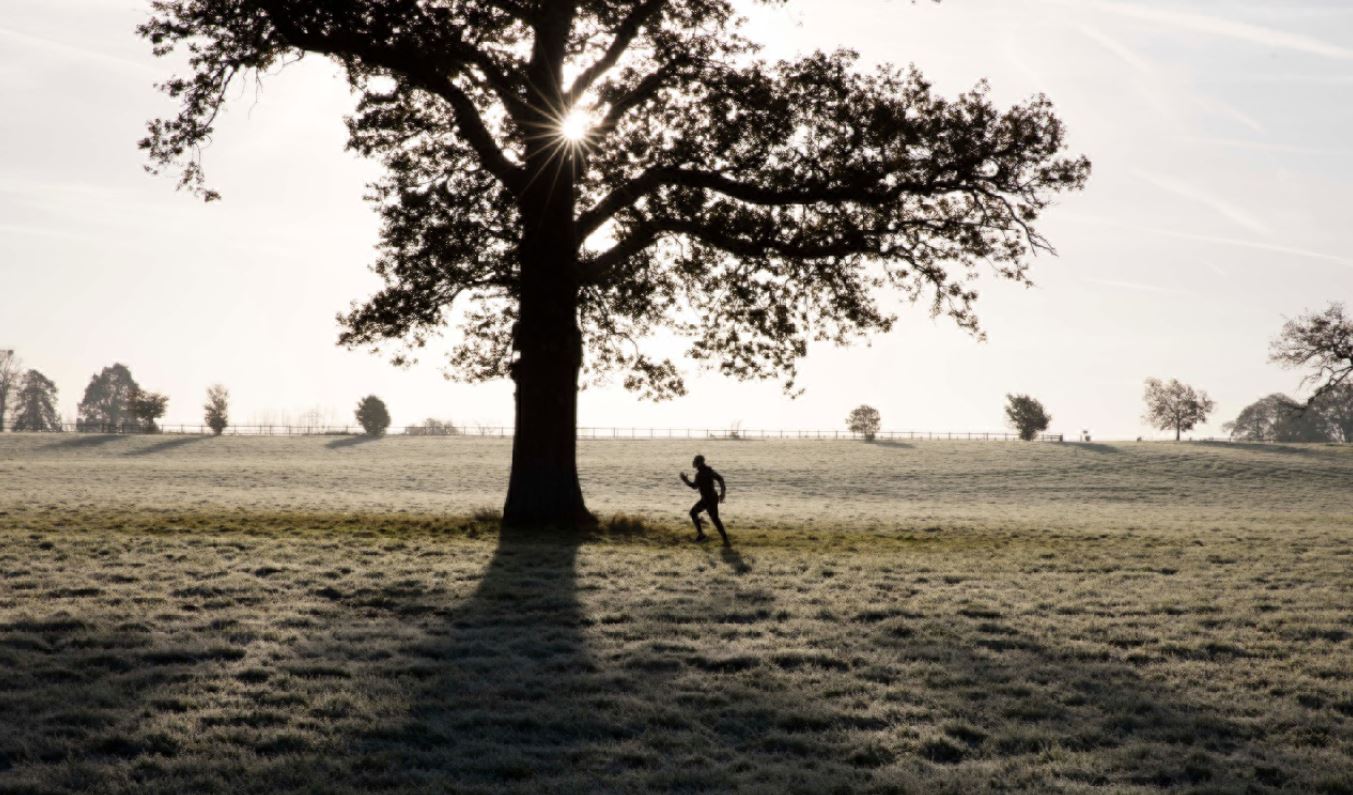 When you think of Four Seasons Hampshire you think of a country estate hidden away in 500 acres of lush English woodland. The 18th-century Georgian manor house with period-style additional wings is synonymous with a weekend getaway; what with their spa, countryside pursuits including horse riding and clay pigeon shooting and Sunday lunch at the Wild Carrot. However, 2019 sees Four Seasons Hampshire shaking things up by breaking the tranquil silence of the English countryside with grunts, groans and military style drills; meet The ESCAPE.

On a lazy Saturday morning Eisbär and I took a drive from Surrey to Hampshire to check into this luxury country estate. Having visited the Four Seasons Hampshire before I was thoroughly excited to be checking into this iconic hotel, however this time I may have underestimated what I had let myself in for! After driving up the long drive to the front of the hotel we were warmly greeted by the Dorman who labelled our bags and assorted us to the front desk to begin the process of check in. Our room was located on the second floor of the main building up an ornate staircase underneath a beautiful glass dome. The room was well appointed with a large bedroom overlooking the estate, a walk-in dressing room and an impressive bathroom with freestanding bath and separate shower. Waiting for us was a beautiful gift of two reusable water bottles, which we would later find very handy!

After a quick unpack we headed down to the Wild Carrot restaurant for lunch. Our lunch was to be a light healthy affair considering the afternoon was filled to the brim with exercise. Paolo Belloni, the Executive Chef, who has been with the Four Seasons since 1997 starting his career at Four Seasons Hotel Milano, greeted us. Paolo believes that the dishes should be kept simple so the lunch he created for us were exactly that; he let the provenance and the freshness of the ingredients do all the talking. We started with a mocktail, the Pineapple Express, containing pineapple, lemon and orange plus we asked for added ginger that really lifted this drink. Starters consisted of Loch Duart cured salmon with bergamot gel, baby spinach, crispy leaks and Parmesan; this dish was light, perfectly seasoned and unbelievably fresh. The for main dish we had seabass with Dashi consommé, which was made in-house, seaweed and ginger; this dish too was incredibly light but packed with flavour. We finished out lunch with fresh sorbet before heading to the library to meet the team behind The ESCAPE.

We were lucky enough to meet the faces behind the ESCAPE, including Joshua, ex United States Army Special Forces, Ross, multi award winning bodybuilder and Ricardo, a competing cross-fit and spin instructor. Thinking about who designed this package you might think, “It’s not for me”; I certainly took one look at these three and though, Christ what have I done, and I am a relatively fit person! But after speaking to them you can see that years of personal development and work within the fitness industry has perfected their ability to work with all individuals, no matter what the fitness level, age or ability. They explained to Eisbär and I that the aim of The ESCAPE is to take its passengers way past their comfort zone and force them into the unknown, something that was definitely put to the test later that day!

After leaving the library we both donned our training gear, after being told to dress for the outside, then we made our way to the Spa. If only we were actually heading into the spa for a massage and a general pampering; but no sooner had we arrived we were jogging at a gentle pace away from the spa towards the tennis courts. After a very short briefing it was time for a warm up; this was not your average warm up with general mobility of joints and slight warming of the system but rather a mini training session in itself with the likes of burpees, press ups, bear crawls and squats. By the time we had warmed-up we were overheating and stripping layers off. The group was made up of various types, builds, levels of fitness and somehow an equal mix of men and women; as we jogged out of the tennis court and through the idyllic forest of the Four Seasons one of the girls asked Eisbär why he thought the weekend was called ‘The ESCAPE’ to which he answered perhaps it gets so tough that escaping is all one can think about! As a group we left the forest and jogged uphill through a field only to stop for the next section of the course. The views across the rolling field towards the lake and onto the beautiful hotel were quite breath-taking, but not quite as breath-taking as the next stage of the boot camp.

Joshua, our all american ex-special services boot camp leader, had us pushing our bodies beyond the pain barrier and into the unknown, with hundreds of squats variations, push up holds and general rolling around on the ground; this was simple but honest military style training. Eisbär and I were certainly beginning to feel our quads. After some exhaustive moves here it was off to the lake where a 300 metre course lay waiting. With two simple moves, lunges and crab walks we had to travel there and back again; by the time we returned to the starting point our legs and butts were feeling very strange. It was at this point that I realised that I should be proud that I had made it this far considering my previous ACL knee injury and surgery, I was jogging, lunging and squatting and my knee was keeping up. Next up we had to bear crawl up the hill run, around and back down then do it all over again. This reminded me why Eisbär is called Eisbär (Polar Bear in German) for he seemed to fly up the hill running like a bear on all fours. Now our upper bodies had joined the party, it was time to jog back to the spa with sand bags over our shoulders. Oh to return to the spa… but we slipped straight past to a little training ground that had been set up for us in true circuit style. It was now time to dig deep and push through the exhaustion as we set about various HIIT exercises from kettlebell swings and lunges, hovering squats to hugging water laden Jerry cans whilst walking around all accompanied by pumping Dubstep music to help push us through to the end. By the time the session finished Eisbär and I were ready to crawl back to our rooms and collapse with exhaustion but glowing with a sense of achievement we promptly ordered scones and tea knowing we had more than earned it!

For our evening session we were told to dress for outdoor night time activities and to be prepared for the unexpected; should we be frightened? Once at the spa we started with a 10 minute meditation to rest one’s minds and generally prepare us for what was to come. The whole group were given head torches and out into the dark we ventured. Of course if I told you what happened next then I would have to kill you, for this information is on a need to know basis and the only way to find out is to attend one of the Four Season Hampshire’s ESCAPE weekends and discover what you are actually capable of and how far you can go.

What a day – we had been pushed to our mental and physical boundaries and had both had the opportunity to do something we never thought we could do, and what a feeling of achievement that was! After a quick turn around, suited and booted we hit up Wild Carrot for a well-earned supper. Starting at the bar with a Margarita and a G&T we chatted over our day at The ESCAPE realising how well we had done and actually how much fun we had! Who knew such physical exertion could be exciting? We took our table and ordered some incredible dishes including the Bone Marrow risotto, seared king scallops, braised veal cheek and the roast duck all matched perfectly by Boris and Tom with a selection of new and old world wines. Weirdly by dessert we were both done in, the exhaustion of the day had caught up with us so we bid our farewells and headed to bed. Drifting off to the land of nod both of us had an overwhelming sense of achievement; despite the aches, pains, scrapped knees and elbows, it was ALL worth it!

The next day we were thrilled not to be “dropping and giving 20” but instead heading to the expansive spa for some much needed pampering. After a light breakfast from the breakfast buffet we both checked in for our NEOM De-stress Massage, which allows tension to drift away for a calm and new you. After choosing your light mode in the massage room you are transported to nirvana as you are pulled, stretched and massaged all using British brand NEOM products. I was so impressed with this treatment, it was one of the best massages I have had, and boy have I had a few in my time! It was the perfect way to ease the aches and pains of my battered body after its experiences of The ESCAPE. After blobbing about in the pool, checking out the sauna and steam it was almost time to leave, but not before some fine country Sunday lunch. Served every Sunday 12.30pm – 3.30pm the Four Seasons Hampshire put on a Sunday spread to beat all Sunday spreads. The Farmers Market Buffet at the wild Carrot is a smorgasbord of local culinary delights from cold cuts, to fresh salads, a traditional Sunday roast to vegetarian curry and all washed down with Louis Roederer champagne. Totally worth the visit alone!

The ESCAPE really did what it said on the tin – it pushed Eisbär and I to our limits but all in the gorgeous surroundings of the Hampshire countryside. In this day and age where we are glued to our phones and laptops it’s a real breath of fresh air to get back to nature and digital detox and where better than Four Seasons Hampshire. With expert trainers, an expansive spa, incredibly fresh food and beautifully appointed rooms I could not think of anywhere else I’d rather sweat it out. Looking to challenge your perceptions? Book your ESCAPE now!

The Escape will take place Friday, June 14 – Sunday, June 16, 2019, and will include up to 12 hours of training, 3 hours of spa treatments, breakfasts, healthy lunches and dinners, use of the spa facilities and two nights’ accommodation.