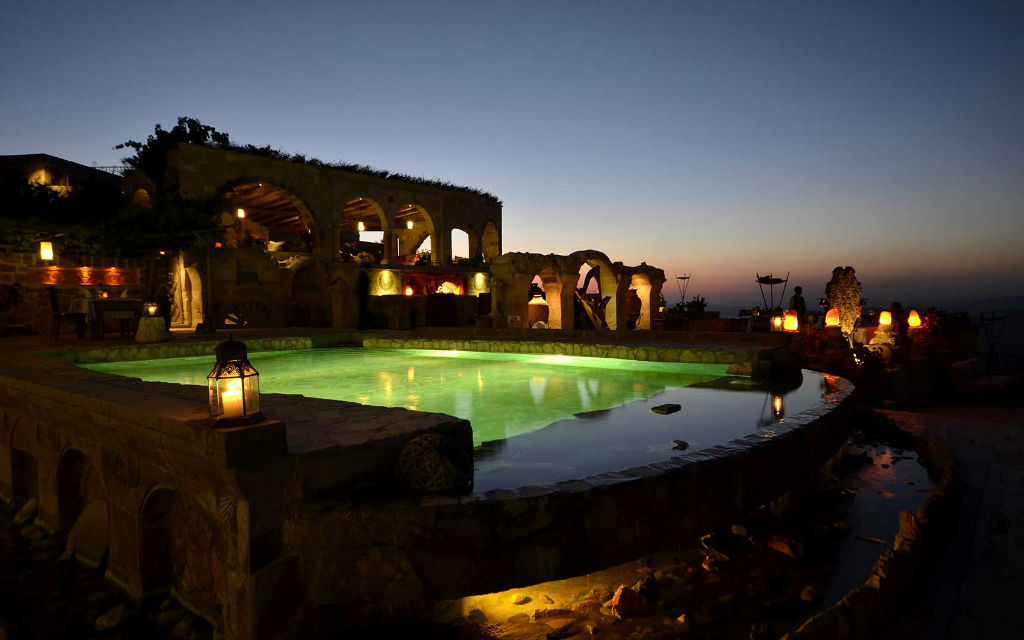 The Turkish winter, such as it was, had passed; and spring had arrived in Istanbul, along with the sumptuous displays of the annual tulip festival.  Having spent seven months in Turkey, vigorously exploring its biggest city yet never venturing beyond, I had started to feel an urge to explore other parts of this vast and varied country.  Everyone from whom I sought advice assured me that Cappadocia is a must-see. Whilst this naturally piqued my interest no end, it also engendered a measure of unease; after all, can something that is so universally praised ever live up to one’s expectations?

Tall, Dark and Handsome and I landed in Nevşehir in central Turkey, after an unnecessarily tense departure for which I must take full responsibility.  Our flight was to depart from Sabiha Gökçen, the airport on the Asian side of Istanbul.  We left home in good time, arrived at the airport by taxi and passed through the airport entrance security without a hitch.  At the second security waypoint to go airside we presented our boarding cards as requested, whereupon we were politely informed that our flight was from Ataturk airport; which is not only on the other side of the city but indeed on another continent entirely.  We swiftly made an about turn and instructed a second taxi driver to whisk us post-haste back to Europe.  The two Istanbul airports are a good 70km apart (bear in mind that Gatwick and Heathrow are separated by a piffling 35km), and a slight sense of dread descended upon me as I contemplated the possible further delays – Istanbul’s traffic being some of the worst in the world. By some miracle, or at least some terrifying hard shoulder driving and lots of nippy manoeuvres, we found ourselves airside at Ataturk Airport with a leisurely 25 minutes to spare, and I enjoyed my first ever breakfast beer with TDH, who had remained utterly unfazed throughout.

The afternoon warmth embraced us as we descended from the plane at Nevşehir, a good few notches warmer than Istanbul, and we proceeded through the bijou (not to say miniscule) airport.  Our car transfer was provided by Matiana, and our immaculately dressed driver drove us in style to The Museum Hotel in Uçhisar. The historical Cappadocian Region, located in Central Anatolia, is a designated National Park and UNICEF World Heritage Site.  The landscape is made up of valleys and distinctive rock formations created by volcanic eruptions and eroding rains and winds over thousands of years.  When the area was inhabited, dwellings were carved in the rock itself and whole cities dug out underground.

The weather was closing in as we arrived and sporadic but heavy drops of rain had begun to fall.  A quick tour of the hotel was quite thrilling.  It is made up of only 30 rooms but is a veritable labyrinth of cave tunnels and low buildings. Our tour took in the bar, pool area, breakfast room, restaurant and treatment room with twin massage beds overlooking the vast expanse of the Cappadocian landscape.  We were accompanied throughout the tour by Joe, the hotel’s beautiful four-year-old German Shepherd, who captured TDH’s heart and indeed my own.

The hotel is awash with artefacts.  It is an officially registered museum and fine examples of antique rugs, kilims, ceramics, heavy felt artwork, intricate traditional clothing, helmets, jewellery, ancient wooden sledges and stone carvings can be found throughout.  The hotel’s founder, Ömer Tosun, is a passionate antiques collector with a wide collection of pieces from the Ottoman, Seljuk, Roman, and Hittite periods.  The hotel is a living museum nestled on the hillside with Uçhisar Castle rising behind it.  The hotel’s location and beauty is quite unique, and it is the only hotel in Turkey within the Relais & Châteaux family. They are currently building five more rooms which, we were told, will have private thermal pools – I can’t think of anything more delightful.

Our room for the first night was the opulent Kubbeli Suite, taking its name from the customized dome ceiling in the bathroom. The room is Ottoman in style and very spacious – plenty of room for me to run excitedly in circles at the prospect of the weekend ahead. The balcony has a breathtaking view of the landscape, as indeed does the Jacuzzi, set in front of the bathroom windows.  The bathroom also boasted a double shower and acres of space.  We filled the tub with salts and bubbles, and enjoyed a bottle of red wine along with some dried fruit and nuts as a pre-prandial treat.

On both nights we had dinner in the hotel restaurant, Lil’a, and felt absolutely no desire or curiosity to try anywhere else (look out for my separate restaurant review on The Bespoke Black Book soon!).

Breakfast was a real delight.  Buffet-style, there was also the option to have a traditional flat bread rolled and cooked to order, an amiable egg man to take care of our omelette needs, fruits, pancakes and the customary Turkish breakfast staples of cheeses, olives, yogurts etc; all immaculately laid out on top of glass cabinets displaying traditional Turkish treasures.  After we’d finished one excellent evening meal, TDH remarked how much he was already looking forward to breakfast the following day!

The first morning after breakfast, I looked across the valley from the poolside terrace to Mount Erciyes, towering above the relatively smooth horizon.  Capped with snow but bathed in sunshine, it is one of Turkey’s prime ski resorts, and somewhere that I’d be eager to visit next season. TDH is very keen for a snow-based trip and I imagine that Cappadocia under snow would take on a surreal, Narnia-esque quality.

The staff were a true delight. They had excellent English and were willing, and seemingly delighted, to spend time tutoring us in Turkish as well; helping us perfect our grammar, teaching us new words and praising us enthusiastically.  I could, and probably should, name-check everyone we met, but suffice it to say that there was not a single dud amongst this exemplary array of hospitality experts.  Special mention, however, must go to Orhan, the hotel’s manager.  You’d struggle to find a more charming man (TDH aside, of course).  He is a credit to the hotel, and his relaxed manner made us feel straight away at ease and welcome.  Having initially opted for a career in interior design, he moved into the hotel industry and then found the Museum Hotel – a perfect marriage of the two.  He is a paragon of informative, friendly service, and would be well worth the expense of cloning.

Also unstintingly professional, TDH was temporarily locked away writing some terribly important business report; and I found myself lounging in an orange bikini and matching headscarf upon the white cushions of the terrace, and listening to the water from the Roman-style infinity pool, whilst watching the doves busying themselves in their elevated wooden house, surrounded by peaceful serenity.  The waiter asked if I was cold; “Not at all, it’s lovely!” I beamed from beneath a layer of factor 30. “I need a jumper”, he replied with honesty.  I may have gypsy blood, but I am truly British!

Our second night was spent in the Ebruli Suite, typically the preserve of honeymooners, with whom the hotel is understandably very popular.  The name means variously coloured, and the suite displays splendid hues within both the marblework and the natural colour gradations of the cave lining.  From the private garden, complete with swinging love seat, you enter sitting room of the split-level natural cave room, stuffed with Ottoman ornaments and a beautiful writing desk.  Down a slight marble incline was the bathroom with another double rain shower set in back-lit honey-coloured marble of unique workmanship – truly amazing.  A Jacuzzi tub with a picture window overlooking the landscape from inside the natural cave interior made the room complete – and what a room!

Stone steps, warm underfoot, curved tantalizingly up to the next level. The bed was set against roughly-hewn stone with another lovely window giving onto views of the treetops in the private garden and the expanse of the valley beyond.  A large wooden wardrobe and full-length mirror also adorned the space, making it feel very homely and not at all hotel-like. The ceiling was of woven rushes, giving the room a rural beach hut feeling. The bed itself had the best mattress I have ever slept on, bar our own exorbitantly expensive and incredible snug cloud back in the UK.  The pillow was sublime, and as I drowsily came round in the morning and registered how comfortable my neck was, I had a semi-lucid debate with myself as to whether I could get it into my hand luggage so that we should never be parted again.  I know this seems such a dull point upon which to focus in such a romantic setting, but it’s so crucial when staying in any hotel. The beds can be, and usually are, such a let-down.  You can rest assured of peaceful rest at The Museum Hotel!

The room has magnificent views of Pigeon Valley, White Valley, Red Valley and Göreme; and I woke early in the morning to find the vista filled with hot air balloons in varying stages of ascent.  I opened wide the curtains and idly popped a capsule into the inviting Nespresso contraption; and whilst a Colombian brew was preparing itself, I gazed upon a man ploughing the field below the hotel using a horse-drawn hand plough.  I clambered back into bed to enjoy the morning light and the sound of the sparrows talking outside; and sipped my fresh coffee whilst stroking TDH’s sleeping head.  Life doesn’t get any better.