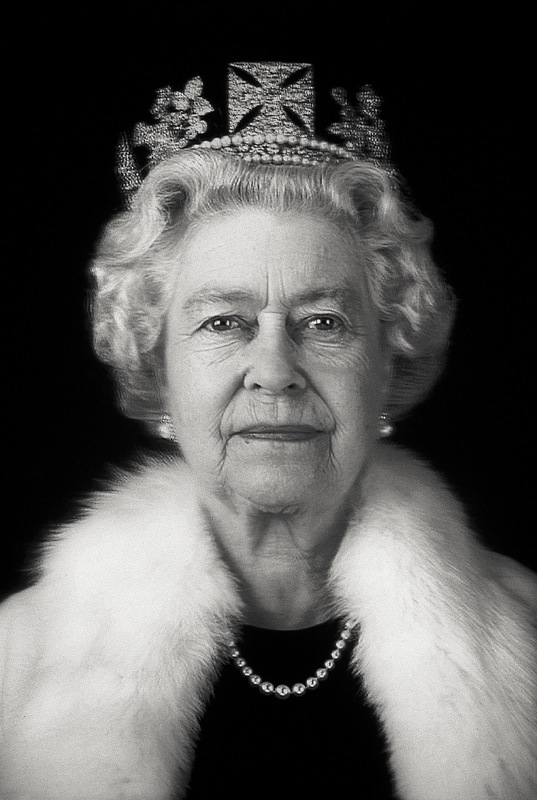 To mark the Diamond Jubilee, The National Portrait Gallery is staging an exhibition of images of Queen Elizabeth II throughout her sixty year reign.  The portraits have been chosen by Paul Moorhouse, the Curator of Twentieth Century Portraits, and without reference to Buckingham Palace.  As a result there are some surprising inclusions, with images by Gilbert & George, Andy Warhol, and Gerhard Richter nestled amongst the more traditional portraits by Beaton, and Annigoni.

There are also rare unguarded moments, such as the snapshot take on the morning of the fire at Windsor Castle – one of a series of events which marked the Queen’s ‘annus horriblis’, in the fortieth year of her reign.  As a result, the exhibition can be read on many levels – from the changes in fashion to attitudes about the upper classes – the show is as much about charting changes in society over the last sixty years, as about visual appropriations of the Queen.

Included, for example, is the Sex Pistols cover of God Save the Queen in 1977, marking the Queen’s silver jubilee.  Highly contentious as the time, the song was banned from many radio stations, and marks a very specific moment in punk rock history.  Now some 35 years later, the cover is part of the mainstream lexicon of Elizabeth II’s imagery and is no more offensive that the other portraits on show.

More revolutionarily is the first lenticular portrait of the Queen Elizabeth, Equanimity, generated from over 10,000 still shots.  Surprisingly, the portraits remains somehow static, despite the Queen following us around the room.  Created by Chris Levine (artist) and Rob Munday (the holographer), Equanimity has now been gifted to the National Portrait gallery.  More revealing perhaps is Levine’s Lightness of Being, which shows Elizabeth with her eyes closed.  This portrait shows a more vulnerable queen, and says something about Elizabeth’s age.  Despite the regal attire, somehow Elizabeth is more fragile than the iconography.

Another unconventional portrait is Elizabeth and Philip Potent, created by Gilbert and George in 1981.  Using postcards of Elizabeth and the Duke of Edinburgh, the pair have managed to create apotent cross.  More commonly found in heraldry, the term potent allows them to comment in a very playful and sophisticated way about the iconography and status of the royal family.  In the show is also Gilbert and George’s postcard collage Coronation Cross, also from their 1981 Crusade exhibition.  Crusade was intended to bring together art and a sense of national identity.  The royal family was seen as very much central to that sense of nationhood.

This exhibition isn’t going to appeal to everyone, but if you read it as a social commentary I think it’s perhaps rather revealing.  Pictures intended to shock seem somehow more commonplace when set against countless other portraits.  I found myself more surprised by the intensity and size of Freud’s tiny portrait than that of the endlessly reproduced Sex Pistol’s cover.  I couldn’t help thinking about Queen Elizabeth’s namesake too, Queen Elizabeth I.  Elizabeth I’s iconography was set out specifically to create and image of a strong queen, a goddess, a virgin, a ruler of lands, and we can see parallels with the early portraits of Elizabeth II.

However, as technology has progressed, we are presented with an unprecedented number of pictures of the Queen on a near daily basis.  The iconography of Elizabeth II still stands in those seminal portraits by Dorothy Wilding and the like in the show, but it’s actually those unguarded moments, like the morning of the Windsor Castle fire, which speak more loudly.  In these unguarded moments, we see the vulnerability of the Queen, and ironically, it is where we identify with her that we perhaps gain a better understanding of her.  Looking at each portrait as a tiny moment in time will offer a better reading of the exhibition, than trying to absorb the iconography as a whole.