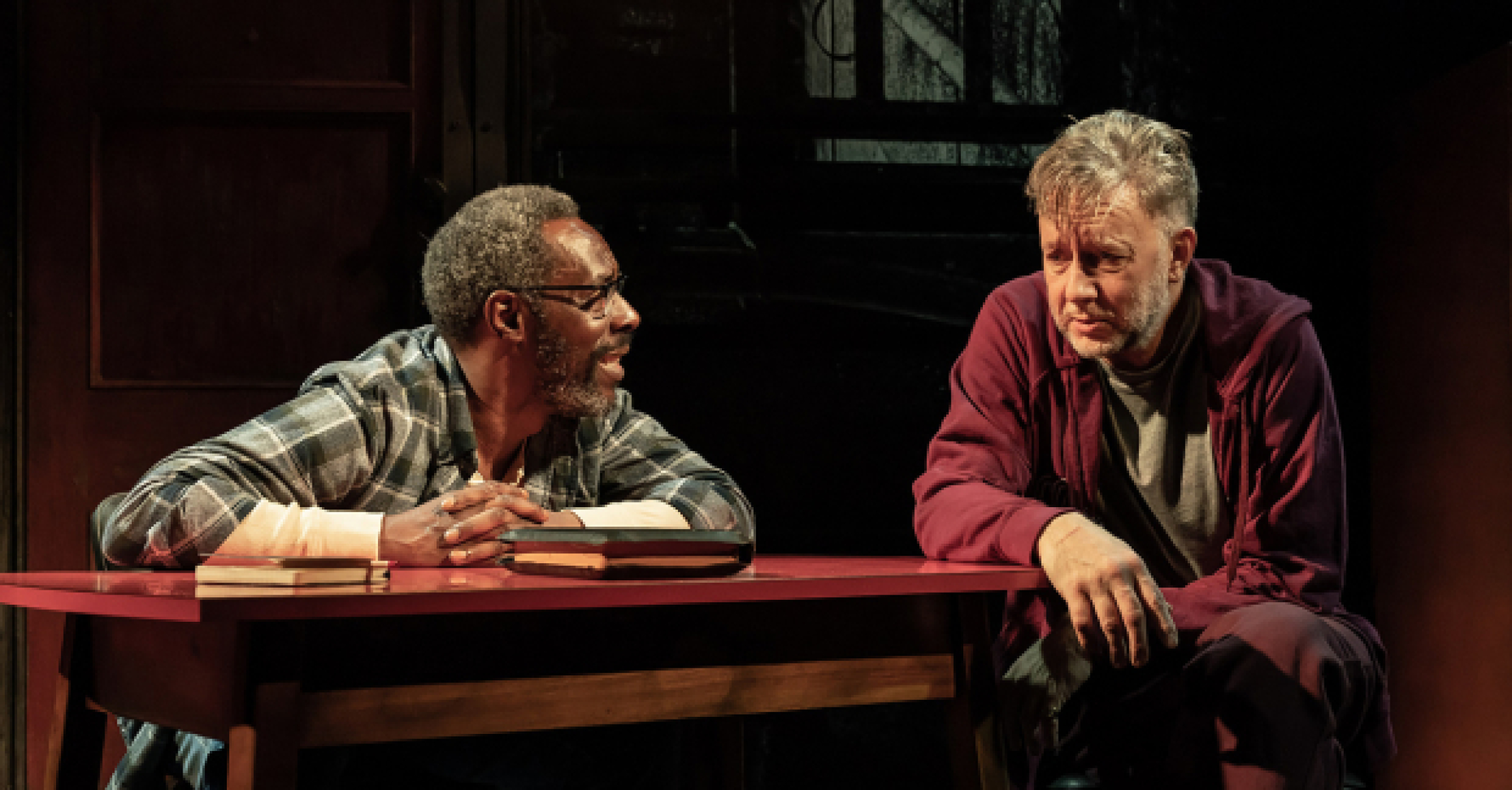 Having opened late last year with Dave Malloy’s supernatural song cycle Ghost Quartet, Soho’s tiny theatrical jewel box, the Boulevard, continues its’ policy of defiantly left-field programming with this UK premiere of Pulitzer Prize-winning author Cormac McCarthy’s challenging talk-piece: The Sunset Limited. First seen in Chicago in 2006 and subsequently turned into a film with Samuel L Jackson and Tommy Lee Jones the piece has come to London for an “off West End run”.

This two-hander follows the moments after a depressed professor has tried to throw himself under the wheels of a train. The man who saved him, named Black (Gary Beadle) is an ex-murderer who found God in jail. His challenge is to save White (Jasper Britton), the second time.

One of only two plays written by the American novelist Cormac McCarthy (who won the Pulitzer prize for his 2006 book The Road), has been described as “America’s greatest living writer”. McCarthy, is a master of spare prose. There’s nothing baggy or extraneous here, no scene changes or multiple characters, just Black’s decrepit tower block flat and the muffled sound effects of neighbours living too close for comfort. In this stuffy space neither can escape from their conversation which meanders — amusingly, philosophically, but always with the threat of White’s exit and his second suicide attempt.

Gary Beadle and Jasper Britton put in masterful performances and there is a real chemistry between them as they eke out the humour in their lines. Britton exudes moroseness and dry wit while Beadle is charismatic, with a rhythm to his delivery of the words. The play is slow, but the two actors are excellent.

Terry Johnson directs, and keeps the pair mainly at the table as they trade their versions of the world. Refreshingly, there’s no shouting and in the tight auditorium of the Boulevard Theatre the conversation feels intimate and close at hand. Tim Shortall’s set, a tiny New York apartment, is filled with red-browns and burgundies, and these colours extend to the tracksuit that White wears. In these red hues the two men seem cocooned in an endless dusk, far from the rest of the world.

The lengthy anecdotes and monologues as each character propounds his viewpoint are beautifully written, but collectively have a slightly deadening effect, as though one should be reading them rather than listening to them in a theatre. The end left me wanting more than a battle of philosophies it didn’t really lead to the dramatic ending I was unknowingly craving, but is a showcase for the two brilliant actors.