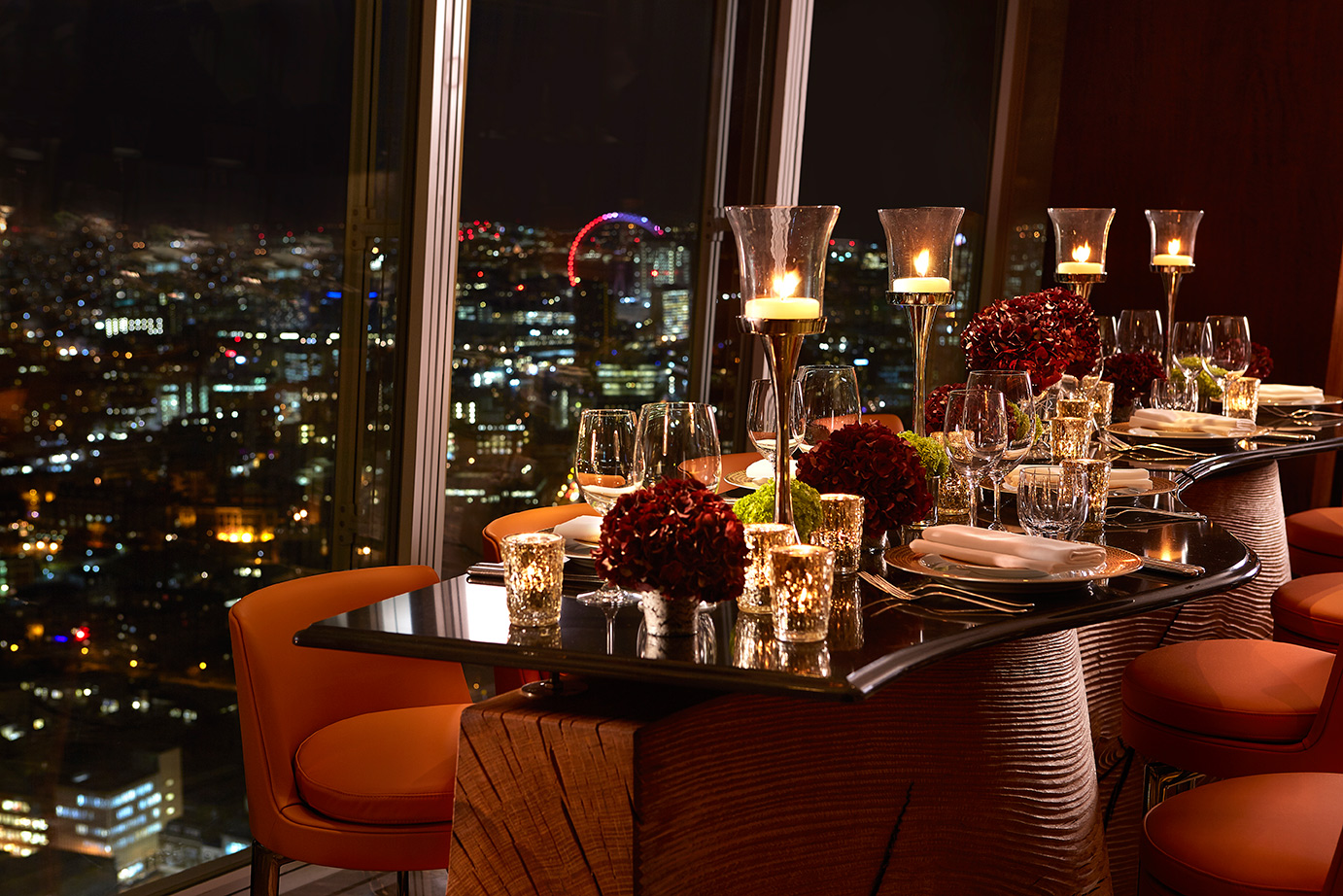 It was Eisbär and my Anniversary and what better way to celebrate than 128 meters above the city discovering new dimensions to London’s dining scene. Having already checked in to Shangri-La Hotel At The Shard London and pampered ourselves in our suite we headed to dinner at TĪNG, a vibrant space with 360-degree views across the capital located on the lobby floor of the hotel.

The space captures the aura of Chinese culture in an elegant and modern interpretation with seasonal menus made using the freshest produce from nearby food markets. Upon entering the space the panoramic 360 views are immediately apparent with diners rushing to the windows to look at the view (myself included) before taking their tables to sample the delights TĪNG has in store. Eisbär and I had a beautiful and roomy table for two overlooking the City and down the meandering Thames to Canary Wharf and beyond, which looked magical in the autumn twilight. Hannah, the Head Hostess, bought us our menus and then started our meal with a glass of Duval Leroy Brut Rose champagne, a thoroughly delicious start to the evening.

After nibbling on some gluten free bread, Eisbär and I started with Prawn Carpaccio and Risotto with Black Pudding. Eisbär’s Prawn Carpaccio was delicate and soft, easily tearing with a fork, the blue marbling through the shellfish was visually pleasing and the taste was subtle with sweet pickled mushrooms and creamy avocado, the perfect clean and not too heavy start to a meal. My risotto was a true taste of Italy with tomato and basil; the dish was hearty and warm with the rice cooked al dente so as to add texture to the dish. For mains I opted for the lobster while Eisbär, the eternal caveman, went for the venison. My lobster was meaty, succulent and sweet with creamy squash that was slightly spiced, delicate celeriac and the cutest baby carrots I have ever seen! As a lover of shellfish this dish was spot on! Eisbär’s venison was just what the Neanderthal ordered, served pink it was juicy with earthy mushrooms on the side and a bloody jus; the best of the forest on a plate.

Up next was the obligatory cheese course, as for Eisbär and I cheese is the food of love, not chocolate, for what is better than stinky, oozy or creamy cheese?!? We shared a cheese plate of British cheeses with toasted gluten free bread washed down with an amazing Taylor’s 10 year old Tawny Port which went particularly well with the blue smoky cheese cutting through the saltiness with the sweet berry tones of this fortified wine. After cheese utopia we finished with dessert, sharing a chocolate black forest, a rich, dark, thick, sexy dessert. A dense dessert that is not for the faint hearted with black cherries and raspberry sorbet; sinful seduction coated in chocolate, the only sensible way to end an anniversary meal.

We took our nightcap, of Espresso Martinis of course, in GŎNG, which is located on Level 52, offering even more breathtaking views of London. The bar derives its name from ‘dougong’, a unique structural element of interlocking wooden brackets that is used in traditional Chinese architecture and as such is also featured in the bar. The bars modern Asian design is inspired by the mythical aspect of cinnabar, a mineral that has been used historically to create the ‘dragon red’ found in the walls of Chinese Imperial Palaces. The dramatic backdrop of London’s skyline plus the sexy mystical interior makes GŎNG the perfect place for late-night drinks with ones loved one. It is important to know however the bar does not take bookings (because its so popular) on weekends BUT they give priority for a table to hotel guests, so if you are not staying prepare for a wait, especially at sunset!

After a few cocktails we headed back to our suite. Lavishly sated having dined on lobster, venison, cheese and chocolate we had indeed celebrated our anniversary in style. Being Londoners that had meet in London is was a unique and romantic way to celebrate overlooking the city, a city we not only called home but also had to thank for brining us together. If you are looking for the perfect venue to wow, woo or just wander then I could not think of anywhere more ideal than where you can dine among the stars up at TĪNG at Shangri-La London.

Independent and unbiased online luxury lifestyle magazine.
For us luxury is about the experience, not the price tag.
📩[email protected]kbook.com