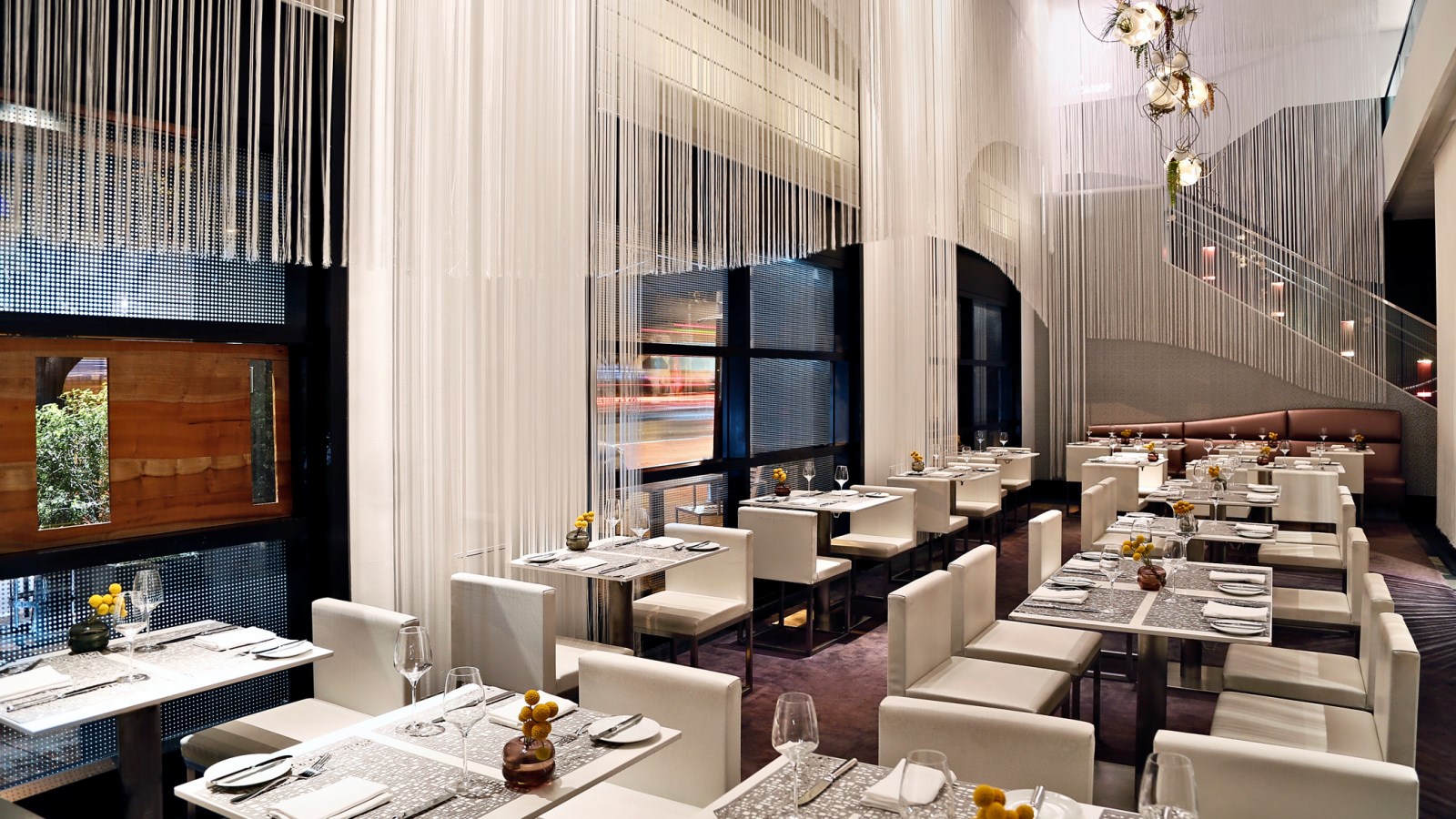 It was nearing the end of our honeymoon and we had a final few nights in the City on the Bay. We’d spent the day driving slowly up from Monterey, stopping off at pumpkin farms en route. We hit San Francisco as the sun was setting and swept over the flyover in our drop-top Ford Mustang, a broad vista of city lights opening up before us as the sky burned in vivid pinks and oranges on the western flank. A quick freshen up and then straight to dine in TRACE. We were greeted with smiles and brimming glasses of brut rosé – a Jean-Charles Boisset No. 69 Burgundy pinot noir – and steered to a table with a commanding view of the room and the bustling street outside.

The restaurant has something of a similar feel to Asia De Cuba at The St Martin’s Lane Hotel. It follows the W Hotel signature style – modern and hip, with pumping music clearly audible from the adjacent bar area, where SF’s trendy young professionals were seemingly gathering en masse to drink and dance and cast off the cares of the working week.

The interior design is square and linear, dressed in white leather and decked with purple lights. Sunshine yellow and magenta orchids adorned the shiny white table along with black table-mats and napkins. Yellow globe terrarium lights hang from the ceiling in a complicated network of wires and bulbs. For those seeking a greater degree of intimacy, pearlised pale aubergine leather booths are shielded behind white fringing.

The rosé having been quickly dispatched, we ordered up a Blind Pig – consisting of Eagle Rare bourbon, Art in the Age Rhubarb liqueur and Aperol – which was nothing short of sublime. The strawberry and basil house lemonade is also to be recommended to those who are wishing to pace themselves a little more carefully (admittedly a prospective challenge, given the inviting nature of the cocktail list).

I kicked off the dining proceedings with an heirloom tomato salad; served on a long slim white platter featuring tiny green, red and yellow tomatoes sitting alongside summer squash, burrata and hazelnuts. I was informed that the farm they are sourced from plays classical music to the plants; and can only voice my support for the method (of which our King-in-Waiting would doubtless also approve), given the succulent moreishness of the resultant fruit.

Tall, Dark and Handsome (now also Husband, boasts the writer) opted for roasted and glazed mushrooms, chicken jus, braised bacon and a poached egg sitting on smooth potato. “I’d have expected your mum to serve me that!”, he exclaimed with enthusiasm, in reference to the very scale of the dish (my mother not being given to even the most basic measure of rationing when it comes to feeding him, as though in preparation for some sort of imminent hibernation and/or famine).  It was like a full English breakfast that had been prepared for consumption by a neonate – all mashed up and smooth, but exceedingly tasty.

Roseo, the wine afficiando, guided us towards the Au Bon Climat Santa Barbara County Pinot Noir. Purportedly good with game, it has hints of red berries, minerals, spice, earth and oak. It is a smooth and graceful wine with a balanced approach; and paired well with the entirety of the meal.

As a main course I chose the skillet roasted 11oz rib eye steak with maitake mushrooms, pearl onions, braised bacon and potato puree… the accompaniments (it turned out) being essentially a full reconstruction of those that had featured in TDH’s starter – and by no means unwelcomely so.  It was enormous.  Truly enormous.

As soon as the waitress had moved away from the table we both stared in amazement at the size of our plates. “I’ve been served half a pig and half a cow here” I mused, in wonderment and anticipation, not untainted by a measure of fear.

“And I’ve got a Canada goose!” exclaimed TDH, quite fearlessly surveying an almighty duck breast, served with braised red cabbage, apple, walnut and calvados vinaigrette. It was indeed gigantic, and in all probability designed with transcontinental migration in mind. “If ducks ever vanquish mankind and succeed in taking over the world, it’ll be these ducks that do it.”

The aim was clearly to produce something approaching haute cuisine; but the scale of portion size was true to the good ol’ American style – and somehow the two elements don’t sit so well together.  The food was certainly tasty and indeed satisfying; but there is something vaguely unsettling about finding oneself unable to empty a plate at a smart restaurant. It may sound perverse, but there’s a certain sense of guilt that creeps in; good food wasted, a chef perhaps insulted, an impression of ingratitude somehow conveyed.

The staff were friendly, and eager to talk us through the menu’s provenance; we were thereby treated to the intriguing knowledge that the restaurant harvests its own honey. In November 2011, the TRACE team rescued two wild honeybee colonies that came from hives where they were considered pests, befriended them and installed them on the roof of the W Hotel. The honeybees have thrived in their new environment, especially with the abundance of food in neighbouring Yerba Buena Gardens. Roger (one of the waiting staff) came out to tell us about his passion. For the last five years he’s been caring for the hives. “I can’t be having swarms”, he mused,  “I am in tune with my bees”.  And off he buzzed to the kitchen.

Visibly bloated, and starting to look a little the worse for duck, TDH declared “I have had an elegant sufficiency, and anything else would render obnoxious that of which I have already partaken.” Nevertheless, we manfully decided to finish with a slice of carrot cake.  We had seen it delivered to the table next to us and it looked terribly inviting (although predictably huge) so we asked for a slice to share. Well, to be precise (and I kid you not) we asked for a third of a slice to share. It was a rather lurid orange, but moist and smooth, with caramelised walnuts, white chocolate balls and caramel sauce. It was served with tea in a shiny black geometric teapot, with a delightful aluminium baby milk carton and a tea bag in a tipi. Our wedding reception had featured tea and cake in tipis, and it seemed fitting to end our honeymoon with the same.

We retired, happy and replete; to sleep the sleep of lions who have richly feasted.