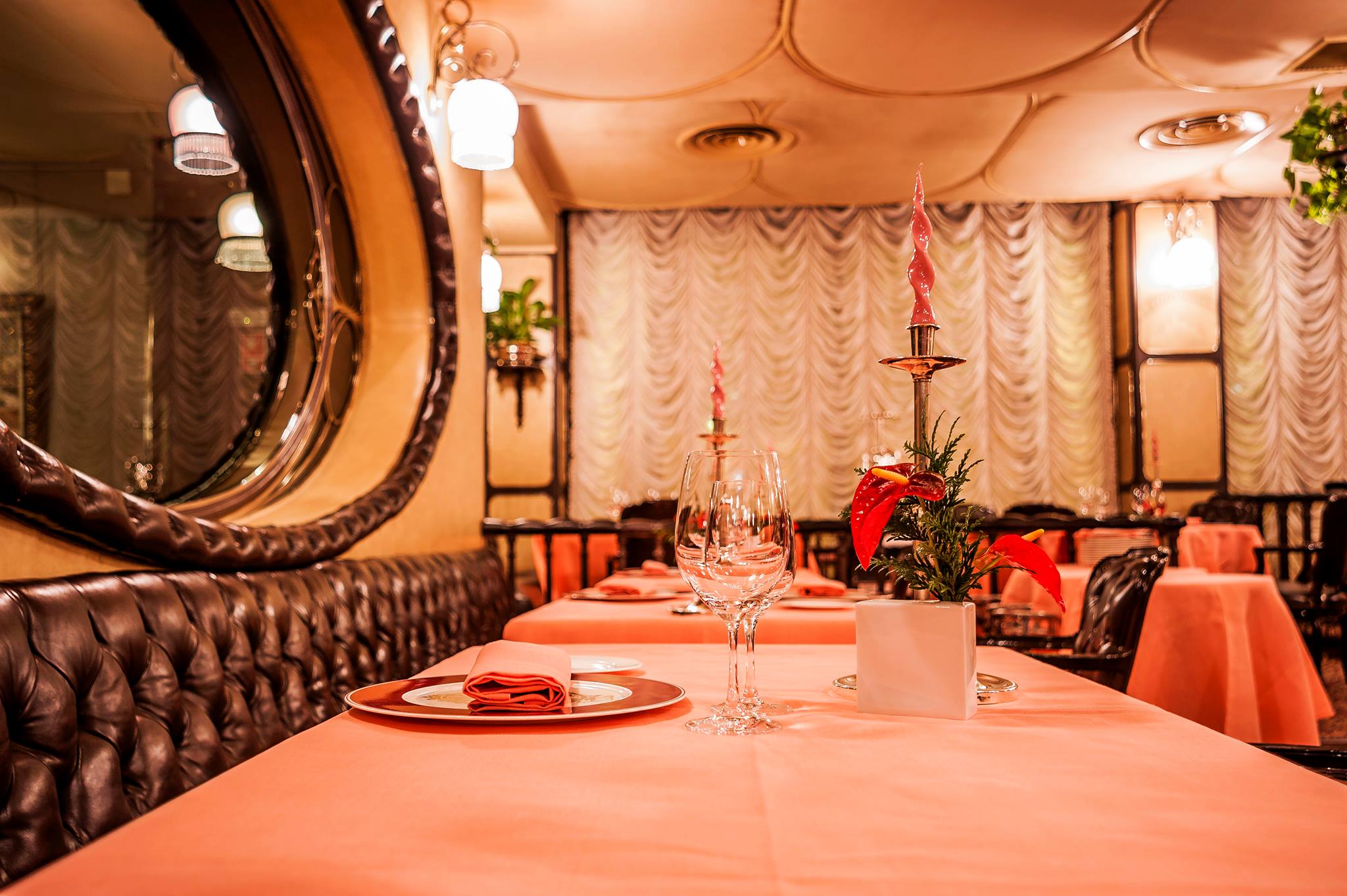 After a strange taxi ride (our driver insisted that he was Disney’s pirate captain, Jack Sparrow), Charlotte and I arrived at Via Veneto to find it looking rather abandoned. We had been in Barcelona for approximately three hours and the trip was clearly taking a turn for the worse, leaving us cold and hungry. Just in case, we tried the door and it opened. Banks of black, button tufted leather seating greeted us, along with several reflections of ourselves in huge belle époque style mirrors that faced each other across a sort of black wood-panelled antechamber that contained a bar.

Manager Pedro Monje was very welcoming and showed us into the brightly lit dining area, where more dark wood loomed. Pale salmon coloured covers adorned tables in a room prepared to seat about thirty. However, we were alone. Charlotte and I exchanged a glance. Servers bustled in and out making preparations, but we were the only customers. Pedro noticed and immediately explained that Barcelonans eat much later, often not until ten in the evening, but other guests would appear at around nine. For an hour, we would have the restaurant to ourselves. However, any concerns that we might have about the potential awkwardness of this situation was quickly alleviated by the outstanding service.

Our menu had been pre-prepared to accommodate Charlotte’s dietary requirements and the sommelier, José Martínez, complete with silver tastevin, was quickly on hand to propose an accompanying wine flight. Via Veneto has held a Michelin star since 1975, which is nearly ten years before current head chef Sergio Humada was born! Humada’s background is impressive, however, with previous training in kitchens such as Mugaritz, El Celler de Can Roca and Arzak (the London offshoot of which provided an excellent dinner for us shortly after opening in 2013). At Via Veneto, the cuisine is modern Catalan – well-loved local flavours and ingredients with Humada’s creative personal interpretation.

We began with a glass of cava and appetisers, including olives with martini jelly and a salmon tartar with Smetana (sour) cream, but quickly moved on to another tartare – this time seabass – with a light citrus flavour and a tiny disc of bread. Charlotte looked at it doubtfully and I heard her begin to say ‘I can’t eat gluten…’ There was a broad smile from our waiter. It was gluten free. The gluten-free bread she had been served on the side was a little like brioche, while my gluten-laden option was flaky like croissant and speckled with olives. Both were delicious.

Our menu comprised some of Via Veneto’s most popular dishes and we were lucky enough to be in the right season for the next course, a flavoured broth packed with sweet peas and artichoke chunks. The broth was warming and strong with umami, while the sweet peas brought out the best in our aromatic but dry Reisling Réserve by Trimbach, Alsace. By this point tables were starting to fill in the restaurant, the clientele made up of mostly small groups, and a gentle hubbub of conversation was rising above the soft lounge-style music. With an atmosphere more lively than many fine dining restaurants in London, Via Veneto clearly attracts customers who feel that good food and good company are both necessary for a perfect meal, not just food alone. There is a member of staff for every diner and, even though this includes the chefs, there is always someone at hand to attend to your every need. This ratio also means that courses are impeccably timed, with an almost psychic understanding of the desire of the diner to linger a little over their wine or the unconscious glance in the direction of the kitchen that signals readiness to continue.

We continued with white wine, a Jane Ventura 2012 Finca Els Camps Macabeo, Penedes, Spain. This was more oaky and smooth, but with more body to balance with the earthiness of the liberally scattered white truffle shavings on our next plate of food. The truffles topped a tagliolini pasta (completely gluten-free), which also had a barely-set egg sitting on top which had been cooked slowly at a low temperature. Once the egg was broken, it combined with the savoury sauce to coat the pasta in delicious, silky creaminess.

Our fish course was another twist on a Catalan favourite: a huge, juicy fillet of hake with samfaina, which is a stew of pepper, aubergine, tomato and onion stew (in this case presented in the kind of tiny cubes that only fine dining restaurants seem to produce), with marinated streaky bacon. This was quite a salty dish, with a hint of aniseed flavour, that was well paired with a Zarate Albariño El Palomar. The ocean aroma and freshness of the albariño grape variety have made it the most popular to pair with fish and shellfish in Spain, and this was a fine example.

The real showstopper was house speciality duck ‘a la presse’, which has appeared on the menu since 1967, in which the duck carcass is placed in a big silver contraption that looks like a steampunk bottle opener and squashed tableside to produce a rich, meaty jus to serve with the breast and vegetable sides. This was rather a theatrical occasion, but well worth it for the concentrated flavour that the sauce imparts. With this dish, we drank a Alion Ribera del Duero 2011 Tempranillo, which was balanced and very easily drinkable – I would have gladly finished the bottle! Discussing this wine led to a tour of the wine cellar, one of the best in Barcelona, if not Spain, and of which Monje is justifiably proud. Here row upon row of vintage champagne sit alongside cavas and some of the country’s most distinguished wines are represented from a substantial number of years.

On returning to our table, we passed the cheese and, having rested our eyes on them for little more than a second, were immediately offered a selection of Catalunyan cheeses to try. The milder cheeses are evidently not as popular as the strong; even the keenest turophile might have found something on this board to surprise them. One particular cheese, its name sadly forgotten, was reminiscent of the sharpness of sour milk and certainly divided opinions at our table.

To end the meal, we were served a twenty year old Pedro Ximenez sherry, which ran into the glass like dark caramel and tasted just as decadent. The dessert was a white chocolate mousse covered with a cocoa veil and Thai-spiced ice-cream, with chocolate and hazelnut ‘puffballs’ that exploded with flavour in the mouth. Sadly, the puffballs were not gluten free, but upon seeing how Charlotte looked when she saw my dessert beside her bowl of (delicious looking) seasonal fruits, our waiter quickly summoned a puffball-free version for her too.

This level of attention to detail in the service is really rare. Every plate of food was outstanding, but what made the dinner was the fact that the service took place unobtrusively and elegantly, while being intuitive and flexible enough to tailor each moment to our exact wishes and incorporate these changes as though they had been part of the well-rehearsed service all along. Next time you are in Barcelona, make sure you visit Via Veneto and bear in mind that it will not be busy until after nine. However, if I was to visit again, I would still book early. The food and experience were so incredible that, even with an hour’s head start, we were still among the last to leave.