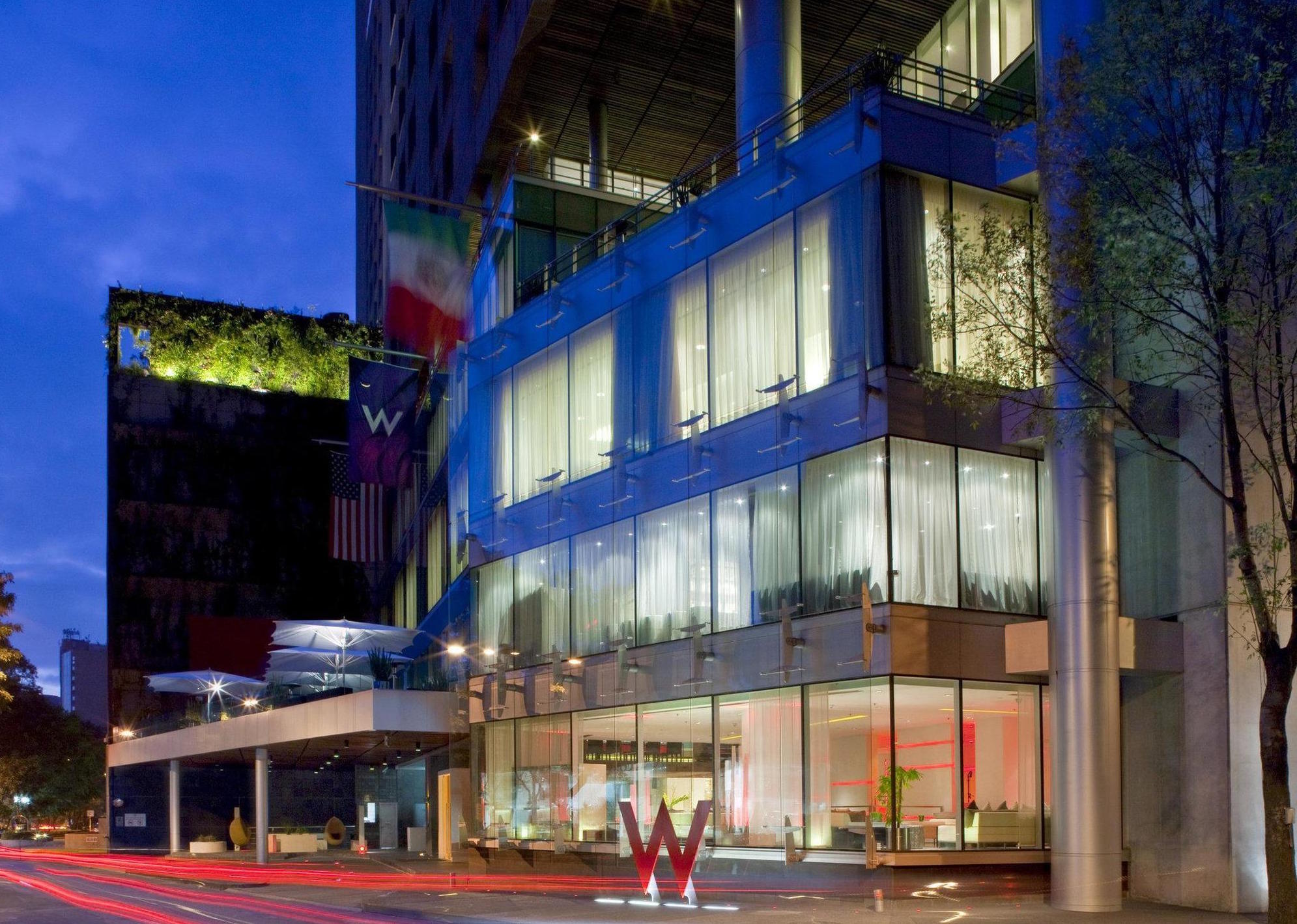 From outside, one could be forgiven for thinking that the W Hotel Mexico City is another of the glamorous boutique shops lining the streets of the trendy Polanco district in which it sits. Animated window displays outside tempt passers-by to visit what seems to be a pop-up tattoo parlour in one of the suites. Top of the range cars come and go outside, transporting guests, business people and artfully styled socialites to and from W’s hub of versatile spaces and facilities.

Newly restyled, the hotel itself is a work of art, combining the bright colours of modern Mexican paintings with sleek, contemporary lines and striking design choices. A twisted, mirrored column provides a centrepiece to the reception area and the bar occupies the space opposite, both surrounded by kooky chairs in the shape of human faces and futuristically lit by rows of lights in bold colours. It’s a lobby from the future, a room that – this is worth mentioning immediately – has mirrors everywhere you look to further bury your reeling mind in the postmodern eclecticism of its design.

We were welcomed by Carlos, who made our check-in very efficient, and shown to our room by Patricio, who informed us that we would be staying in one of the newly redesigned rooms. The lift to the 22nd floor was lit only by cobalt blue LEDs around the edge of the floor and their reflections in the surrounding mirrored walls. Catching sight of my own face in this blue, half-lit, speeding lift was like watching myself in some strange music-video reality… and I loved it. It would not be the last mirror I would encounter.

Our room was fair-sized, with two double beds and enough space for our suitcases to disgorge their contents without impinging on our use of the room. One first noticed that the outside wall, immediately opposite the door, was a floor to ceiling window providing a jaw-dropping view of Mexico City’s downtown area and the distant range of mountain peaks that surround the city. The toilet and a small wetroom, both clad in black and white checkerboard tiling, were hidden behind mirrored walls on either side of this window and his and hers sinks lined one side of these mirrors in between. The mirrors were polished to the extent that one’s mind struggled slightly to differentiate between reality and its reflection but to our amusement, when the toilet or shower doors were slightly opened, the checkered tiling and perpetual images of oneself engaged in bathroom activities were suggestive of a Carry On film as imagined by M. C. Escher.

On one wall, an enormous flat-screen television dominated, while the wall facing it held a lightbox edged in luminous green, in which were suspended several of the traditional, brightly painted, wooded figurines that originate from the Oaxaca area. The beds were covered in white linens, but each also held a pillow printed with an image of a beautiful woman in incongruous historic dress, one as a Spanish colonist in full armour and one as the revolutionary Emiliano Zapata, complete with huge moustache.

This kind of quirky sense of humour was also apparent in other areas with nods to the lucha libre (Mexican masked wrestling) that popped up around the hotel: the luchador (wrestler) bottle opener in the mini bar, the masked signs for bathrooms in public areas and the life-sized (masked) head and shoulders of a bull that protruded from the wall at the entrance to the restaurant, J by Jose Andres.

The W Hotel also contains the Away Spa (under renovation at the time of writing) as well as numerous meeting spaces that can cater for events and conferences for 10 to 340 guests. Throughout the day, it’s possible to see the variety of small groups that the hotel attracts and how the modern spaces might appeal to business people, ladies lunching or friends celebrating. Not only are numerous art galleries and the famous anthropology museum just around the corner, but tourists will find easy access to all the major tourist destinations in Mexico City and its historical centre, whether they wish to rough it on the local metro or call an Uber (a popular choice among all locals). Naturally, the concierge is also happy to help with recommendations for other activities and day trips out to the area’s huge number of cultural sights.

After a long day of shopping in the Polanco area (Louis Vuitton, Hermes, Tiffanys&Co are all within a ten minute walk) a super-cool, young, Mexican crowd descends on the W, as we did, to enjoy the relaxed yet vibrant atmosphere and outstanding service. It’s not just a place to be seen, sitting awkwardly and attempting to be hip, but a place in which you can be seen to be genuinely having a good time, even if the only person watching you is your own reflection. Whether you are looking for a hotel in which to relax with friends or conduct business, the W Hotel Mexico City has embraced the future in its design and hospitality and I look forward to visiting it again in mine.