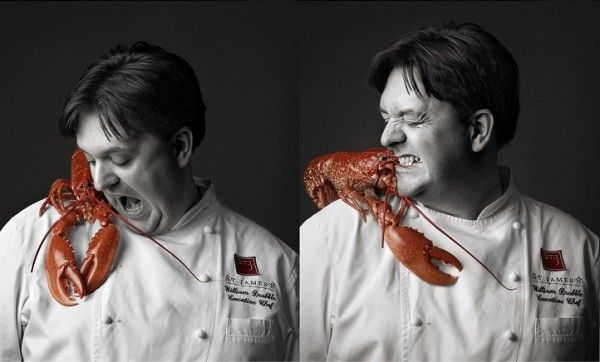 After working in some of the UK’s most influential kitchens, William Drabble is now Executive Chef of Seven Park Place, known for its menu of seasonal, quality ingredients that show an honest passion for food. In 2011, the restaurant, at St James Hotel in Mayfair, was awarded a Michelin star, the third restaurant to be awarded the accolade under Chef Drabble. After our wonderful dinner at Seven Park Place and Charlotte’s fantastic stay at St James Hotel, I caught up with the man himself to ask a few questions.

What made you want to become a chef and has it lived up to your expectations?

Like most young boys from Liverpool my first ambition in life was to play for Liverpool … but when I was 8 and my family moved to Norfolk, we were surrounded by farm land for miles and my passion for food and ingredients probably began there.

I had the chance to appreciate where the food we eat comes from, how it’s grown and I  was perfectly placed to see the seasons change. I was also influenced by my grandmother, she worked in the kitchens of the Earl Fitzwilliam at Wentworth not far from were she was born in Sheffield and the way she would describe it all to me was just so intriguing to me.

After your training, you worked in Eastbourne. How does the big city compare to the countryside for a chef? Would you ever go back?

I moved to Eastborne right after finishing 3 years at Norwich city hotel school, the pace is different… everyone in London is in a hurry. Outside of London it tends to be a little more sensibly paced, so in Eastbourne the chefs (Keith Mitchell and Neil Wiggins) genuinely took the time and effort to show me all the food preparation and cooking techniques that would help equip me for the future. It was a great practical learning experience that I don’t believe enough young chefs get these days.

How would you describe your food?

My style of cooking is French inspired but I try to use as much British produce as possible. Over the years I have found some fantastic suppliers that i am constantly in contact with finding out what is at its best and always taking inspiration from the seasons. My dishes become heartier during the cold winter months and lighter in the summer. Lamb comes from the Lune valley, scallops and langoustine from Scotland, the fish arrives from the South Coast, wild mushrooms from the new forest, samphire from Norfolk , game from Yorkshire etc . . .

I just strive to find the best ingredients I possibly can.

I like to keep simplicity in my dishes because I think that if you use too many ingredients at the same time the flavours become confused. I therefore use the best quality ingredients and let them speak for themselves.

Did anyone mentor you or influence your style?

Over the years you are influenced by so many people and events that it is difficult to narrow it down to one person or situation. I would definitely say that Martin Jermey (my college lecturer) was a big influence in that he helped me get my first job after college and has been a great guide and sounding board throughout my career. I am still in touch with him now and he came and saw me a few weeks ago with someone he was trying to help on their way even though he is now in his 70’s.

Then there was my first experience of working in London at the Capital  restaurant  with Philip Britten (1 Michelin star), followed by a period working at the 3 Michelin starred ‘Chez Nico at Ninety Park Lane’ and then working as a Sous Chef with Tom Aikens at ‘Pied a Terre’ (2 Michelin star restaurant). Each of these experiences taught me something that I have carried with me; at the Capital it was the inspiration of going to the market every couple of days to buy fresh seasonal produce on which the menu would be based around, at Chez Nico it was seeing how a 3 star restaurant could cater for up to 100 guests at dinner and how quality and the simplicity of letting ingredients speak for themselves  worked (this is no small achievement for a restaurant of that level), and finally I took inspiration for Tom Aikens (we both went to the same college and we both did an apprenticeship at the Mirabelle in Eastbourne) who was the hardest working, most focused person I had ever worked with and an incredible cook.

Locally sourced ingredients are a feature of your food, but why are they so important?

Having grown up surrounded by farms I really believe it is important to support British farmers and food suppliers.  Each dish starts on a farm or in the sea, it then takes those farmers and fishermen, to get up in the dark early (mostly rainy) mornings to harvest that produce, which is then prepared for delivery, packaged, taken on a journey and delivered to the restaurant where the ingredients are then painstakingly prepared, cooked and presented by a trained team of professionals both in the kitchen and the restaurant. That is how a dish gets to you. There is a lot of time, care, resources and effort involved.

People are also becoming more aware of what is being put on their plate and where it comes from, seasonality, sustainability and environmental issues are becoming more important criteria for chefs when designing their menus.

When you’re planning a new dish, where do you find inspiration?

I take inspiration from the seasons. I have a great relationship with my suppliers and they know exactly the quality of ingredients I am after. They call me whenever a new seasonal ingredient appears (or I am usually on the phone asking how long until the season starts because i already have a dish in mind) and then the menu changes dish by dish as the seasons progress.

I don’t worry about fads It will always have to be the same to me, buy quality ingredients that taste fantastic, cook them properly, be sensible with your price and look after your customers. If you do that they will come back time after time and you don’t have to worry about jumping on a band wagon to get people in.

If you could have any chef to cook for you, who would it be and what dish would they cook?

Having earned one Michelin star for three different restaurants in your career, including Seven Park Place, what does a Michelin star mean to you and how does it feel to be awarded one?

After leaving Pied a Terre I moved to Grasmere in Cumbria  as the Head Chef at a country house hotel called ‘Michael’s Nook’. I took up the position in August of that year and by the following January we had been awarded a Michelin Star. The following September I had moved back to London and was the Head Chef of the fashionable Chelsea restaurant ‘Aubergine’, once again by the following January we were awarded a Michelin star which I retained for ten years. When you become head chef, the buck stops with you, it’s you on the plate, you’re father to everyone in the kitchen and the responsibility is tremendous. At the time of gaining the first star at Michael’s Nook I was only 26, the pressure can cause you to make mistakes, act out of character and you’re general lack of experience at that age means you can’t always foresee problems. Once you gain that first star it puts you on the radar, all of a sudden you start being more analytical and critical of every dish before you put it on your menu . But as time goes on you develop your own style and the experience gives you enough  confidence to know when to stop messing around with a dish . It’s at this point that you begin to refine your style and start trying to improve it day after day .

Finally, where do you see yourself in ten years and what do you hope you’ll have achieved in that time?