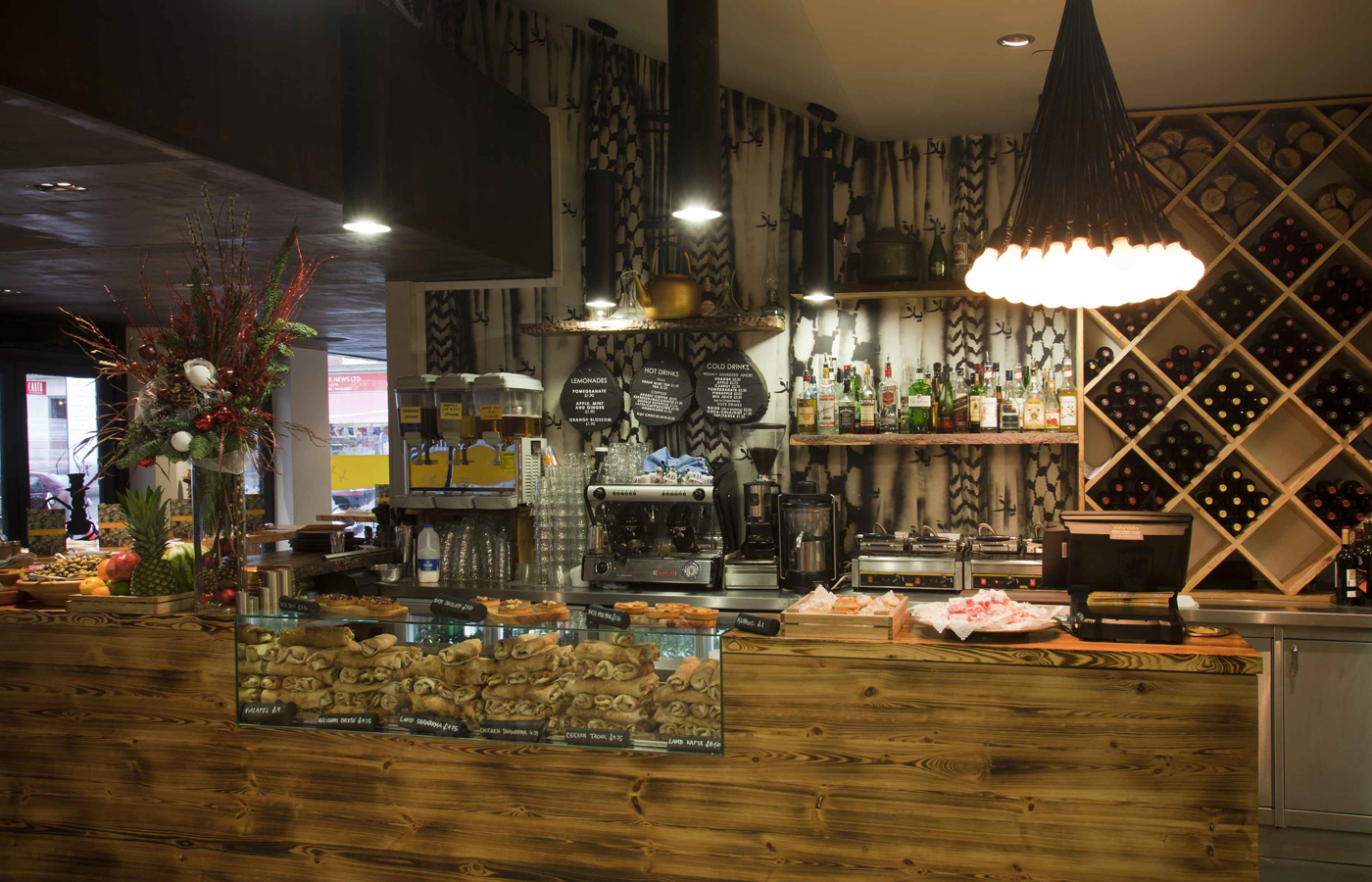 At Bespoke HQ, we try to keep up with food fads as well as haute cuisine and, with the street food craze taking London by storm, I was excited to visit Yalla Yalla, a restaurant serving regional street food dishes from Beirut, Lebanon. The menu is a collection of mezze plates and larger grilled dishes with rice, all to be shared in a casual environment. Situated in Winsley Street, the restaurant is ideal for dinner with friends before a night in the West End and the bustle of Soho’s early nightlife carries through to the lively, buzzing atmosphere inside.

We were shown to a table for two by the window, although there are communal benches and high tables for those who wish to fully absorb the street food vibe. With quite an appetite, it was very tempting to order a sample of everything, but we instead opted for a selection of dishes recommended to us.

We started with a thick and flavoursome hommos, a crisp fattoush salad and a spiced, roasted mixed nut dip called muhammara, which was set to be a firm favourite and which prompted me to ask for the (unique and secret!) recipe, something I haven’t done for a long time! The service was very speedy and the eating almost as fast; we promptly devoured our first basket of pitta breads and ordered more, along with some different dishes, but the restaurant would also be a great venue for the kind of sprawling Friday lunch that stretches into the late afternoon.

The second ‘course’ was equally delicious. The soujoc, tiny Lebanese sausages in tomato sauce, were rich and spicy; the jawaneh meshoué, garlic and harissa marinated chicken wings, were cooked to perfection with the lingering smokiness of the charcoal grill. We also tried some little fried parcels, called samboussek lahmé, with a melt-in-the-mouth, juicy filling of spiced lamb, onion and pine nuts. I did have a wave of possessiveness when we were presented with the kreidis meshoué, from the grill section of the menu, and I realised I would have to watch my partner tear apart and consume two of the four shell-on, grilled king prawns on top. However, after all the lovely – and substantial – smaller dishes and a couple of refreshing Almaza Lebanese beers, it would have been folly to attempt the entire dish myself and still expect to be able to sample the desserts.

After a short respite, we went on to the sweets. My partner chose the crunchy nest-shaped baked vermicelli Osmalliah, served with tangy orange blossom clotted cream, rose petal jam and roasted pistachios. I couldn’t resist the temptation of the Yalla Jou Jou, a dense speculoos-spiced mousse (a flavour from my childhood with my Dutch mother), which was covered in velvety chocolate coating and served with dark chocolate sauce and a strongly vanilla ice-cream. As an unashamed chocoholic, my capacity for sharing only extends so far and, while I demanded that my partner donate a spoonful of his dessert for the purposes of my research, it was very reluctantly that I handed a spoonful over in exchange.

There are two other Yalla Yalla restaurants in London, at Kings Cross and Green’s Court, and a Southbank pop-up, the ‘Summer Shack’, is due to open soon. The pop-up will provide mouth-watering Lebanese food and a variety of refreshing cocktails; you can even choose to eat al fresco with traditional low-level seating on cushions to make the most of the summer. The food is well cooked and unpretentious, as you would expect from street food, and the experience lends itself to relaxed, fun dining. If you’re not familiar with Lebanese food, the mezzes allow you to taste a little bit of many things and to order more of the dishes you enjoy without the rigid linearity of the three – or more – course menu. At the end of the meal, we were full to the point of mild discomfort, solely due to the fact that our greed had got the better of us and the excellence of the food had meant we were unable to leave any on the plates. It was only with the aid of a potent Arabic coffee that we had the energy to leave the restaurant, but I will certainly return; this kind of food is right up my street, I just wish the restaurant was too.