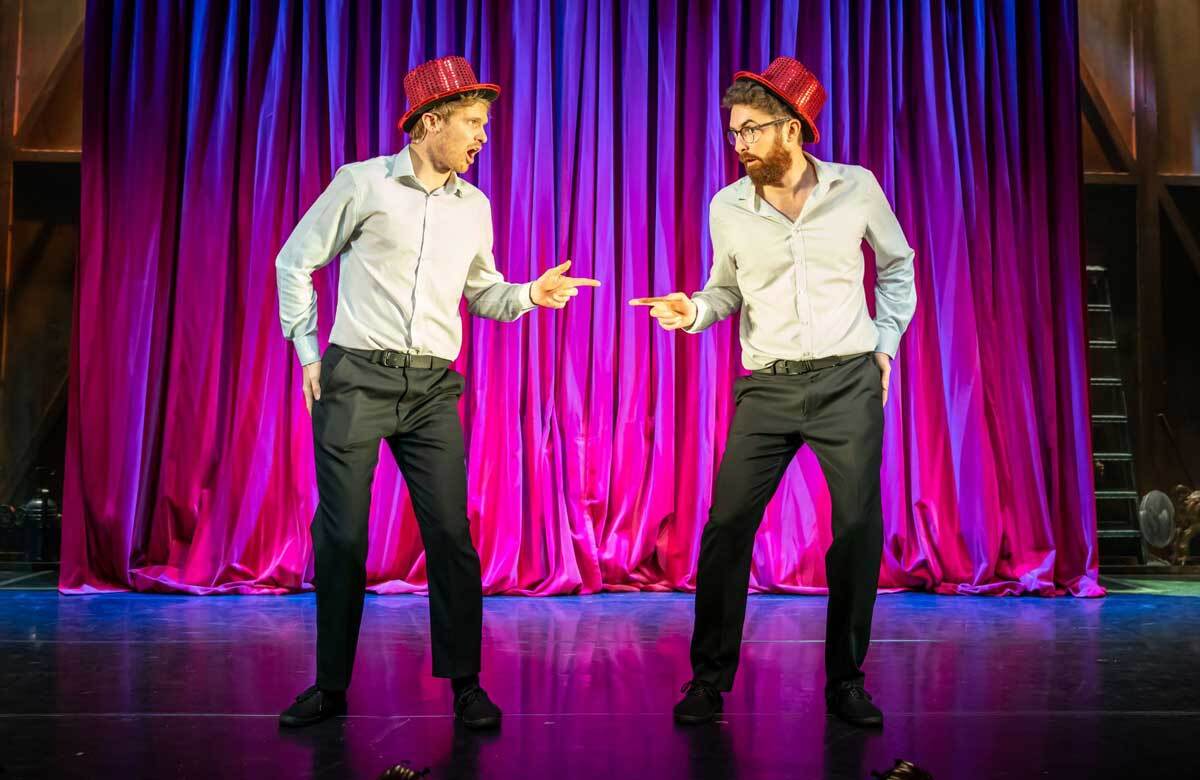 The Comeback is…. back!  After a seven-month hiatus due to Covid restrictions the comedy play has returned to play at The Noel Coward Theatre for a limited run until July 25th 2021.

For the first matinee on 10th July, I was in the audience to see the production that started life as a 55-minute Edinburgh fringe show. Penned and starring award-winning comedy duo The Pin (their real names Ben Ashenden and Alex Owen), the play imagines “Alex and Ben” as a support act for a veteran, vaudeville twosome, named Jimmy and Sid.

Alex is the child-like optimist, only briefly chagrined each time he messes up a punchline, cue, or entrance. Ben is the uptight, tormented one who boasts of being in the forces (ParcelForce) and the Feds (FedEx) but is acutely aware of the failure. When Alex accidentally knocks out Sid, the support act seizes their chance to impress a Hollywood director who just happens to be in the audience of the tiny provincial theatre they’re performing in. Support is given by Charlie Ferguson and Alex MacKeith to keep the smooth running of the physical comedy and clever use of stage props such as two lockers on either side of the stage during a chaotic chase scene.

The scene is the stage at Didlington Arts, a small venue created by Rosanna Vize’s design for front of stage and scenes behind stage, Prema Mehta’s lighting marks the changes and Emily Burns directs. It begins slowly with hapless Alex mucking up every punchline, as the duo run through a series of lame gags trying to build a new routine that will finally bring success. We then meet Jimmy and Sid, who in sparkly red hats and jackets, are dusting off some similarly tired material, trying to rebuild their 70s beloved act.

One of the show’s highlights is the good-natured manhandling of a different guest star, at this performance the surprise guest was comedian, actor, writer, and television personality David Walliams and a brief unexpected appearance from Walliams’ comedy partner Matt Lucas as well! David Walliams handled his appearance with extreme aplomb and even put the duo in their place by telling them off for swearing in front of some of the young audience!

At times the pace flags and it feels more like an extended sketch rather than fully shaped entertainment.  A long sequence in which props are handed from one side of the stage to another, shrinking as they go, is a funny gag but can become tired after being repeated a few times.

If you want to escape for 85 minutes and have a few giggles, the slapstick comedy of The Comeback will be just for you and you never know who you may see turn up as the surprise guest!