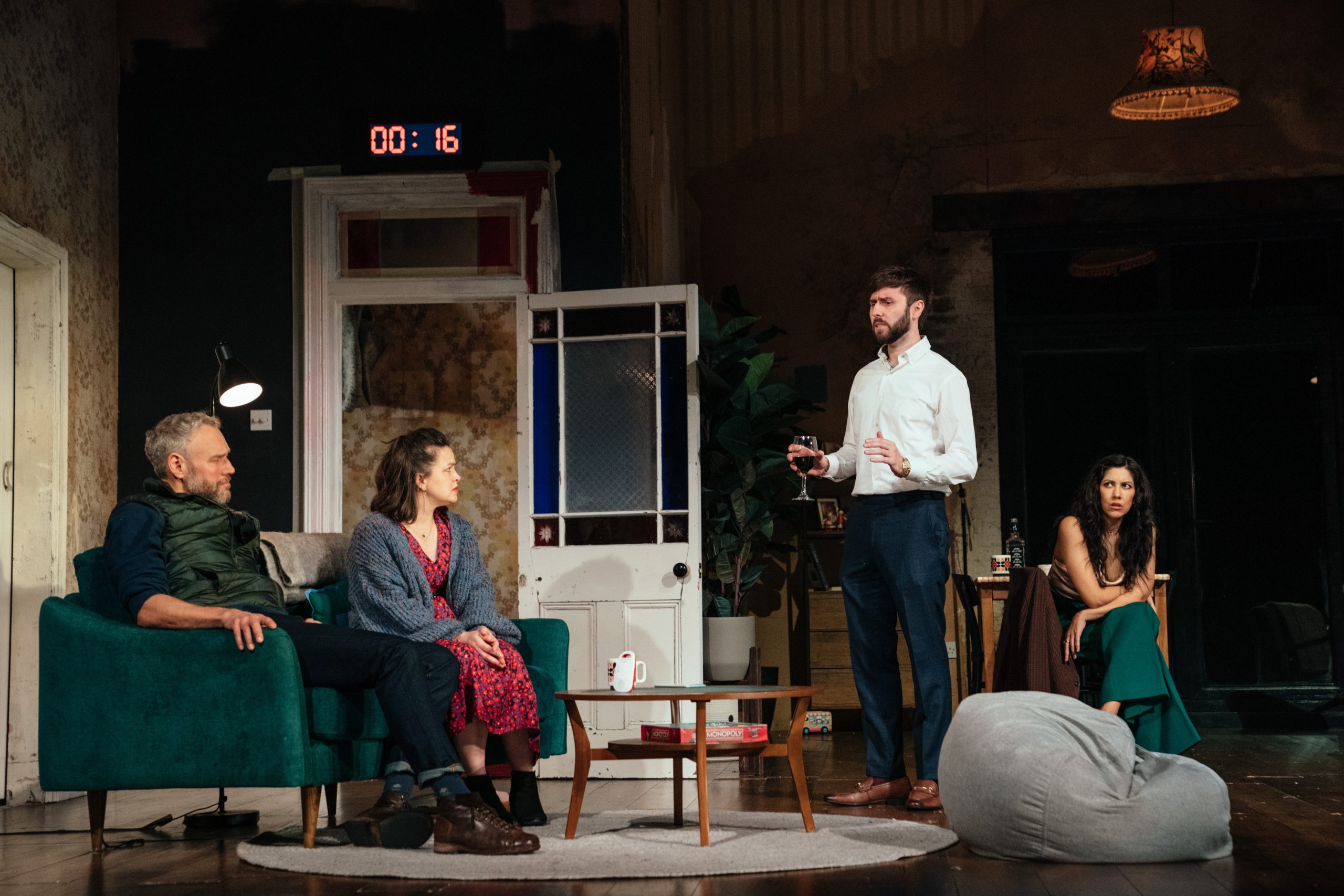 Danny Robins’ play 2:22 A Ghost Story which enjoyed a limited run at the Noël Coward Theatre a few months back now returns to the West End with a brand-new cast: Elliot Cowan, Giovanna Fletcher, James Buckley and Stephanie Beatriz.

The plot of the play revolves around Sam, an astronomer and know-it-all – played by Elliot Cowan (who is likeable/unlikeable and a bit annoying!)  Sam believes he has the answer to everything, specifically in the plot of the play as we are talking about the existence of ghosts: Sam does not believe in them.

Sam and wife Jenny (Giovanna Fletcher) have recently moved into an old house, along with their baby daughter, Phoebe, the house is undergoing extensive refurbishment and Jenny is left to cope alone as Sam has been away. Anna Fleischle’s imposing and clever set design makes you feel you are in a terraced Victorian house being renovated – skylights, exposed brick, stripped back wallpaper and a skylight.  Sam returns from his trip just in time to host a dinner party with Sam’s friend from university – Lauren (Stephanie Beatriz) and new boyfriend Ben (James Buckley).  The play takes place over one night while the characters try to find out what is happening at 2:22 over the last few nights.  The stage has a red neon clock that shows the time and is imposing to the countdown of scares that you expect with a ghost tale, but this play does not have jump out of your seat moments, it has the screams of foxes and flashes of red light almost used in a way to try and pre-scare the audience, I feel this was not needed as it desensitises from the action and the heightening of what is to come.

Well known for his funny role as Jay in The Inbetweeners, actor James Buckley steals the show with his exuberant performance of Cockney Ben: laugh-out-loud funny and full of heart, it has been twenty years since he has been on a West End stage, and it would be great to see him in more productions. 2:22 is actor Stephanie Beatriz’s West End debut, and it was a pleasure to see her on stage after enjoying her performances in Brooklyn Nine-Nine and In the Heights. The role of Lauren is almost the audience’s representative on stage, trying to decide what is real and what isn’t, Beatriz plays wonderfully against James Buckley. Elliot Cowan as Sam stands out in this production with his projection of his lines and successfully makes Sam the thoroughly irritating character he’s intended to be, this shows his calibre as a great actor, and it is nice to see Elliot back on a London stage.  Reigning Queen of the Castle Giovanna Fletcher is convincing as a tired and spooked out new mother but sadly became so shrill in places that we could not pick up her vital dialogue which made the plot hard to follow in some places.

The script is so much more than a scary story, if you were to strip out the ghostly elements you would be left with a domestic drama that would still work on plenty of levels – a husband and wife having their relationship tested, a friend and her new boyfriend ready to throw a spanner in the works.

The final twist reveals the answer to whatever’s been happening at 2:22 each night, it was unexpected and gained gasps from the audience; I almost want to go back and watch it again, to trace the clues!

2:22 A Ghost Story is at The Gielgud Theatre, London till 12th February.