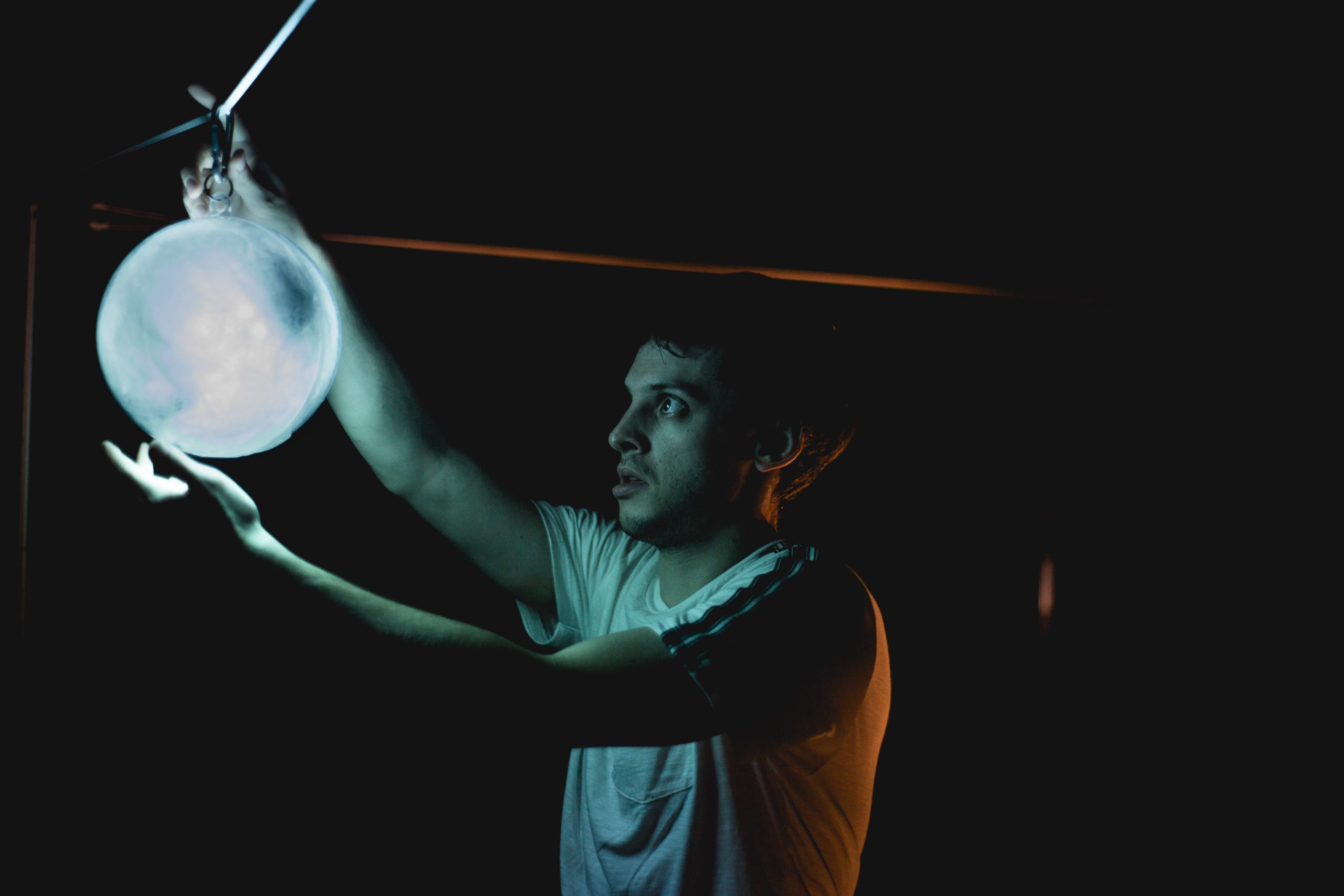 Following a successful run at the Edinburgh Fringe in 2019, Catching Comets will premiere in London at Pleasance Theatre. A heart-warming and honest one-man show, Catching Comets is an inspired piece of new writing about finding true strength in vulnerability. Brilliantly fusing together two stories – one about saving the world, the other about falling in love. We got to speak to the star of the show Alastair Michael about his career and Catching Comets and his involvement since the start.

How did you get into acting? Was there a particular performance you saw that resonated with you?

I got into acting as a teenager at school. Like most kids, I had a lot of confusing emotions that I didn’t really know how to articulate to anyone. Even when I did manage to express something, my range of emotional articulation was pretty narrow so a lot of the time it was just anger. It was then that I started becoming interested in acting. It was an opportunity to navigate and express emotions which were sometimes relevant to me and sometimes not, but importantly doing it through another person and so it was at a safe distance. It inevitably gave me some tools to articulate what I was feeling. As for performances that have resonated with me, there have been plenty but, in particular from when I was growing up, I watched Billy Elliot lots and thought Jamie Bell was awesome.

Sebastian in a play called Moth by Declan Greene. He was a school outcast, he lived in his own fantasy world influenced by manga and he had one friend, Claryssa. He was really funny in a completely unfiltered way and he was unapologetic for who he was. I also loved doing the research for Sebastian because it introduced me to loads of great manga. Most importantly, the team I got to work with were amazing and inevitably the joy of any job comes down to who you work with as much as what the role is.

My training has been quite piecemeal and is on-going, because you never stop learning. I didn’t do a formal degree at a drama school because after my undergraduate degree in English Literature I couldn’t really afford to even audition, which is something I know is not particular to me and, just while I’m on the point, I am all for scrapping audition fees for drama schools. Back to the question though, I learnt a lot from a voice coach called Nic Redman, I learnt loads from a part-time acting school called Manchester School of Acting, I did a summer training residency with Theatre Ad Infinitum which was really instructive and I continue to learn from lots of reading and every job that I have ever worked on.

Can you tell us about your current, show: Catching Comets? What drew you to the show and how does it feel to be in a one-man show?

I have been involved with this show from its inception. The writer/director and I run a company together, so he came to me when he had the initial idea, and I was instantly on board. At that stage, it sounded like it had the potentially to be a beautiful compact play. Also, we’ve been making work together for over 10 years and we always have fun, which is a huge draw. Catching Comets has been really fun to make because what we’re trying to do with it is dissect heroism in its dominant Hollywood form and to do that you have to laugh at it, and ourselves. So, I got to be really silly in rehearsals: one afternoon we spent improvising the most cliched and outrageous action movie sequence including numerous car chases, rooftop escapes, fight scenes with sharks, evil twin brothers, traumatic backstories, school bus rescue missions, all without break. While some of these specifics haven’t made it into the play, the tone is very much in the same place. It is very energetic and high-octane, so being in this one-man show is sometimes tiring. Being in any one-person show I imagine is tiring because you can easily feel alone on stage, without the support of other actors. All that energy you usually get from the other performers you have to get from elsewhere like the audience.

How do you think this show will inspire people? What do you want them to take away from the show?

There is plenty to be inspired by. Like I said it’s high octane with lots of fun action sequences that riff on Hollywood blockbuster movies. There’s lots of film references both in the text and physically and the sound design is epic and bombastic! There are a few inspired technical surprises from our lighting designer Matt Leventhall as well, which the audience have to look forward to. But what we want people to take away from it comes from the other side of the play, the side that is grounded in a story which is really relatable. Ultimately it is about someone who falls in love, but who doesn’t feel good enough to be open to love in return. We want people to reflect on heroism and the idea that being emotionally vulnerable with another person is a form of bravery that is often overlooked.

Some of our previous productions as a company have been site-specific in places like breweries, old closed schools and mills. These have to be my favourites because the surroundings feel so real and tangible. In particular, we performed The Dumb Waiter in the leaky cellars of a Georgian pub in Salford. This was a favourite because it came with so many additional noises like dripping pipes and hissing pumps. These were elements you couldn’t control at all but it added something to the atmosphere and when by accident one of these noises happened to cut the tension, that was great. This venue was particularly memorable because, when we were offered the space, it was full of a lot of really random old pub stuff and we were tasked with clearing it and cleaning it up a bit. And that was entertaining.

It’s very playful which is a lot fun. I also think it’s really rewarding to have to understand and see as other people in my work.

I passed out on stage once. I stayed on my feet, but blacked out and came to seeing blinking lights from the side of the stage. I tried to leave the stage but got coaxed to stay by the other actor, Charlotte Gascoyne. She completely kept her cool and guided me through the rest of the show, she is a star and a cracking performer. Probably not a funny experience, but definitely one I’ll never forget.

I am ashamed to say that I’ve never really had a single role in my mind that I’ve wanted to play. There are lots that I would be really excited to play. If pushed to give a straight answer though, were the gang from “It’s Always in Sunny in Philadelphia” going to produce a full-length theatrical production of Nightman Cometh, I would love to play the role of the Troll. If Danny Devito wasn’t available.

You can see Alistair in Catching Comets at The Pleasance Theatre from 14th September 2021.

In part 1 of her musings, @being_yemi_king gives

Built in the 1880's as part of the East Borneo Com