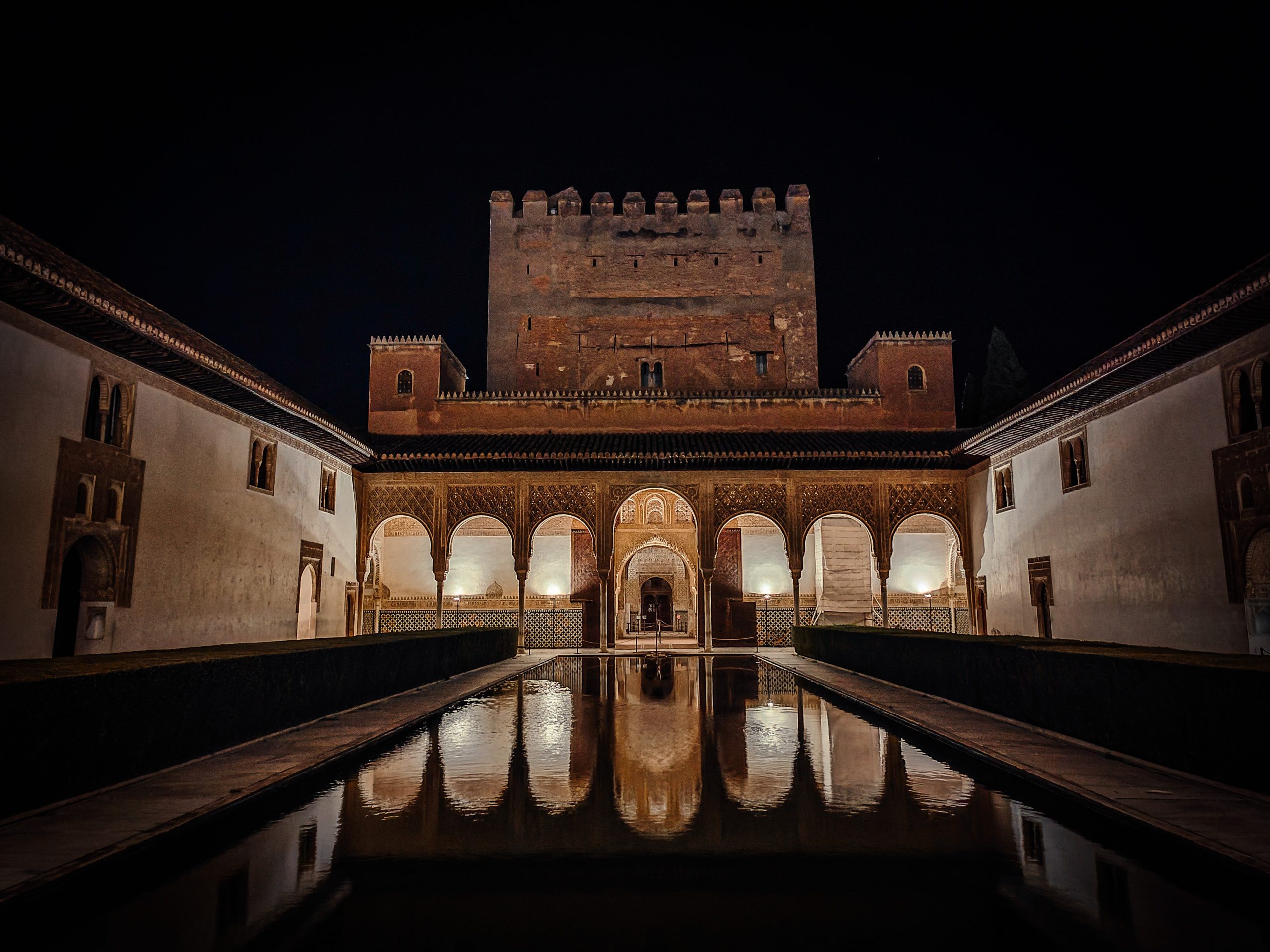 Spain has never exactly been a difficult choice for a city break, but the recent introduction of a host of new post-pandemic Vueling routes from London Gatwick has brought the prospect of a weekend escape ever closer and with two lacklustre summers to make up for, it’s an easy choice for the top of the list. We joined the inaugural flight to Granada for a whistle stop weekend taking in some of the sights not just of this iconic city, steeped as it is in history, but also of Malaga, a mere 90 minute drive away, making for a delicious twin-centre long weekend with minimal hassle.

A Taste of Granada…

With the city centre just thirty minutes from the airport there’s no time wasted with tardy transfers. Check in to the five star Aurea Eurostars Washington Irving, a property that sits in the shadow of the Alhambra and its verdant surroundings, yet just a short walk from the historic city centre. Decorated to reflect the works of American writer Washington Irving – the penman behind the 1832 essay collection Tales of the Alhambra – it combines comfort and romanticism in its elegant interiors, complete with a magnificent library fully stocked with the authors works including rare first editions. A rooftop pool and outdoor terrace, gym and massage service make for a tempting reason to stay it, but such an iconic location is the perfect excuse to get out and explore.

The city itself isn’t just about the Alhambra, though the Moorish masterpiece casts a shadow across the skyline with every turn and is impossible to ignore. The second most popular attraction in Spain only to Barcelona’s Sagrada Familia (and probably only due to limits on ticket sales), it’s an essential visit, though a tough decision whether to do so during the day for the breathtaking views or after dark for what becomes an intoxicatingly magical experience. If pushed for time, book yourself a guide ensure you’re making the most of the experience; ours was Trinidad Blanco of I’m Experience, a veritable font of knowledge and wicked personality to boot – just what you want from an expert you’re spending precious hours with.

Walk In Granada is also worth having on your radar, not only for their free walking tours, but their insider experiences including flamenco shows, Spanish cooking classes and gourmet tapas discovery tours, one of which led us to dinner at Taberna La Tana. This cosy wine and tapas joint run by a brother and sister team after it was first opened by their mother 30 years ago, serves exceptional food including locally-grown asparagus and Spanish caviar (more on that shortly…) and delicious local wines from one of the oldest bodegas in Granada; down one of the city’s busy cobbled streets, it’s a real find.

The Road to Malaga…

Malaga may only be a 90 minute drive from Granada, but there’s a surprising pit stop worth taking en route. Halfway along your journey, pull off to the tiny village of Riofrio and you’ll be greeted with the surprising sight of a Spanish caviar farm. Yes, you read that correctly.

Caviar Riofrio’s founder came south from northern Spain for its better quality of water and after introducing the prehistoric-looking sturgeon to its original trout farm in 1987, eventually started producing caviar in 2004. With a location that makes the most of naturalised pools and crystal clear water from mountain springs, Riofrio is home to several species of sturgeon; the first place to breed them successfully in captivity and the first company in the world to get organic certification for its caviar.

Embark on a tour and tasting while you’re there and you won’t be disappointed; with several variations of to try alongside a crisp glass of local Cava and and a little shop to purchase your favourite, it’s an eye-opening experience (not to mention a really rather delicious one) and a chance to learn about these oddly prehistoric creatures which have remained genetically unchanged for 250 million years.

Making the Most of Málaga…

The second oldest city in the Iberian Peninsula, Málaga is steeped in history while still maintaining the buzz of a modern city. The gateway to the Costa del Sol, its golden sandy beach is mere minutes away from both the city centre and a port buzzing with bars and restaurants just begging to be frequented for long, lazy dinners on hazy summer evenings.

The Soho Boutique Equitativa Hotel  couldn’t be better situated, a few minutes walk from the aforementioned playa and with a view straight down Málaga’s main shopping street. The 7th floor restaurant and terrace also boasts a rooftop pool (something of an essential for a Spanish summer it seems), not to mention that view.

Next door at the brand new Only You Hotel (a space filled with Insta-worthy interiors), the rooftop Mediterranean restaurant Lola serves a local, seasonal feast of 0km ingredients; we dined on a Russian salad, tomato tartare, roasted local artichokes, and steak with asparagus. The ground floor is also home to Carmen, a` vibrant seafood bar and cocktail lounge that was buzzing all day long and well into the evening.

The city has plenty of culture to absorb; the Museo Carmen Thyssen is home to a vast collection of 19th-century Spanish painting, for the most part Andalusian, from the private collection of Carmen Cervera, the fifth wife of Baron Hans Heinrich Thyssen-Bornemisza. With beautiful paintings depicting pastoral scenes, traditional village life and flamenco it transports you to a bygone era, while some of the most prominent names in Spanish art are housed there, from Goya to Picasso. Speaking of whom, the city is, of course, also his birthplace and the Museo Picasso is home to some of the iconic artist’s paintings, drawings, graphic works, sculptures and ceramics; a must-visit for any art lover.

Despite being a hotbed of art, it’s perfectly possible to spend your time in Málaga just enjoying the city’s gastronomy. The only acceptable Sunday breakfast is a steaming cup of liquid chocolate with a crisp mountain of churros, hot out of the fryer. Find the best in town at La Malagueña but be warned, it’s not for the faint-hearted (or the diabetic…). The creative Andalusian menu at José Carlos García has awarded it the only Michelin star in the city, La Deriva serves up delicious salads and seafood and for a casual brunch La Sal y el Son’s local gastronomy includes fried fish, anchovies in vinegar, and traditional Andalusian dishes such as salmorejo (tomato and bread soup) and flamenquín, slices of jamón wrapped in pork loin, breadcrumbed and deep fried.

It’s certainly a foodie-friendly break, but one location you definitely shouldn’t miss is El Pimpi, the restaurant and bodega part-owned by Antonio Banderas, who incidentally has a penthouse next door – play your cards rights and you might spot him sauntering home after a night at the theatre while you’re enjoying a drink on the terrace. El Pimpi’s menu features local, natural, fresh, seasonal produce; we sampled some exceptional tuna tartare with avocado, roe and puffed rice, melt in the mouth jamón, so buttery it needs no accompaniment and stunning grilled octopus, enjoyed in a buzzingly cosy space you know has seen some stories over the years, not least from the legions of signed photos of famous faces linings its walls.

Twenty minutes from the city centre and you’re back at the airport, meaning maximising your time in town is as easy as pie. It’s perfectly possible to sample a taste of both of these Spanish cities squeezed in to a swift weekend break, provided you’re not too fussed about being lazy with your time and would rather make the most of every (delicious) opportunity. Both are packed with superb food, not to mention some buzzing bars for whiling away long summer evenings and just the right amount of culture to enjoy without getting bored. Make the most of Vueling’s new routes (with each flight just 2h40) and take a delicious trip you won’t regret.

Laurel was a guest of Vueling (www.vueling.com) to celebrate its new London Gatwick routes to Spain, and the Andalucía Tourism Board (www.andalucia.org).