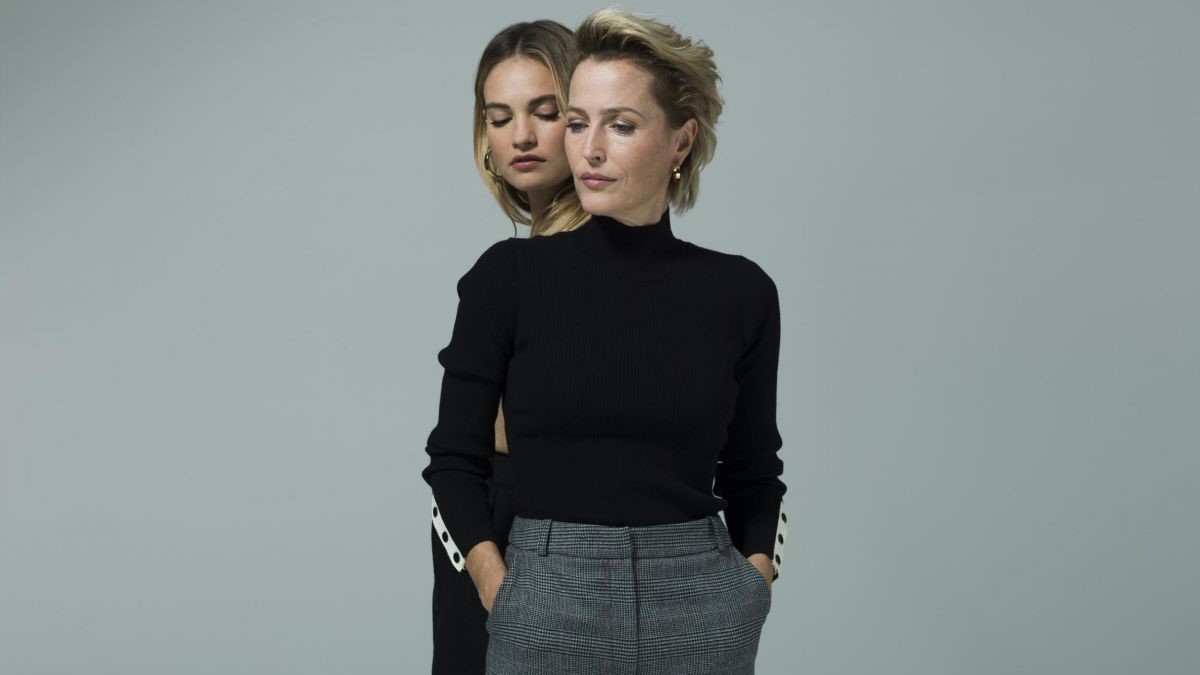 “Fasten your seatbelts. It’s going to be a bumpy night!” All About Eve is a smorgasbord of such tasty morsels — dished up like dialogue canapés, and washed down with a bottle or two of champagne!

The short story-turned-radio-play-turned-Oscar sweeping movie is now a West End show, with Gillian Anderson as the ageing star Margot Channing, and Lily James slipping into the cold skin of Eve Harrington.

In Ivo van Hove’s staging, the lead’s self-pitying monologues do go on! But still, Anderson is magnetic as the paranoid star, both fragile and lets face it, a bit of a narcissist. She relishes her lines too, delivering each with yesteryear Hollywood gusto. She swans around the set, bending the space around her, never getting swallowed up by it. Her transatlantic drawl is stretched to its dry, droll limits and relishing her lines.

The silvery walls of designer Jan Versweyveld’s stage are studded with portraits of Anderson’s Margo: lips pouted, hair tussled, hand grazing a cheek. They’re the sort of shots that sell make-up or clothes, and sit in glossy magazines on glossier coffee tables.  The designs from Versweyveld and Ivo van Hove are a very similar technique to their work brought to Network at The National.

As Channing blubs into her martini, a screen above the stage shows Eve scheming in an off-stage kitchen. This split-screen staging cleverly lets the plot play alongside the subplot, and adds a movie-like dimension. It’s a bit like a movie within a play or watching a live screening at the cinema. A camera sunk into the dressing mirror is used to skin-crawling effect, and is surely a critique on the all-seeing eye of 21st century fame.

James’ obsequious-to-the-point-of-sickly understudy is a slow-burn. You know pretty sharpish something’s awry, but it takes two hours (with no interval) for every pretty layer to be stripped off. When she eventually flares up in her true colours, fighting with critic Addison DeWitt (Stanley Townsend), you can’t take your eyes off the scene sparring.

Other actors in the production – Monica Dolan is outstanding as Karen, the watchful civilian in a world of embattled theatrical pros and Sheila Reid as a witty dresser, Julian Ovenden as a fraught director and Rhashan Stone as a gullible playwright lend good support to the leading ladies

Though the two Hollywood leads will rightly bring in audiences, the real star here is the writing. All About Eve is a modern fable about the trappings of showbiz, which glints with diamond-sharp, noir-dialogue. “The only thing I ordered by mistake is the guests,” snaps Channing at a gin party.

As for that ending: it’s one of the most delicious twists in stage and screen history. Careful what you wish for!

Ivo van Hove the Belgian director, has said that he didn’t watch the classic movie of All About Eve again before creating this new version, because he didn’t want to be influenced by it. I suggest you do the same. Because there’s no way this stylish production can compare with the fireworks of the Bette Davis original but it is still an entertaining evening at the theatre in this modern age of celebrity.

If you cannot get a ticket to All About Eve of get to London – The National Theatre Live will be showing a screening in April.

All About Eve is on at the Noel Coward Theatre until 11 May 2019. You can book online.