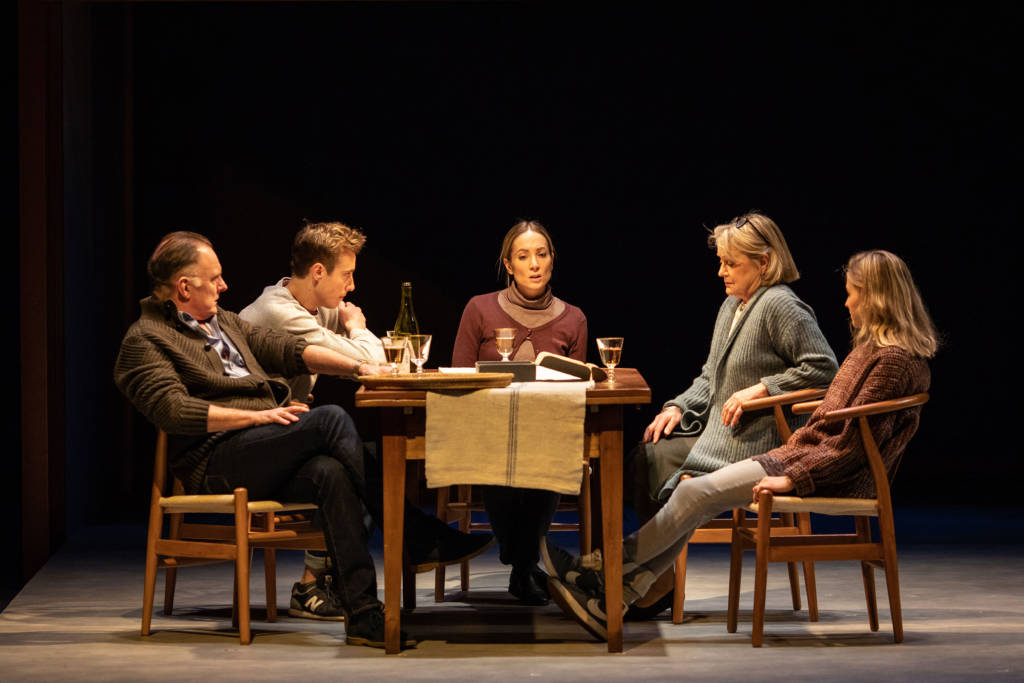 The Alys (pronounced Alice) of the title Alys, Always makes only the briefest of appearances, dying in a car crash in Lucinda Coxon’s stage adaptation of the popular Harriet Lane novel of the same name, which opens on stage at The Bridge Theatre, London.

Alys final moments are witnessed by Joanne Froggatt of Downton Abbey fame taking the role of Frances, the central character and a narrator, required to deliver screeds of exposition during a production directed by Sir Nicholas Hytner on a thrust stage designed by Bob Crowley, cleverly utilising the Bridge’s stage machinery to keep things moving, while aided by some poignant cello compositions by Grant Olding, played by Maddie Cutter.

Froggatt plays Frances, a “diary monkey” for the arts section of a Sunday newspaper who is struggling to see any way off the bottom run of the ladder. When she witnesses the car crash – at the start of the play and comforts the driver in her final moments, the last thing she’s expecting is opportunity to climb the ladder but when she discovers that the woman was the wife of a famous writer, Frances seizes her chance.

Asked by the family to share those final vital moments, she gets her feet under their table and once there, resolves to never let them go, inveigling her way into the affections first of distraught daughter Polly (Leah Gayer – in her stage debut) and then grieving husband Laurence (Robert Glenister – is as watchable and compelling as ever. I’ve never seen him give a bad performance and this is no exception). Joanna David as life time friend to the family, Charlotte brings class to her role and also hides some secrets too from the family who the children: Polly and Teddy (Sam Woolf) have come to rely on in the wake of their mother’s death.

Frances new connections spill over into her work life too, boosting her prospects and awakening an ambition that becomes increasingly ruthless. Frances is revealed as something of an anti-hero, the type of woman who’ll give you a hug but be rifling through your handbag as soon as you nip to the loo.

Froggatt is excellent as the near ever-present Frances – at the start I felt sorry for the character and how she was treated by everyone but by the end Froggatt managed to make Frances’ appearance different with body language and facial expressions completely opposite to when we first met her!

Other performers in this piece: Sylvestra Le Touzel as Frances’ boss Mary stands out in the News room scenes and ads humour, but unfortunately Frances’ makes sure her life is truly manipulated by her plans. The supporting cast is made up of Simon Manyonda, Vineeta Rishi, Danny Ashok and Sue Wallace – cast members also successfully play other roles in the story as it progresses.

A gripping psychological thriller that excavates the fault line that separates the entitled from the unentitled. It’s also a real landmark for Director Sir Nicholas Hytner: some 40 years into his career, he’s finally directed a play written by a woman – better late than never with this fabulous production!

To book tickets or for more information see online.