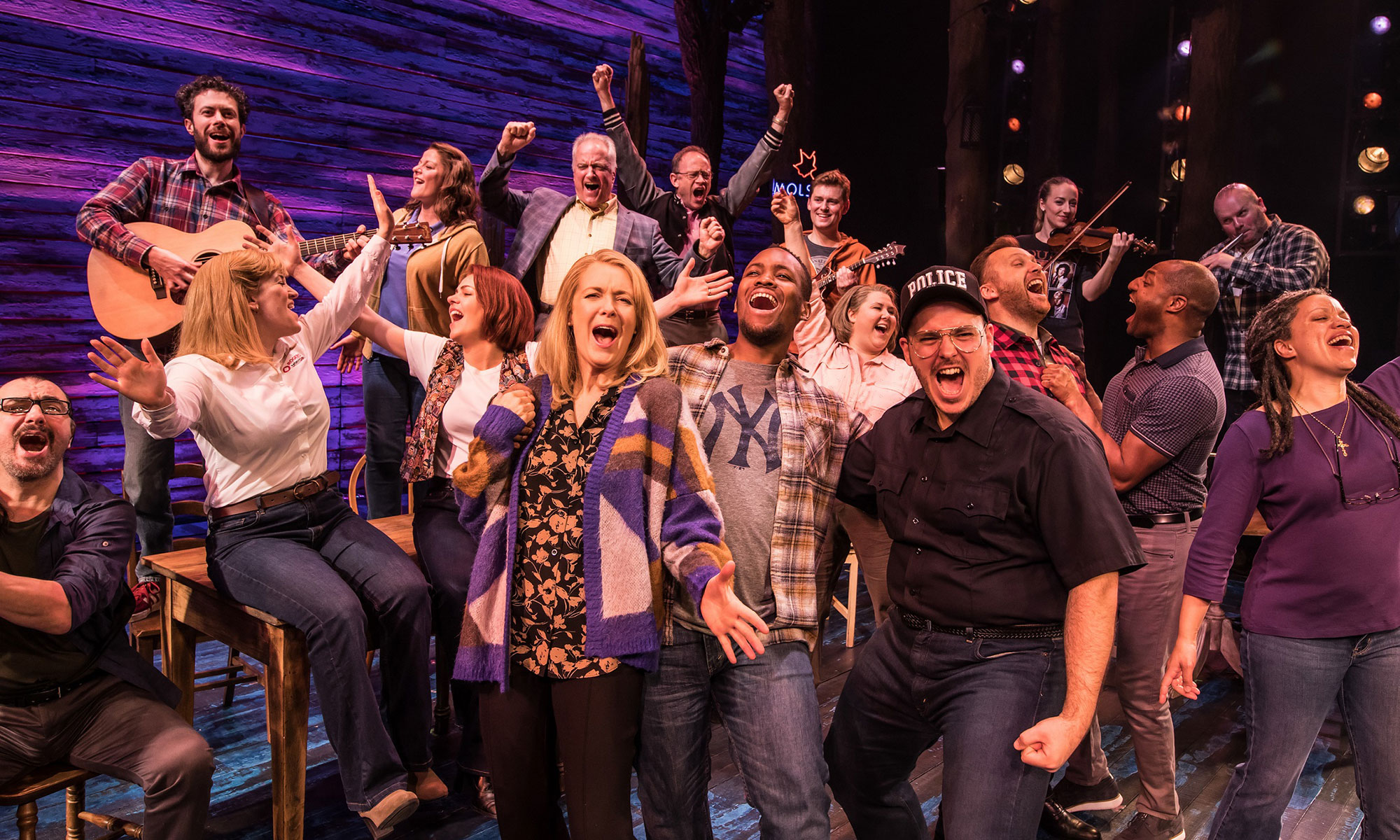 Come From Away the Canadian musical by husband and wife team Irene Sankoff and David Hein makes you come away from the Phoenix Theatre with the message of finding human kindness in the darkest times.  This is a genuinely original musical, not drawing on a pre-existing film or book, but based on true-life events that give it a powerful resonance.

The show tells the true and touching story of how the Newfoundland town of Gander embraced 7,000 strangers after their planes were diverted there amid the chaos of 9/11. The show has become the longest running Canadian musical on Broadway running into its second year, playing to standing audiences as the tickets are so high in demand.

The show was nominated for seven Tony Awards including Best Musical, Best Book and Best Score of a Musical, and winning for Best Direction of a Musical and received critical acclaim, with the New York Times’ Ben Brantley calling it a ‘big bearhug of a musical’.

Christopher Ashley’s production is now being flown all over the world, with the UK production touching down at the West End’s Phoenix Theatre, after a stint at Dublin’s Abbey Theatre – where it was applauded.  Now it’s in London until September at least.

The 100-minutes tell us the tales of the people who have “Come From Away”, the local residents who help provide food and shelter not just for people but the animals stranded on the planes as well.  There are touching and funny moments in the show with some of the passengers “kissing the fish” to become honouree residents of Gander, the mother awaiting news of her fire-fighter son and an Egyptian chef bemused by the fish and cheese dish available!

A tight-knit ensemble company of actors, all of whom play multiple roles, add fierce commitment and bring a spellbinding individuality to each character they pick up along the way. These include pilots, like American Airlines pilot Beverley Bass (Rachel Tucker), locals like mayor Claude (Clive Carter) and Bonnie (Mary Doherty), and passengers like Kevin and Kevin who are in a relationship (David Shannon and Jonathan Andrew Hume), and Diane and Nick (Helen Hobson and Robert Hands), who meet and couple up while they are on the island.

The musical numbers are touching and the show’s biggest number (Me and the Sky) is sold with gusto by Rachel Tucker, as a veteran pilot Beverley who’s blazed a trail for women’s rights. Using her powerhouse voice, as witnessed in Wicked, Rachel Tucker really showcases the emotion in the number.

With the cast switching between the roles it adds to the approach that heightens the sense of the groups happily merging, and the other songs, mostly choral and propulsive, have crowd-pleasing warmth as well as a Celtic accent.  As befits a hymn to the power of community, this is an ensemble piece – where everyone touches a piece of your heart.

Kelly Devine’s musical staging ingeniously use rearranged chairs to evoke both a suffocating plane cabin and the diverse spaces opened to the visitors.

A hugely uplifting watch despite the tricky subject matter.  The show manages to pack a lot into the interval-free 100 minutes. In the end its defining features are charm, energy and a real generosity of spirit, and audiences are left feeling the light and heart that the people received in Gander.  It’s a show with an impact that’s difficult to describe: it feels like it creeps up on you unawares, before flooring you with emotion. I was just overwhelmed and I would recommend it to theatre newbies and avid fans alike!