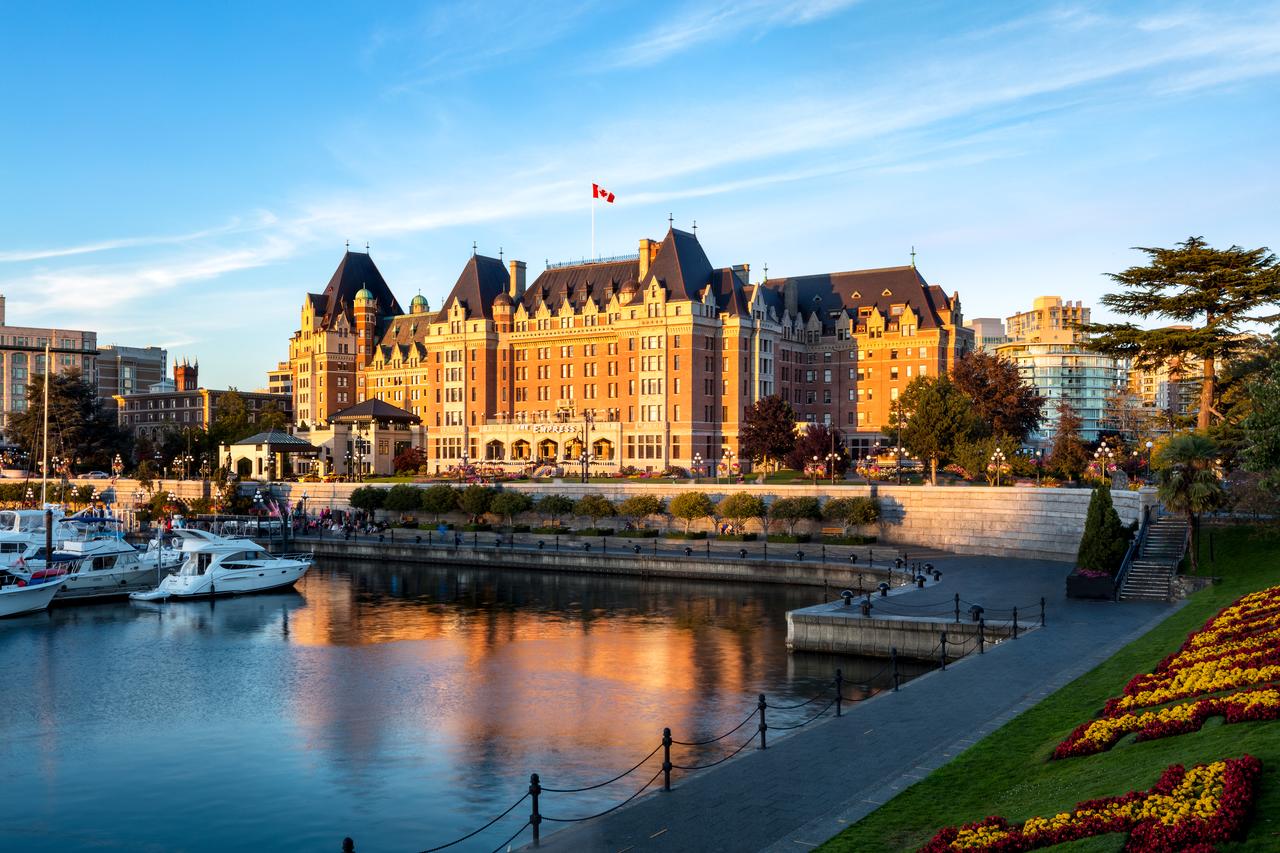 British Columbia’s heart and soul may be its mountains, but that of Victoria, its capital, is the Empress. The Hotel Fairmont Empress, a historic icon from 1908 and recognized as one of the Top 21 Iconic Hotels in the World by National Geographic Traveler, marks the province’s capital city. Located on the city’s stunning harbour, overlooking the mountains and ocean at once, this spectacular Edwardian era hotel has been recently renovated to reflect the finest of modern luxury.  Both old and young, antiquated and contemporary, this remarkable place makes the perfect place to stay in historic Victoria.

It was the final week of November that my partner and I visited Victoria from Vancouver for a weekend staycation to reign in the beginning of advent in festive style. With an array of Christmas and New Years activities and located in British Columbia’s oldest and most ‘British’ feeling cities, the Hotel Fairmont Empress was the ideal destination for us as two London expats in search of a new home away from our old one.

Designed by Francis Battenbury, who also designed the legislature building in the same city, the Empress is a National Historic Site of Canada. And no wonder – boasting beautiful architecture with a fascinating story of Hollywood celebrities, Kings, and…ghosts, this hotel is a luxury museum in and of itself. Everybody from the Prince of Wales in 1919, to Queen Elizabeth II and Prince Philip in 2002, and Charles and Camilla in 2009, this royal institution has also played host to Rita Hayworth, Katharine Hepburn and John Travolta (amongst others). It is also, of course, haunted.

After undergoing a brilliantly rich $4 Million renovation in 1966, and then again with a $60 Million one in 2017, the historic hotel is continuously being made fit for royalty. Adding to its accolade of offerings the most modern of luxuries, it currently has 464 gorgeous guest rooms, a stunning new lobby and porte-cochere, fantastic pool and Health Club, luxurious meeting rooms and event spaces, and (perhaps most importantly), a contemporary culinary experience at Q at the Empress and Q Bar – the Empress’s multi-award winning restaurant.

After being greeted by the gracious hosts on arrival, my partner and I made our way to the fifth floor where our guest room was located. Featuring a fantastic sea view, this large and luxurious room brought us a plush en-suite bathroom, vast bed with an array of plush pillows, television and mini-bar, plus all the amenities one would expect from a five star venue. The interior, with its antiquated feel, deep woods, and decadent velvets, felt homely and familiar, whilst the modernity of the contemporary amenities reminded us that we were here to be pampered.

And pampered we were. In the spirit of Christmas, the Hotel Fairmont Empress offered a festive Afternoon Tea – a wintery version of their classic – that we went down to after lounging around our room. Thoroughly enjoying the treat of wandering the vast expanse of the Empress Hotel as our humble abode for the weekend, we made our way to the luscious lounge bar where Afternoon Tea typically takes place. During the Summer months, over 400 people per day come to enjoy Afternoon Tea here (more than most hotels in London) and after experiencing it, we clearly understood why. With multiple gloriously decorated, dazzling Christmas Trees dotted around the lounge, decadent arm-chairs and a spectacular sea-view, the lounge makes the most lovely place to wile away a lazy afternoon. The grand piano behind the tables offers a place for live music, whilst the generous hosts doting on every table ensure that guests are well and truly looked after. The festive Afternoon Tea itself began with two glasses of Veuve Clicquot champagne (my favourite), whilst we reclined in our comfortable chairs, remarking over the grandeur of the room. OF the extensive selection of teas, we chose two Empress classics, both of which were excellent, and served meticulously. The tiered-platter of treats that came out soon after was equally delightful. With a festive twist, the sandwich selection included mini brioche turkey buns, smoked salmon blinis, and bite-sized ham sandwiches, whilst the cakes delivered everything from Christmassy macaroons, to Christmas fruit cake and tiny tarts. The scones, a mandatory part of every Afternoon Tea, were wonderfully rich yet crumbly, and the clotted cream wholly English. Delicious.

After wiling away the hours with our tea, my partner and I made our way to the Q at Empress Bar, where we found a cosy, candle-lit corner to carry on chatting away in. Deep in conversation, and utterly relaxed in the bar’s warm and luxurious atmosphere, we made our way through a perfect bottle of Pinot Noir, one of many excellent choices on the extensive menu. With the sun set and the cold, winter chill well set into the oncoming November night, we wandered to the Terrace to gaze out at the sea view. Surprisingly, we were not alone. The Terrace was bustling. Groups of happy guests wrapped in blankets and bantering away, were bent over fire-pits and roasting s’mores. Asking the hostess, we learnt that this was a Christmas treat at the Empress, and so we decided to join in. Finding our own table and fire-pit, a host came to look after us, bringing a s’mores bag for two. Armed with prongs, graham crackers, marshmallows, and home-made Empress chocolate (which was delicious on its own), we got to work roasting and making s’mores late into the night.

With the night well and truly set in, our s’mores finished, and our rested blanket-covered bodies ready for slumber, we lazily made our way back to our room for a good night’s sleep. The silence of the Victoria harbour, the cosiness of the feather-comforter, and the warmth of the homely guest room ensured we slept well and long. After rising late in the morning, we took in turns to enjoy the beautiful bathroom, before heading down for a late brunch at Q at Empress. Our bellies full of breakfast (my partner had a wonderful chicken and waffle, whilst I had the very good tuna poke dish), we said our sad goodbyes to the Empress.

As we drove home to Vancouver, we reflected on how we had spent a whole weekend in the interiors of a hotel, yet found it as hospitable as home, and adventurous as travel. The remarkable duality of historic and modern, antiquated and contemporary, made the Empress feel at once familiar and foreign – the perfect balance for a restful get-away on our doorstep, We will definitely come again – and think you should too.