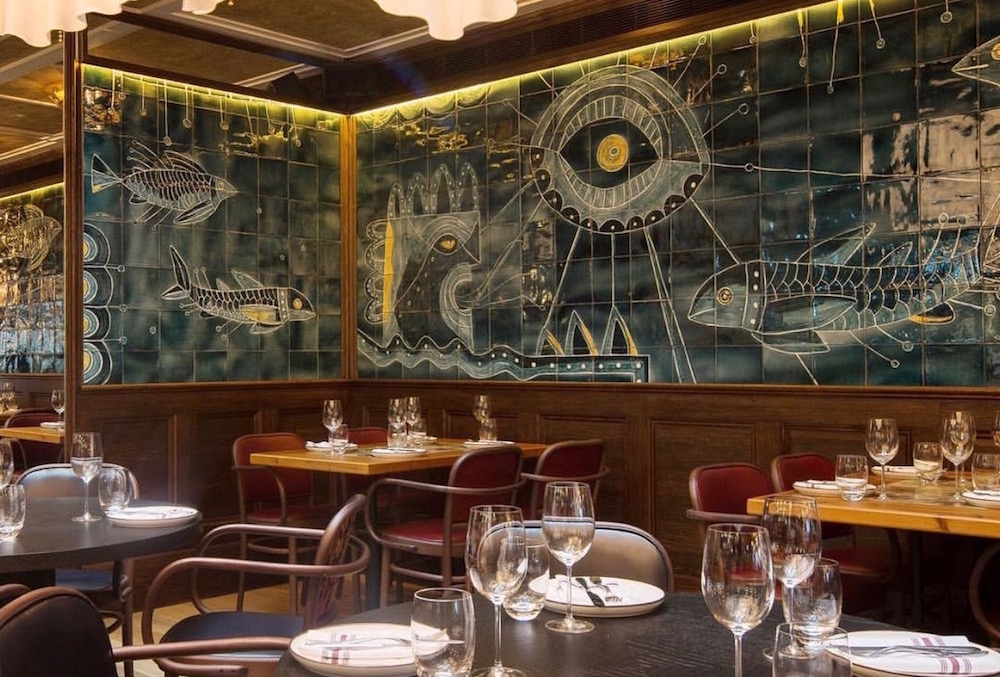 Stylish Soho spot Hovarda may have opened its doors in 2017, bringing Aegean dining and hospitality to central London, but this spring i embarked on its first ever guest chef series, House of Hovarda, bringing some of the most influential and up-and-coming chefs from around the world to its kitchen.

It’s a beautiful space, something that wouldn’t feel out of place down the road in Mayfair rather than its Rupert Street location, but with elegant interiors, an open kitchen and a double height ceiling in the main dining room it certainly has the feeling of an indulgent night out.

Last week it was the turn of Brad Carter of Carter’s of Moseley, a restaurant in Birmingham’s leafy suburbs named after its self-taught Chef Owner. With a menu wedded to British produce and home-grown supplies, the Hovarda collaboration brought with it a four course set menu at £50 a head with a melting pot of flavours.

A Carlingford oyster was grilled in aged beef fat, a completely indulgent mouthful  that had no business being that delicious. Quite frankly it’s ruined oysters for me; never again will I be satisfied with a paltry teaspoon of shallot vinegar. Delicate mackerel was accompanied with persevered tomato, its flavour encapsulated in a crystal jelly, with a sprinkling of Exmoor caviar, a flavour trio to be savoured. The Scallop Tripe utilised the usually discarded skirt (rather than being actual ‘tripe’) and delivered a really dish with a wonderful depth and texture.

We loved the meaty razor clams, served in OW broth with a red pepper dulse, followed by a crispy, rich barbecued duck served with a roasted carrot side and a fruity jus. The finale, a refreshingly flavoured Grand Fir ice cream, was the only dish we didn’t love, though it was a suitable end to such a feast.

Slipping off post-food rather than take up a seat at the cosy upstairs bar, we missed the in-house DJ taking to the decks at 10pm, but with food this good and such a gorgeous vibe we’ll certainly be back. We’re already looking forward to discovering the next guest chef series they are hopefully lining up for the not too distant future.