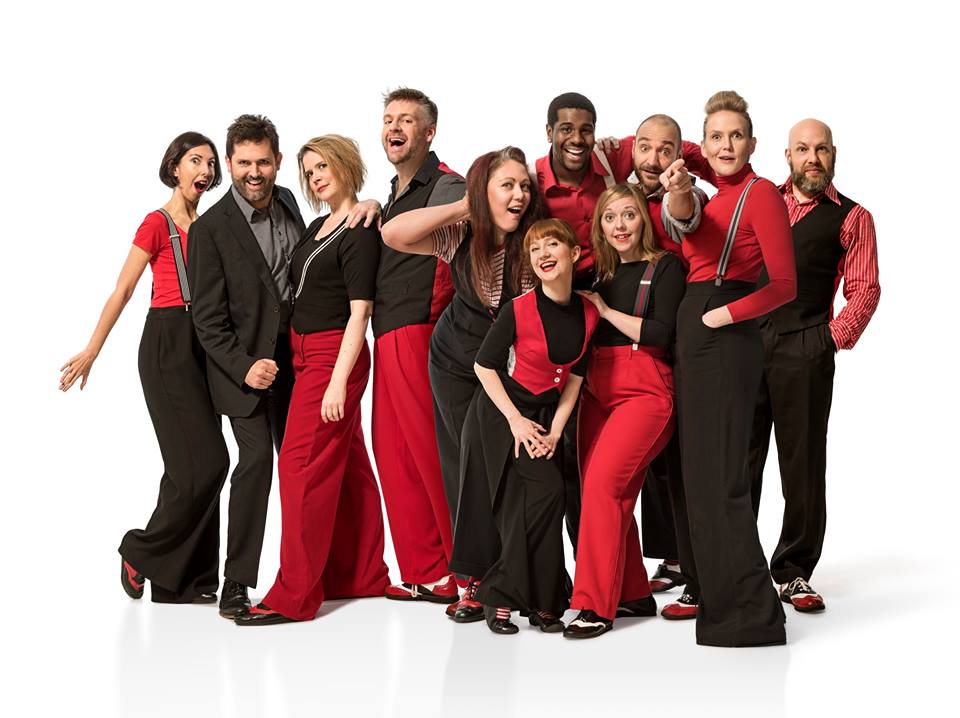 Lucy Trodd is a performer, writer, improviser, singer and comedic actor. After university, Lucy Trodd worked extensively with legendary theatre maker Ken Campbell, this led to an intense affair with improvisation and the founding of Showstopper! The Improvised Musical (West End, Radio 4 and many Edinburgh Festivals). Lucy Trodd has performed in over 800 full-length improvised musicals. In 2019 for The Other Palace run, Lucy produced and sings on the first ever Showstopper! CD. We got to speak to Lucy Trodd about comedy and inspirations and all things Showstopper!

How did you get into comedy, was there a particular performance you saw that resonated with you?

One of my biggest childhood memories is trying to go to sleep and hearing the sound of my parent’s belly laughing at various comedies. When I was old enough to stay up (you had to watch it live in those days!) we watched Blackadder, Fawlty Towers, French and Saunders, Victoria Wood, Red Dwarf, Whose Line etc. That’s one of my happy places; watching TV comedy with my folks and sister. They also took us to The Comedy Store and to various stand up shows on tour (we were probably a bit too young to watch a few of them!) At my Nan’s we watched a lot of Cary Grant- sophisticated comedy. I also REALLY LOVE PANTO. At school I’d always loved musicals. Then I went to Middlesex University discovered stand up, TV production and writing.

After uni I got an agent and was worked in a production company in Soho and auditioning a bit. It wasn’t until I took a workshop at The Actors Centre (‘Impro with Ken Campbell’) that I fell in love with alternative improvisation and was asked to join Ken’s troupe. There were hardly any courses back in 2004 and certainly no ‘scene’ like it is now. We were discovering what impro was without a map. We would look at some of the Keith Johnstone’s exercises but mostly we just went with whatever Ken said. We performed at The Royal Court, were sent to Canada (where we brought back The 53 hour Improvathon) and this is where Showstopper began.

What drew you to improvisational comedy?

My best friend encouraged me to take some courses as I was mostly working in an office and making the odd short film but not really acting. I just remember at the end of the workshop with Ken (mentioned above) he said “Who wants to come to Brighton tomorrow to do a show?” Something very loud inside me said “JUST SAY YES”. And I did. That call to adventure was very clear to me- although I wasn’t sure why I said yes- I just had a sense it was important. I can’t imagine what life would be like if I hadn’t gone to Brighton that next day and improvised a musical about the 2005 floods in New Orleans. Would I have met my husband and Adam and Dylan and eventually Ruth and all the Stoppers?

Tell us about Showstopper The Improvised Musical and how you got involved in the Olivier award winning show?

I was there from before the beginning I suppose. I met Adam and Dylan doing the Ken workshops. One of the first shows I did with Ken he said; “Can you do a bit of opera?” and again I knew there was only one answer! Dylan used to play the piano for us back then. The audiences always loved the singing bits. Adam and Dylan then developed it further and I was always there. In the beginning we worked for nothing other than the applause! But from our first Edinburgh ( a 70-seater portacabin in George Square) people were queueing round the block. Edinburgh has always felt like home for us.

What’s the most popular choice people shout out as suggestions?

‘Popular’ is an interesting word! The most frequently shouted out suggestions (not including the topical Brexit or Trump or whatever is in the news at the time) would be Atlantis, The Moon, Buckingham Palace, The Vatican, Tesco/Ikea/Greggs I reckon. You can check out the show archive on the website. What people think they want and what they actually want to spend 90 mins watching are two separate things! We always try to ground the crazier suggestions and focus on relationships and truth.

What’s been one of the weirdest Musical’s you have all had to come up with?

The ones set inside brains, jars, at the back of fridges are often weird or “slippery” as we say because you have to do so much to establish the world. My favourite is when we’re trying to have a serious heart-felt number at the front of the stage and in the background there are some distracting ostriches or something!

How did you find the 8 week run at The Other Palace and will Showstopper be doing a residency again?

I REALLY loved The Other Palace. The staff were so supportive and friendly. I love that it’s a hub for new musicals and it really felt like home to us. We got a new set and a few new hats- not in my massive head size though! The space was a teeny bit tricky at first as the band was behind us (normally they’re at the side/in front), we had to develop some new techniques to end songs- i.e. using our whole body. But it was a really nice run, and we launched our first ever CD and had our 1000th show and helped to celebrate Lord Lloyd Webber’s birthday and we did a great Q&A with Terri Paddock from My Theatre Mates. The audiences were amazing throughout the run- one of our regulars had her 100th show! Amazing!

Great question. I loved The Apollo theatre space for our first run in 2015. The shape of the stage and the room in the wings were ace- probably sentimental reasons too! We were the first improvised show to win an Olivier Award and found out during the run. But sometimes when the space doesn’t immediately suit us, we adapt and I think the show gets better because of it. We now mostly stand behind a screen so the audience can see we’re not planning and we can get on stage quicker. I also seem to always enjoy Hull Truck- the shows have been mostly set in Hull- the accent is great and the audiences are AMAZING and proud! West Yorkshire Playhouse, Sheffield Crucible, Manchester Palace are all fantastic venues. It is such a privilege to get to visit them all. I have fond memories of Singapore, The Gilded Balloon debating hall and Greenwich Theatre. So many amazing theatres around the country… and the world! Lucky us.

The adult’s show- when we are in sync is incredible- playing to hundreds (sometimes thousands) of people creating something spontaneous that has never been and will never be again. It’s breath-taking in beauty to know that it only happened because of the people who were there. We want to keep and preserve things in life- it’s so zen and heart-breaking to let it go. I love the memory trickle after a good show- in that you find yourself laughing about something brilliant someone did or said. It’s like a lovely dream. We couldn’t do what we do without the audience contribution. Being in Showstopper makes me feel brave. Sometimes I feel like when I walk onto stage I am jumping from a plane, or going into battle. And we only survive as a team. Honestly this kinda stuff can save humanity.

Sometimes I corpse because I catch myself believing I’m in a musical. We are such a bunch of misfits and weirdoes. I remember in one Edinburgh saying to Ruth “We must avenge the death of our Father!” and then I laughed as I was so serious about it! One of my favourite things which happens not very often in a show is when your character dies on stage and you get to lie on stage and watch the rest of the scene from the best seat in the house. It always makes me feel like the luckiest person. Sometimes you accidentally say something rude and the audience laugh and then you realise what you’ve said so you laugh and they laugh at your reaction. And it’s so forgiving and human. Truth in Comedy.

My son is very funny. My family have always valued comedy. It took me a long while to realise. At school and drama school the emphasis is often on who can do the best serious acting/crying. My family made me realise you can’t have drama without comedy and that comedy was just as valid. I think comedy has more kudos nowadays but back then it was seen as a lesser choice of career. Victoria Wood, French and Saunders, Buster Keaton, Marx Brothers, Joyce Grenfell, Anna Russell, The Goons. Musically I love Jon Boden, Bon Jovi, Joni Mitchell, The Carpenters, Musicals and a lot of Folk and Jazz.

What is your next project?

Sue Harrison and I are working on a few comedy ideas together. Watch this space. Let’s just say one is a height-based sitcom set in a seaside town. I’ve also been transcribing The Welsh Biography of my great great grand father. Not sure what that will become.

Where can people follow Lucy Trodd on Twitter/Facebook/YouTube etc?

All things Showstopper: www.theshowstoppers.org
My website: www.lucytrodd.com
Twitter: @LucyTrodd
You can listen to my 2 radio series on the BBC Sounds App: www.bbc.co.uk