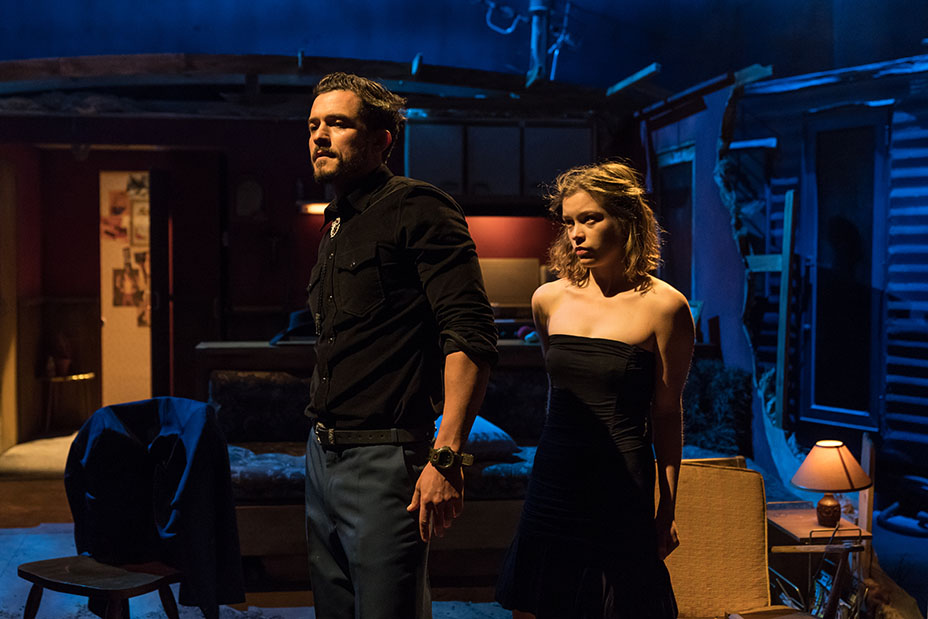 Fourteen years before he won the Pulitzer Prize for August: Osage County, Tracy Letts made his playwriting debut with Killer Joe, a violent bite of Southern Gothic about a guy who hires a hitman to kill his mother (You may know it as a 2011 film starring Matthew McConaughey). This production at Trafalgar Studios sees Orlando Bloom in his first British stage role in a decade.

It’s no surprise when things go wrong for the trailer-park family in Letts’s bad dream of a pulp-noir tragicomedy. After all, if you hire a local cop/hitman to kill your awful Mumma for her life insurance, and if said nutjob is being played by Bloom you know the moral line is going to be drawn in survival.

However uncomfortable the play makes you, Letts keeps you hooked from the outset. A visibly deranged young guy, Chris Smith (Adam Gillen), bursts into the Texan trailer home occupied by his dad, his stepmother and his sister. Since Chris is heavily in debt to the mob, over a failed drug deal, he has a simple proposal. He suggests to his dad, Ansel (Steffan Rhodri), that they hire a hitman to bump off the old man’s first wife Adele and collect the insurance claim of which Chris’s sister, Dottie, is the sole beneficiary.

There’s only one problem: they don’t have any money and when they finally meet the contract killer, a policeman that moonlights as a contract killer: Joe Cooper (Orlando Bloom), demands a substantial down payment of $20,000 which the Smith’s can’t pay. Instead unwillingly the down payment is agreed in the form of Dottie (Sophie Cookson) the naïve, childlike young sister of Chris.

Bloom is a charming guy, and he summons some of that charm here. There’s something very menacing about the vacant way he looks and his slow movements around the set. He has a one-note way of speaking, almost rasping, but that monotone suits the character, something uncertain between charismatic and psychopathic. Adam Gillen shows depth as desperate son Chris. Sophie Cookson admirably suggests that Dottie’s seeming simplicity conceals a sharp-eyed awareness and Steffan Rhodri as their father and Neve McIntosh as their stepmother nicely mix the dim and the deceitful.

The key relationship of the play is between Joe and Dottie. The latter is said to be 20 but seems younger, a strange, unconvincing combination of innocence and arrested development, with a habit for sleepwalking; she perversely sees in Joe something akin to a white knight. As for the killer himself, he’s possibly mad, definitely evil, yet despite his crude transaction — and moving into the trailer to take his prize — he appears to have feelings for the girl. Their surprising rapport raises the stakes when, predictably, Chris’ plan goes south.

Contemporary resonance aside, the play is a shocking black comedy, with a thriller’s motor, whose depiction of its underclass arguably panders to prejudice. It can be a rollicking ride, as Letts cranks up the tension toward a confrontation between Joe and the Smiths in a scene that is best known for the cop’s vicious and twisted use of a Kentucky Fried Chicken drumstick on one of his victims.

Designer Grace Smart’s set certainly puts the trash in the trailer — dominating the stage, the Smith residence is a ramshackle tangle of beer cans, scattered magazines and assorted junk, with a constantly buzzing TV as its centrepiece. The sound of barking dogs in the yard suggests neighbourhood chaos. I liked how the trailer seamed into the first few rows of the theatre and you felt like a piece of the action.

Director Simon Smith does mine the entertaining mix of tension and hysteria in the climax, the production feels like it’s spinning its wheels for much of the evening. Though game not least for the nudity and at times emotionally challenging violence this piece is cleverly plotted and queasily gripping, Letts’s play offers a prophetic portrait of a society with you leaving the theatre never looking at KFC in the same way again!

Killer Joe is on at the Trafalgar Studios until the 18th August 2018. Tickets are avalaible at the box office or online.