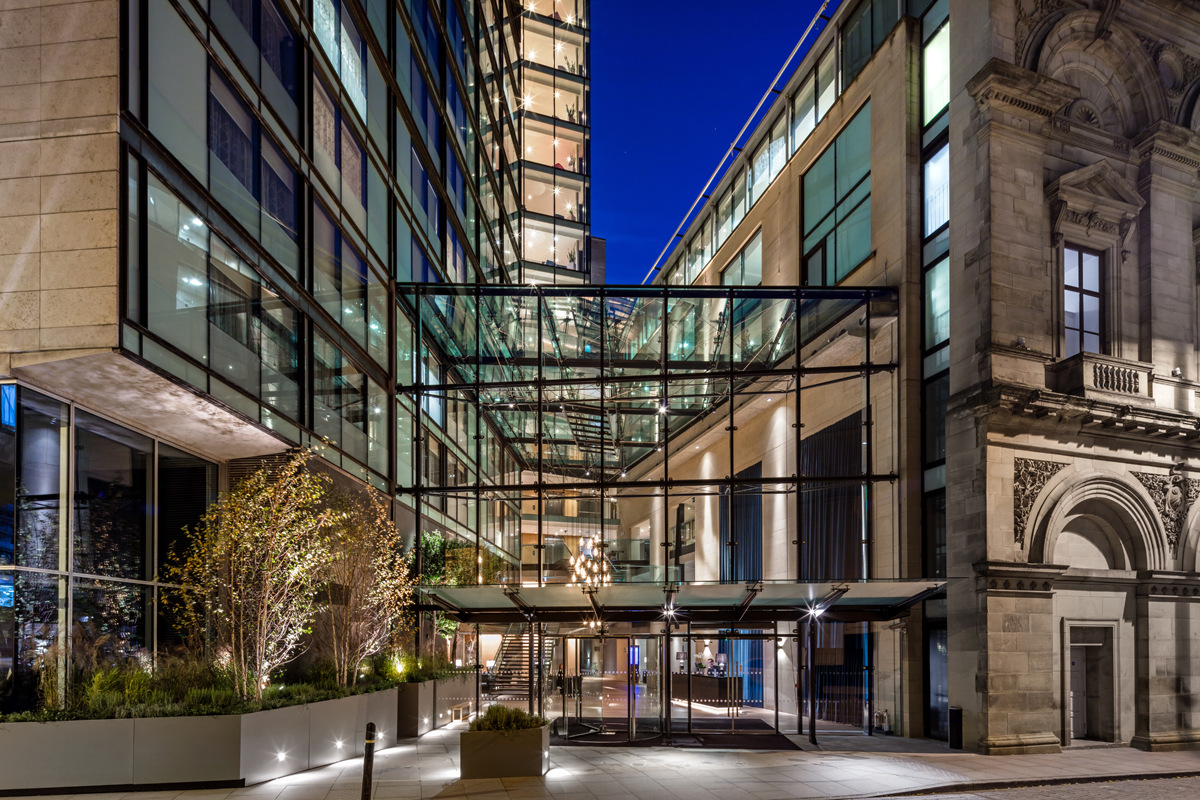 A night out at Peter Street Kitchen in Manchester is not just about the food, it’s about the experience. Fusing Mexican and Japanese cuisine – which sounds like it wouldn’t work but very much does – this newly opened restaurant in the city’s centre – is an absolute treat from start to finish.

Located at the five-star Radisson Blu the space is smart and elegant with a Japanese minimalist ‘Ma’ vibe throughout. The bar boasts an impressive selection of sake and Japanese whisky and the friendly bartender was quick to recommend a pre supper cocktail. We had a Plum Fashioned: bourbon, plum sake, palm sugar and bitters. Served in a highball glass with a giant ball of ice it was potent and punchy. We also went for a Rikyu Royale: Roku gin, grapefruit, homemade green and jasmine tea cordial with a splash of Moët & Chandon Brut. Again, tasty and appetite whetting – we couldn’t wait to begin our culinary journey!

Peter Street Kitchen has a lovely open plan eating area but is also equipped for private dining experiences with dimly lit nooks, shielded from the main area by stylish shoji screens. We were sat at one of those, with a view of the bustling street outside.

The staff at this place are also what makes it exceptional – they almost become your friend and are incredibly knowledgeable about the menu. So we left our choices in the hands of the very capable Mustafa.

To nibble on we had lemon butter and chilli sea salt edamame which were excellent… a perfect snack while we waited for our array of small sharing plates to arrive. Then came the king prawns wrapped in crispy filo pastry with creamy wasabi mayo and warm Wagyu beef with dried chilli and yuzu mayo tacos. The wasabi mayo had just enough kick and the prawns were generously sized and juicy. Meanwhile Wagyu beef is always a treat and this didn’t disappoint: rich, tender and marbly. The meal was paired with a 2014 Chianti Classico Riserva – perfect.

Next came blanched spinach and hazelnut salad, simple but bursting with flavour. Definitely the vegetable side we would recommend. The veggie and chicken tempura with creamy spicy mayo and chilli ponzu was up next (to make sure all meat groups were represented) with the crispy batter was just right and not too oily. All of the dishes had a small break in between to make sure you could really appreciate each taste and there’s absolutely no sense of being rushed.

The second part of our meal was the more Mexican inspired. We were brought robata mezcal-glazed smoked paprika ribs that were delicious. Sometimes ribs can be somewhat thankless with the lack of actual meat but these were melt-in-the-mouth and really filling. The glaze was rich and sticky and were a definite highlight. The other Mexican hot dish we very much recommend is the snow crab with spiced mayo – meaty and juicy with a certain bite.

The combination of flavours works exceedingly well  – the fire and smokiness of Mexican fare with the more mustardy bite of Japanese. We were full but not busting…plenty of room left for pudding. Again we trusted the staff to recommend something special. Neither Mexican or Japanese cuisine is particularly noted for their sweets so we were curious.

We were presented with a chocolate bento box with genmaicha ice cream. This is obviously a playful take on traditional bento: a Japanese ‘lunch box’. Various cocoa treats with the green tea flavoured ice cream made for a unique yet tasty dessert. We also had the kuro goma cheesecake with hassaku orange sorbet. While green bean flavoured cheesecake may sound a bit off, it was actually palate cleansing and not at all heavy. A bit of an acquired taste though, nonetheless. Both were washed down with a warming teapot of premium sake. Unlike other post feast liqueurs like grappa (too strong) or limoncello (sugar overload) sake is clean tasting and pure.

Peter Street Kitchen has been overseen by Edwardian Hotels London’s Service Excellence Director Amir Jati, who established global private dining during his ten year tenure at the Robert De Niro co-owned Nobu before going on to mastermind the hugely successful openings of the May Fair, Leicester Square and Monmouth Kitchens.

It was an outstanding evening. The food was exquisite and the vibe buzzy and sophisticated. Manchester is certainly giving London a run for its money in the eating out stakes. The staff are truly great – if you can, do trust them to recommend dishes, you won’t regret it.