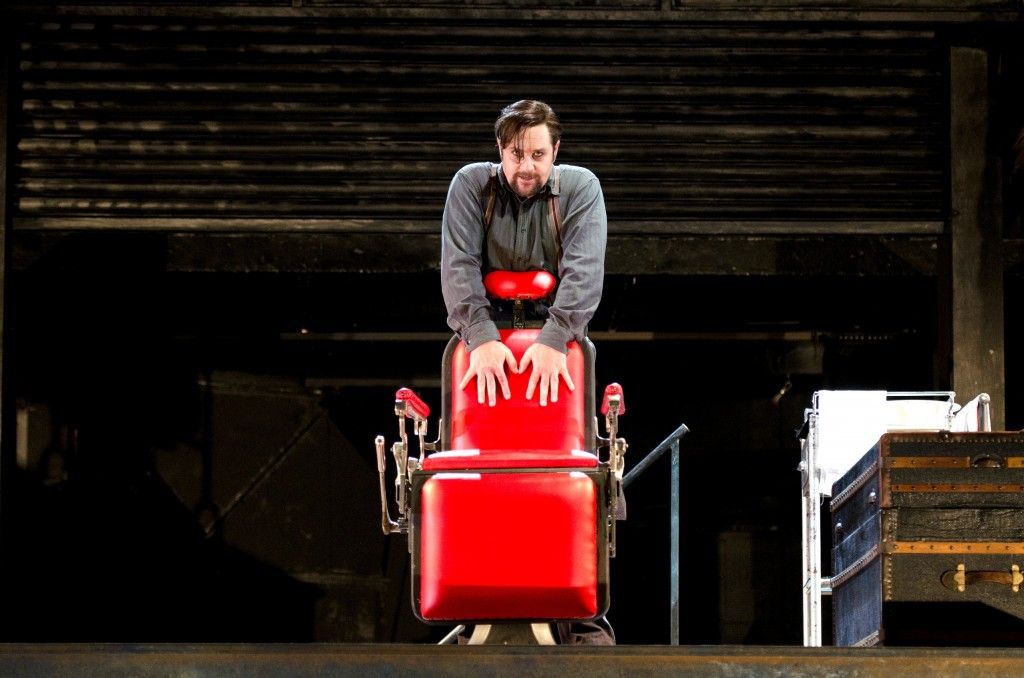 Everyone raved about Jonathan Kent’s production of Sweeney Todd when it opened at the Chichester Festival last year where it ran for six weeks and this West End transfer of Stephen Sondheim’s darker work does not fail to be gory!
From the moment Stephen Sondheim’s menacing score begins, clashing harmonies spilling from the powerful organ, your nerves are held in a vice. The tale is about the psychotic Todd who has returned to London from the penal colony of Australia.  He seeks his wife Lucy and daughter Johanna.  Frustrated, he sets out on a brutal campaign against mankind, serving ‘a dark and vengeful god’ after the evil Judge Turpin who stole his family from him and sent him away.  Michael Ball plays the title character Sweeney Todd and Ball is probably best known for his more joyous performances in the Laurence Olivier Award winning Hairspray and for singing Andrew Lloyd Webbers ‘Love changes everything’ but in this performance Michael changes everything!

Imelda Staunton (probably best known for wearing a bonnet in TV’s Cranford) plays Mrs Lovett, the down-at-heel pie shop owner who comes up with the tasty solution for disposing of all the bodies lying around Todd’s barber shop.  Staunton manages to bundle up womanly practicality, maternal instincts, unrequited devotion to Todd and utter menace into one perfect little package. Hearing her retch with horror, or delight, or curiosity, or pleasure over the first of Sweeney’s victims is both hideous and hilarious.

The evil Judge and his Beadle played by John Bowe and Peter Polycarpou are so nasty you want to boo at them and John Bowe’s scene where he sings about Johanna made you feel dirty and sickened at his behavior towards his ‘adopted’ daughter Johanna who he wants as his wife.

Todd’s daughter Johanna in an additional side-story falls in love with a sailor (who just so happened to be on the return ship with Todd).  The sickly sweet lovers (Luke Brady and Lucy May Barker) perform their underwritten parts with beautiful singing voices and add a touch of romance to the gory drama.
Updating the setting from the Victorian era to what seems to be the Thirties makes this production different to original performances set in the Victorian era.  Sondheim’s varied, complex score is intelligently served; musical director Nicholas Skillbeck has achieved a nicely balanced sound.  Anthony Ward’s tall, brooding set transforms impressively from a shadowy cylinder framed by dark metal gates into an abattoir and that red chair of Todd’s is rather impressive.

The performances of Michael Ball as the avenging demon barber and Imelda Staunton as a bustling, bravura, pie-eyed Mrs Lovett will remain definitive for a very long time . . . lift your razor high and go to the Adelphi Theatre now as the show does not disappoint (unless you are the man who sat in front of me, who was so scared he hid behind his hands!)  Gory but bloody enjoyable!