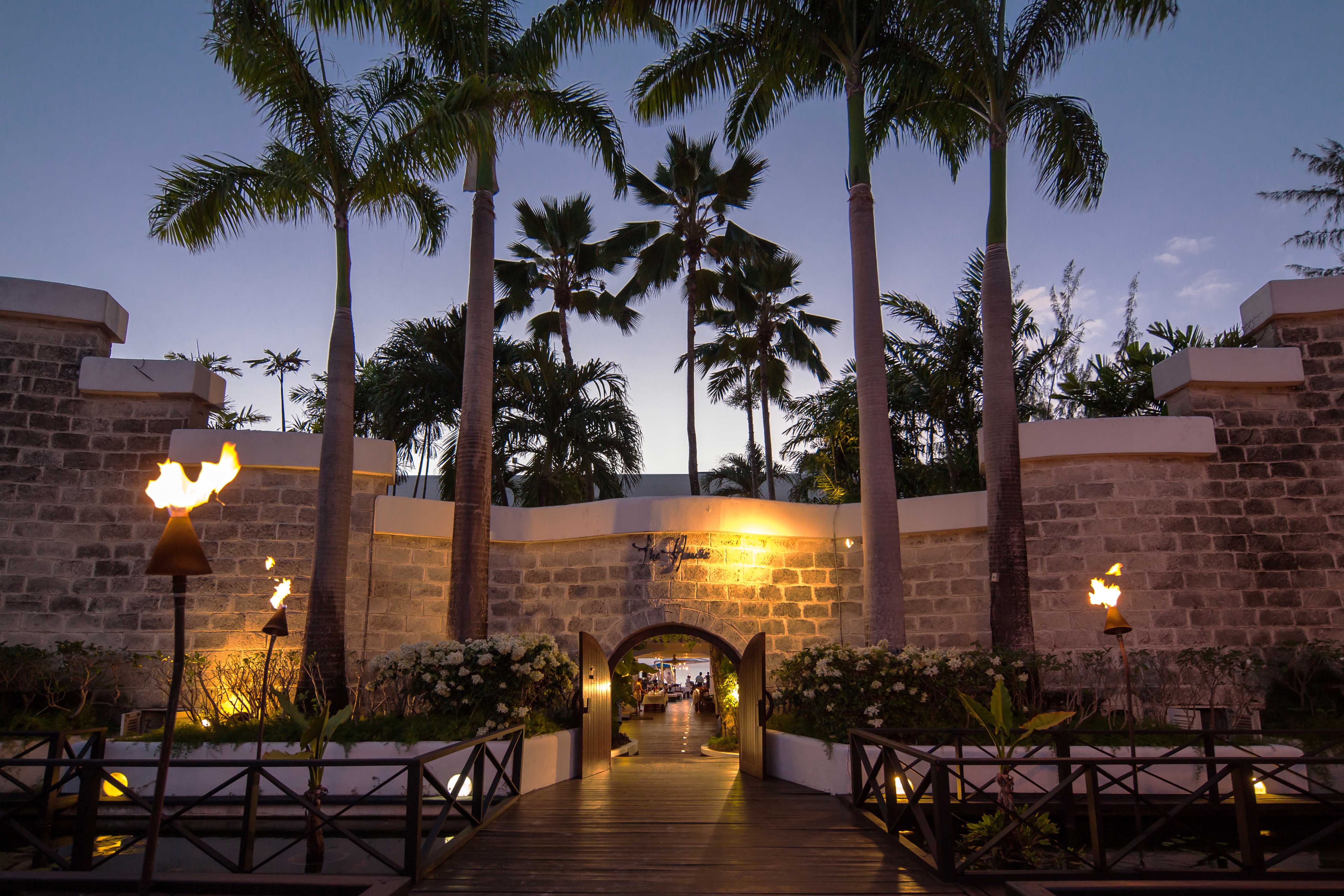 Although Winter was just starting to spread it’s cloak over the northern hemisphere, Cheeky and I were about to have one big climatic shock to the system by flying to the beautiful island of Barbados to experience The House plus their new ‘LX by the House’ Package. As we approached Barbados I was surprised at how green the island looked from the air, with the thriving green fields and forests it looked more like we were flying over Surrey than the Caribbean. Barbados was just leaving the wet season and entering in to their summer so the whole island looked lush and vibrant. As we exited the plane it was a pleasant and welcoming surprise to feel the warm sun on our skin, welcome to Barbados indeed! The passport queues were deliriously long, but luckily we were soon hunted down in the passport line to be moved to the fast track line, all part of the luxury experience thankfully, it was then off to our private transfer with Andy the driver.

We pulled into The House driveway; drove along a wooden bridge to the big wooden doors that led through the thick stonewalls. It felt like we had arrived at some kind of extravagant Bhajan castle. We were then led through The House to the beachfront deck where we were given cocktails and allowed to relax in the beautiful surroundings. The House has only 34 private junior and one-bedroom suites so the whole place feels quite intimate, and as an adult only resort it is a great place to unwind.

After finishing our delicious Bajan Sunsets it was then time to see our suite. Our room was spacious with a very comfortable king sized bed and large balcony with a view out to the Caribbean Sea and the sun setting beyond the horizon. Once we had freshened up and changed for the evening it was time for our beachside cabana dinner with Italian influenced dining supplied by the acclaimed Zagat-rated Daphne’s restaurant. What a wonderful experience, to eat locally caught produce by candle light whilst the Caribbean Sea breaks just yards from one’s feet. After this we found our way to The House bar and of course we proceeded with our mission to convert the world to drinking Espresso Martinis made with rum instead of vodka. Needless to say local rum was used and the bar staff were converted.

The next morning we woke to a Piper Heidsieck Champagne breakfast with all that one could eat from the buffet, one could even hand select the fruit and vegetables for the kitchen to turn into a smoothie or juice. I do not think I have ever drank a Champagne chaser with my morning smoothie, pure health kick decadence… I am a convert. Next up was our complimentary ‘Jet Lag Revival Massage’ under a beach cabana. Tonya went to work immediately locating the problem spots throughout the body, she knew exactly what she was doing working the knots firmly and getting the muscles to loosen up, just what one needed on the first morning of the holiday. Once loosened up it was time for some complimentary watersports, my travel companion Cheeky chose water skiing for the first time and I opted for a spot of wakeboarding. Having only ever wakeboarded on a cable, being behind a boat for the first time was quite a thrill and we decided that we would be back for more later that week.

Later that afternoon we prepared ourselves for the evening sunset cruise set up by Warren Yachting. We boarded the aptly named ‘Seaduced’ Catamaran and set sail along the ‘Platinum Coast’. The crew were fantastic, Josh multi tasked making sure that we were looked after like kings and queens with local cocktails like my favourite Rum Sour (adding that to my repertoire) as well as attending to the catamaran, Nick the captain manned the wheel whilst Yann prepared our dinner down below deck. By the time that the sun had gone down, we had worked our way down the coast so we set anchor and it was time to sit down to dinner with simple but succulent Kingfish, Chicken and Steak served with roasted veg and salad followed by Gluten Free brownies for Cheeky and I, this really was quite an extravagant experience, a great way to see more of the coast line.

The following day we started with more watersports. Firstly back to the waterskiing, during my session the heavens opened up and the rain came down which made for quite a dramatic experience, I just needed ‘The Ride of the Valkyrie’ playing in the background to complete the picture. After this we opted for a bit wobbly paddle boarding which was fairly easy to pick up after about 15 minutes and a few ungainly dunkings, it was then on to sea Kayaking. Once we wore ourselves out it was then time for a cooking demo with the Italian Marco Festini Cromer the Executive Chef of Daphne’s restaurant. Marco is a charming character who is absolutely dedicated and totally passionate about his cooking, which came across in the demo and in the very taste of his food. Cheeky was lucky, and as always, cheeky enough to take part in the pasta demo and ended up being offered a job as a sous chef at Daphne’s with her pasta skills, I thought I might have been leaving her in Barbados at that rate! Once we had devoured as much pasta and tuna from the demo it was then time to relax for the rest of the day until afternoon tea with canapés. It was then up to the rooms to scrub up and head over to Daphne’s to experience more of Marco and his team’s culinary creations.

The following day, it was time to explore the island of Barbados with our private driver Andy. Now Andy is a totally lovable character, but also a mind of information on the history of the island; what he did not know about Barbados was not worth knowing anyway. As he took us around the island he taught us the stories and the history of the place. We visited St. James Parish Church from the 1600s, the very first church on the island and we visited such places, as Speightstown the first major port and commercial centre of Barbados and Bathsheba on the rugged east coast of the island that looked more like a windswept part of the Scottish Highlands. However, the highlights of the day were St. Nicholas Abbey and Mount Gay, two very different rum factory tours with of course as much rum tasting as we could fit in!

The following day we were chauffeured off to Ape’s Hill Polo Club for our private Polo lesson. We had already sent the details of our sizes and horse riding experience, so when we arrived Jamie and Pablo had our polo equipment ready and waiting for us and our horses had already been allocated. I was riding Peregrina a very responsive horse who would canter with some encouragement whilst Cheeky was on Congita who needed a little more persuasion. It was straight onto our horses for a quick reminder of how to ride, then a lesson on how to use the polo mallet and how to ride Polo style. Once we all got the hang of swinging a mallet without falling off or knocking your horse out it was then time for a polo match. As soon as we started, everyone’s competitive streak kicked in and it was time to do battle; my first attempt at a goal fell about a foot short sadly, but I made sure my second shot had a bit more ‘umph’ behind it so it drove all the way past the goal and by the time we finished it was a draw between the two teams. Why have I never played Polo before? I have no idea why, but this must be remedied soon.

I have to say Barbados won our hearts. The House has a very intimate and relaxing atmosphere about it and the people of Barbados are some of the loveliest and most relaxed people I have met, quite a contrast to the modern day rat race of my hometown London. We really could feel ourselves unwind despite all the stimulating activities we got up to. Barbados has such a different feel from other hot coastal destinations, I now understand why people go back time and time again and that being said we are currently working on our plans for returning to the island as soon as humanly possible!

We experienced the ‘LX by the House’ package, other parts of package include a private shopping experience at a high-end boutique with a private driver and Island hopping with a flight charter to a neighbouring island. The package can be bought in full for $4,343 / £2,810 per person excluding accommodation or guests can select individual activities, with individual prices, to suit their requirements. Rooms at the house begin from $474 / £306 per night.